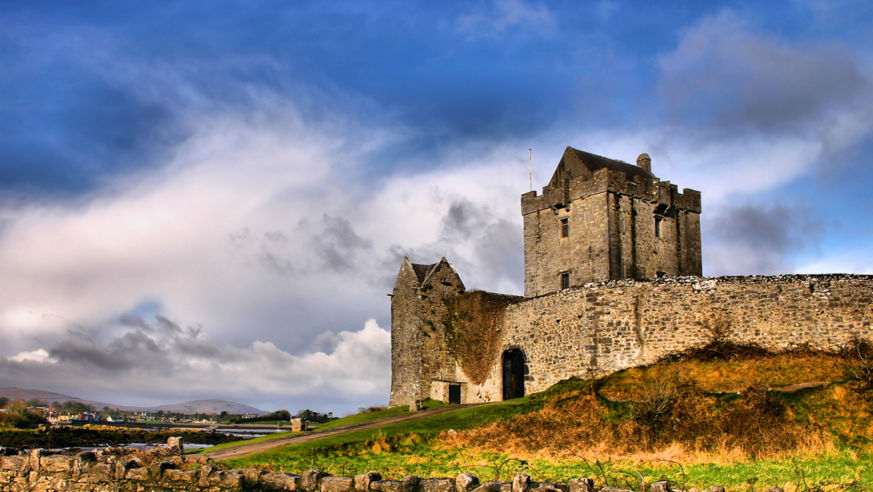 This article was written by Sophie Forbes and originally appeared on Yahoo Travel.

On May 22 the populationof Ireland voted, by a large majority, in favor of legalizing same-sex marriage in their country.

And now, just a week and a half later, the Emerald Isle is being pegged as the next big destination for gay weddings. Tourism Ireland has already launched a campaign to attract same-sex couples to the island to wed.

Just hours after the referendum result was announced, the agency released a video to YouTube called “Ireland Says YES to Love!”

The video ad shows a montage of some of Ireland’s most spectacular landscapes and landmarks—all potential wedding venues—from Lough Eske Castle to Carrowmore and Smock Alley Theatre.

The video also promotes the country’s famous Lisdoonvarna matchmaking and music festival, which has been a popular tradition for almost 160 years. In 2013 they launched the Outing, which is purely dedicated to the LGBT community. This year’s Outing takes place Oct. 2 to 4.

The gay marriage campaign has already generated huge international interest, and the ad has been viewed 30,000 times on YouTube alone. It is targeting nine international markets including Britain, the U.S., Canada, the Nordic countries, Australia, France, Germany, Italy, and Spain.

“Ireland is in the international spotlight and trending for all the right reasons across social and international media,” explained Tourism Ireland CEO Niall Gibbons. “It’s not often you get a blast of publicity like that.”

Ireland has a lot to offer couples looking for the perfect wedding destination and already has a booming wedding industry. Currently around 24,000 weddings a year take place in the country, in an industry worth more than $400 million.

The World Travel Market estimates that the annual spend on travel by the gay, lesbian, bisexual, and transgender community exceeded $200 billion for the first time last year.

This creates massive opportunities for all the local businesses now extending their services to same-sex couples—and tons of choice for couples themselves. Luckily, Tourism Ireland has a few helpful suggestions for soon-to-be brides and grooms to aid them on their quest for the perfect Irish venue.

A medieval castle situated on more than 650 acres of stunning parkland: This spot is simply perfect for a couple looking to add some dramatic flair to their event.

Overlooking a quaint fishing village, this classic but modern space gives couples the option to have a more minimalist look or dress the venue up to their liking.

This restored 17th-century theater, one of the world’s oldest, is elegant but rustic and right in the heart of the City Centre. Couples will feel immersed in history while enjoying the building’s incredible acoustics.

“The same sex Marriage Referendum was a watershed moment in Irish history for so many reasons. And as a gay man it was an incredible moment in my own life also. It is indescribable."

"As an event manager I've spent several years helping couples plan their weddings. Straight couples who never had to consider the legality of their union as it was an automatic right. Now that the referendum has passed things have utterly changed and changed for the better. As seen by the jubilant scenes in the courtyard of Dublin Castle on May 23rd.”

All of our weddings are bespoke and unique and we do our best to give the couple the day they have always dreamed of,” says Conor Byrne the Events Manager at Smock Alley. Whether it is a small simple intimate service or a large elaborate reception. We are an equal opportunities venue.”

Byrne hasn’t seen an influx of new bookings, but expects that to change after the new law officially goes into effect.

“The referendum has only just passed and is not due to be signed in to law until later this summer,” Byrne added. “I wouldn’t say that there has been an increase in business for weddings for same sex couples but I have met some a few so far and I’m sure this number will only increase.”

This spectacular castle, which dates back to the 17th century, is situated on 43 acres of perfectly manicured grounds and is now home to a five-star hotel and spa.

Close to Dublin’s City Centre, this gorgeous Georgian property sits on magical wooded grounds complete with its own rose garden, beautifully designed bedrooms, and even its own nightclub. It is also a short walk from the seafront. This spot is divine for those who want a little of everything.

"We have always engaged with same-sex marriage couples going way back, however now they can get married officially we are seeing an increase in viewings, said Patrick Reade, an event planner at Rosedale House. “We don’t provide anything the same regardless of who is coming to Rosedale and will create that exclusive, unique, special day for all our guests.”

9 Reasons Why County Mayo, Ireland, is the Perfect Family Getaway

I Hate Being Wet and Cold. So Why Did I Go Surfing in Ireland in October?