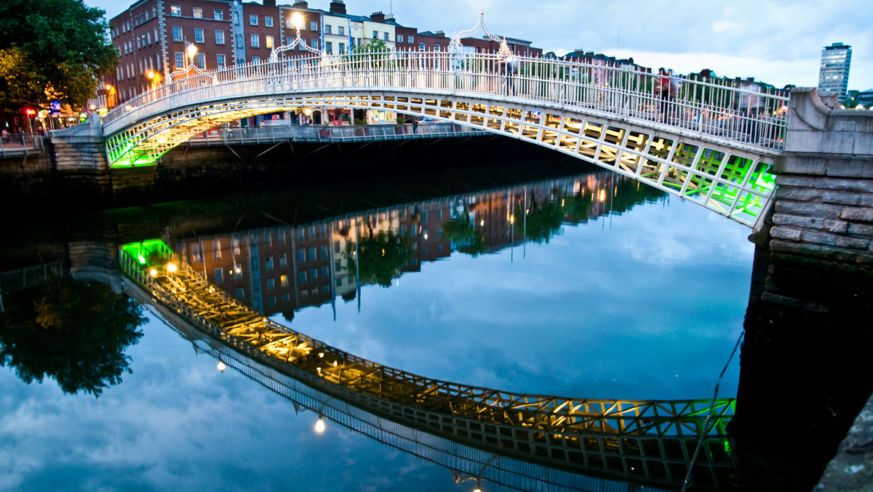 Dublin is home to literary sites such as the Abbey Theatre, Trinity College (where the Book of Kells is displayed), and Davy Byrnes Pub, immortalized in James Joyce's Ulysses.

From history to literature to natural wonders—not to mention music and merriment—this tiny island packs a vacation whollop. Just in time for St. Patrick's Day, here are 10 of Ireland's must-sees.

Whether you're headed to the Emerald Isle any time soon or simply window-shopping, we've rounded up 10 of the best attractions Ireland has to offer, from natural wonders on the Atlantic coast to Dublin's literary highlights, a world-famous castle, and traditional music and merriment.

This establishment on Dublin's Duke Street is mentioned in Irish novelist James Joyce's masterpiece, Ulysses, and attracts visitors from around the world for precisely that reason. Stop in for a pint of stout and a taste of the famed Dublin wit at the heart of Joyce's work.

Having presented the work of playwrights such as William Butler Yeats, John Millington Synge, and Samuel Beckett, Dublin's Abbey Theatre can rightly claim to be the treasure house of Irish literary culture. Catch a play, then follow the actors to a favorite nearby haunt, the Flowing Tide, for refreshment.

Founded in the 16th century by Queen Elizabeth I, this college, on the south bank of the River Liffey in central Dublin, boasts alumni that include Jonathan Swift, Oscar Wilde, and Samuel Beckett. Today, it is home to the iconic Book of Kells, a spectacular illuminated manuscript from the Middle Ages.

In County Meath, about 30 miles northwest of Dublin, this prehistoric passage tomb (a narrow passage made of large stones with a covered burial chamber) takes you back to 4000 B.C., a thousand years before England's Stonehenge. During the winter solstice, the rising sun shines through a small opening above the tomb's doorway, illuminating the chamber.

Yup, it's as touristy as it gets, but countless visitors have made the five-mile pilgrimage from Cork City to this impressive tower to kiss the legendary Blarney Stone (by some thoroughly unreliable accounts, a fragment of Jerusalem's Wailing Wall) in hopes of acquiring the gift of gab. Before you schlep all the way, be warned: In order for your lips to reach the storied stone, you have to lean backward over a parapet with an attendant holding your legs to keep you from falling.

A short boat ride from Rossaveal or Doolin will take you to these islands off the Atlantic coast where the Irish language is still spoken. The smallest of the islands, Inisheer, is like a time capsule of ancient Ireland, with its patchwork of fields and stone walls; the Hotel Inisheer is famed for traditional Irish music and merrymaking.

Towering 700 feet above the roaring Atlantic Ocean, these shale and sandstone cliffs, near the village of Liscannor about halfway between Kerry and Connemara, make you feel as if you are standing on the edge of the world. A visitors' center offers guided tours and on clear days you can see past the Aran Islands all the way to Connemara.

A 700-foot-high rock that rises from the sea off the Iveragh Peninsula in County Kerry, Skellig Michael can be reached by an hour-long boat ride from Valentia Island. But when you disembark your journey isn't complete; you can climb 650 small steps cut out of the rock to see the remains of a 7th-century Christian monastery.

Galway has been a mecca for cyclists for years, and the Maamturk Mountains offer gentle climbs that take you past pristine lakes and bogs, plus the opportunity to coast down into tiny Leenane, where the Atlantic Ocean flows into Killary Harbour.

North of Galway, this isolated park is home to red deer and falcons and offers some of the most beautiful hiking, such as the Derrylahan Trail and the Glen Walk through the Derryveagh Mountains.