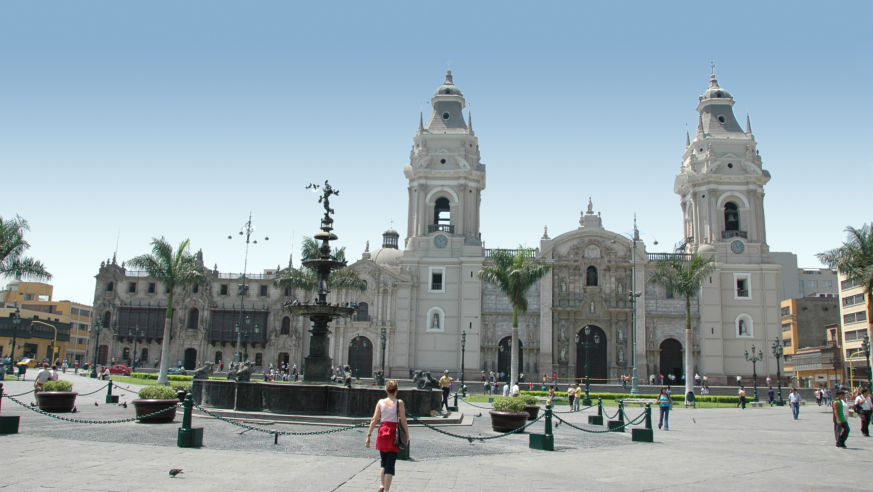 Here's how you can enjoy a budget-friendly holiday in Lima and save your money for other adventures around Peru.

Just because it's called the City of Kings doesn't mean you have to spend like one! Lima has plenty to offer the broke backpacker and savvy traveler, from gourmet meals to free galleries and events. Here's how you can enjoy a budget-friendly holiday in Lima and save your money for other adventures around Peru.

Take the Metro
When most newcomers first arrive in Lima, they rely solely on taxis to get around, which can cost upwards of ten soles (about four dollars) for a short trip. To give you some perspective, that's the same price as a full meal here in Lima. Taking taxis is also a time-waster because the traffic in Lima is unpredictable and you can end up spending a lot of time stuck in gridlock if you get caught traveling at the wrong time. Instead, save time and money by taking the Metropolitano, a system of buses that can get you from one end of the city to another for a flat rate of two soles. If you're staying in Miraflores, for instance, and you want to explore the historic city center, you can take the Metro from the stop called Benavides—where you can buy a card for as little as five soles and reload as necessary—to the stop called Estacion Central. The A, B, and C buses will get you there from the platform marked "Norte," usually in about twenty minutes tops. Meanwhile, the same trip via taxi would end up costing at least 12 soles one way, and if you go during rush hour, could last up to an hour.

Stick to Sites with Free Admission
In the center of Lima, you can visit two free museums, the Palacio de Gobierno in the Plaza Mayor and the Museo de Congreso y la Inquisicion (Jr. Junín 548). At the first site, you can take a free tour of the presidential palace. In the second, you can take a gruesome tour of the site where the Spanish Inquisition tried accused heretics and exacted punishments. All materials are in Spanish, but the displays definitely get the point across.

If you are going to be traveling to Lima during the summer months of January to March, you can enjoy the sunshine on the beaches in Barranco, a district just south of Miraflores. To get there, just hike down from the Parque de Barranco and cross the highway called Circuito de Playas. While you're in Barranco, you can check out the Galeria Delbarrio (Bernardino Cruz 148), just a fifteen minute walk south in nearby Chorrillos. It's a gallery set in a beautiful old mansion and serves as a showcase for independent artists' work and community art. The best part: it's free!

Enjoy a Walk Along the Malecón
With 43 unique districts, Lima is a massive urban sprawl. Some areas are definitely safer than others, but certain spots such as Miraflores, Barranco, San Isidro, and parts of the center are quite pleasant and nice for walking. One particularly breathtaking walk is along the Malecón, which snakes along the cliff tops of Miraflores and offers stunning views of the Pacific Ocean.

Gourmet Eats on a Backpacker's Budget
Lima has been making a name for itself as a gastronomic destination, with world class restaurants and fine dining options just about everywhere you look. But you don't have to break the bank to have a nice meal. On just about every street corner, you can find set-menu restaurants for 7-10 soles offering a range of traditional meals and everything from Andean stews to fresh ceviche. Walk along the street and take your pick of the chalkboard signs advertising the day's offerings.

This article was written by Sophia Guida, who has been living in Lima, Peru, on and off since the beginning of 2012, where she works as a freelance writer/photojournalist and takes every opportunity to explore the areas left out of the guidebooks. You can find her on Twitter, Instagram and Tumblr. She wrote this article on behalf of Peru for Less, experts in providing tours to Lima and all over Peru.