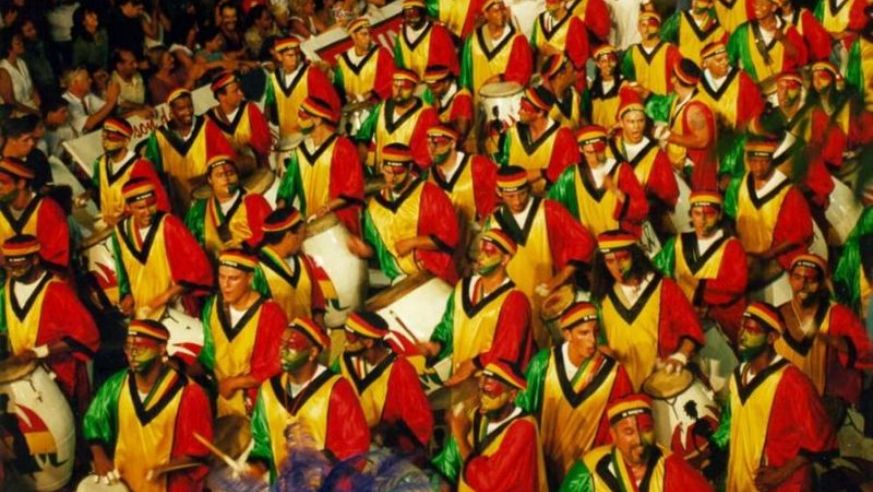 Visit Montevideo during the longest Carnival celebration in the world.

This article was written by Lisa Marie Mercer on behalf of Tucan Travel, providers of tours to Uruguay, South America, and beyond. In 2011, after exploring most parts of the globe, she and her husband wandered off to Uruguay, and decided to give it a new name: home.

The Story Behind Carnival
Carnival—also called Mardi Gras or Fat Tuesday—dates back to pagan fertility festivals, including the rambunctious Roman festival of Saturnalia, before the arrival of Christianity brought religion to Rome. Although the priests did not condone any type of hedonistic celebration, they realized the futility of any attempt to abolish the festivities. Instead, the priests figured "if you can't beat them, join them," and incorporated the events into their religious rituals. It so came to pass that Mardi Gras took place on Tuesday on the day before Ash Wednesday, the beginning of lent. It represented a last chance for binging and merrymaking before the forthcoming period of austerity and sacrifice.

That's not how Carnival evolved in Uruguay. As a country that places high value on the separation between church and state, Uruguay refers to Christmas morning as Family Day, and Holy Week as Tourism Week. Yet, having endured many years under a fascist dictatorship, Uruguayans understand the value of freedom of the human spirit, which the Carnival celebration embraces with open arms.

Despite Uruguay's South American location, about 93 percent of its citizens claim European descent. In 1750, the monied European families residing in Montevideo decided to import slaves from Eastern, Equatorial and Western African countries. The slaves, stripped of their culture and ethnicity, would often gather to practice candombe, a drum-based dance and music form, indigenous to the various African cultures. Its lyrics conveyed nostalgia for the homeland, and the despair at being forced into slavery. Uruguay eventually abolished slavery, but candombe prevailed as an art form. During the 20th century, the ethnic music and dance form evolved into Carnival, and became a municipally sanctioned annual event.

Preparations
Although Carnival usually takes place in February or March, preparations for it begin in December. Groups of men, and sometimes a few women, parade through Montevideo's Barrio Sur, their handcrafted wooden drums slung across their chests. These comparsas, as they are called, are rehearsing for the Llamadas, the event that signals the start of Carnival. In 2005, the first group of female candombe drummers entered the Carnival scene.  A total of 78 women now form La Melaza, and all-female candombe group. In the past, dressing in scantily-clad outfits and performing seductive rhythmic dances was the role of the female Carnival performer; now they play the big drums and help make the music. Meanwhile, the election of the zonal carnival queens usually takes place in December, and the Carnival of Promises, a children's parade, happens in January.

A Time Of Celebration
On the first night of Carnival, thousands of drummers, dancers, and flag wavers march through the streets of Montevideo. This is not just a parade. The different comparsas compete for the best dancers, costumes, and strongest drum beats. Later on, in addition to the music and dancing, the Murgas, a type of street performer, entertain visitors with their satirical comedy acts, which are often of a political nature. The Lubolos are white men who paint their faces black, and perform the songs of the former African slaves. Although this might evoke images of the racist minstrel shows of yesteryear, its intent is quite different. The minstrel show expressed mockery. In contrast, the Lubolo performance is a form of empathy, and perhaps, a belated, albeit awkward apology.

One final tip: Hotels book up early during Carnival season. If you plan to go, make your reservations as early as possible.