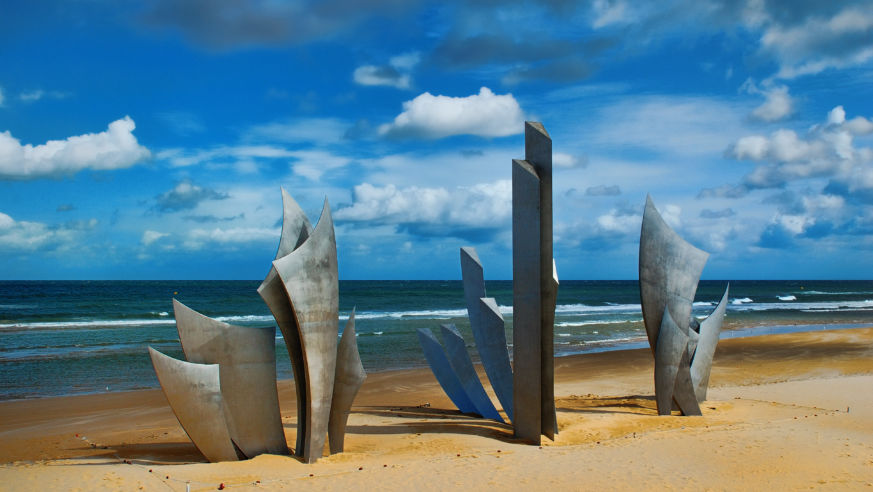 June 6th, 2014, marks the 70th anniversary of one of the most memorable battles in history, D-Day, when Allied forces stormed the beaches of Northern France, effectively changing the tide of war in favor of victory.

This is an exciting time to be in France's Normandy region, home to picturesque cities like Honfleur, Bayeux, and Caen, as well as popular scenic sites like Mont St. Michel, a UNESCO world heritage site that shouldn't be missed if you're in the area. The region is celebrating the 70th Anniversary of D-Day by hosting a series of events from June 1-15 including a parade of D-Day amphibious jeeps and British boats on June 5th at Carentan, a Memorial Parade and Concert for Peace on Friday, June 6th, at Sainte Mère Église, Glenn Miller style concerts on the beaches of Arromanches followed by an impressive fireworks display, an air show on June 7th, a Liberty Dance in Bayeux with Big Band Jazz music, and festive family picnics on Omaha Beach. A parachuting display will take place Sunday, June 8th, at Sainte Mère Église, and three 1940s-era military camps will be set up in Carentan, Sainte Mère Église, and Vierville Sur Mere to demonstrate what military life was like in an American military camp, for paratroopers, and post-liberation. Click here for a full list of area events.

I'm going to be visiting the area from June 3–8, touring the WWII sites, beaches, and memorials, visiting the festivities, and hearing accounts from Veterans who were there that day. I'm going to be staying just outside the town of Bayeux at theHotel iBis Budget Bayeux, an Accor Hotel we featured on our "World's Best Budget Hotels" Pinterest board. By the time I booked my trip, car rentals in the area were down to only manual shift vehicles (which, unfortunately, I don't know how to drive) and overpriced BMW automatic shift cars that would cost upwards of $500 for just a few days, not to mention the fact that gas is now running $7–$8 a gallon! I was able to find a company in Bayeux called Bayeux Shuttle that runs day-trips to all the big sites and attractions—I'll be taking a full-day tour of the Normandy Beaches and Memorials one day, taking a half-day trip to Mont St. Michel, and testing out the local bus routes (and inevitably, taxis) as I make my way to various events along the coast. I've been reading about affordable bike rentals in Bayeux, so might look into that as well. I'll be posting photos to our Budget Travel Instagram Page, so follow along as I explore this beautiful region, and visit our new "Stunning Scenes From France" Pinterest board to get a better idea of where I'll be heading.

On a personal note, my grandfather on my father's side was actually supposed to fight on the Normandy Beaches that day—he was stationed somewhere in Morocco with the U.S. Navy but got pneumonia right before his regiment was shipped out to France and had to stay behind. It's crazy to think I might not even be here today if he had gone—and to think I'll be visiting Normandy for him all these years later.

We want to hear from you: have you ever visited the WWII sites of Northern France? Have you explored the Normandy region without a car? Tell us all about it below!