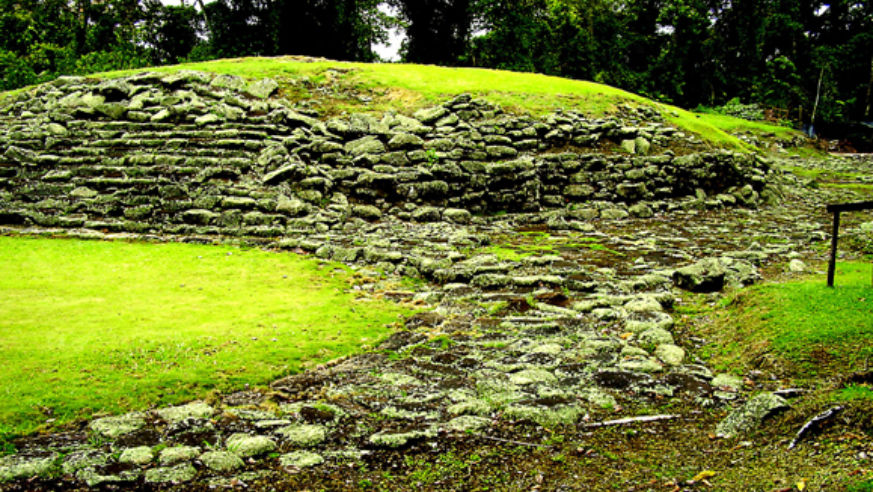 The mist slowly dissolved and trees and vines became visible. Other shapes, not from nature, also materialized through the morning drizzle. It was my first glimpse of Guayabo, Costa Rica's ancient lost city. The patina of antiquity on these rock walls and roadways made them look like they have always been here in the highland jungle.

Guayabo's earliest structures date from 3,000 years ago. The peak of the city was between 800 and 1300 AD when up to 5,000 people lived here. By the time the first Spanish arrived in 1502, the site had long been abandoned and overgrown. The remains seen today are stone cobbled roadways, foundations, aqueducts, fountains, and drainage systems, and the waterworks still function after 3,000 years. One fountain reminded me of the Inca royal baths near Cuzco. Below Guayabo's bathtub-sized pool is a larger reservoir, replenished from the smaller pool. Cattle watered here 50 years ago in the same place where kings and queens once bathed in the regal splendor of cleansing ceremonies.

Little is known about the way of life because the archeological context is lost, with most of the more intricate objects looted or re-purposed by local people over the past century and a half. Until 1973, when it was declared a national monument, the Guayabo site was used as a cattle pasture. Petroglyphs carved into the larger stones depict animals, including an alligator and a jaguar. One controversial example is a spiral design that has been theorized as a map of the community. Other curvilinear forms carved into rock might have been a form of writing.

The extent of Guayabo was only realized after NASA images taken from space were analyzed. Based on these photographs, archeologists are certain that the excavated portion that is on display is the true center of the community. Several similar cities, along with connecting cobbled roads, were recently found with the help of NASA space imagery. Only a small part of Guayabo has been cleared from the jungle. A still smaller portion has been fully excavated. Among the objects unearthed are small jade and gold ornaments, as well as larger stone statues depicting jaguars, crocodiles, and other powerful predators. Anthropologists think these had religious, shamanistic, as well as political significance. In 1882 Anastasio Alfario, director of Costa Rica's National Museum began digging at the site shortly after it was discovered by farmers who colonized the area. In 1968, Professor Carlos Aguilar and the University of Costa Rica began excavations in a plan that is still being followed. Today excavation and interpretation are being carried out by the University of Costa Rica with the National System of Conservation Areas. Researchers from American and British universities are also involved.

Guayabo is located at 1,150 meters above sea level where the atmosphere is a little cooler, but the Caribbean watershed is a very damp place and nothing made of wood or fabric lasts too long if left exposed. The structures that have been restored include stone foundations in a circular pattern that were the base for huge conical residential buildings, like teepees of wood.

To get to Guayabo, you must first travel to Turrialba, a city with a population of about 30,000. A mid-morning bus leaves Turrialba's main station and you can catch the return bus at 3:30 p.m. The route is very scenic. If you're driving, take Highway 1 from San Jose, through Cartago and Turrialba, continuing through town and across the bridge. It is 84 kilometers from the capital. Admission is six dollars and guided tours are available twice daily. There is also a nature trail where you might get a glimpse of toucans, woodpeckers, thrushes, and other birds, as well as coatis, armadillos, sloths, lizards, snakes, and butterflies. You can camp near the ruins, though services are limited to just restrooms and picnic tables. Archeological tourism is on the rise in Costa Rica. The Park and Museum of the Stone Spheres opened in April 2014, and other new sites are also being considered for excavation and interpretation.

Born in The Hague, Andrew Kolasinski arrived in Canada as a small child riding in the luggage rack of a DC-7. Since then he has felt at home anywhere. As the publisher and editor of Island Angler, Andrew spends half the year fishing for salmon and trout, and in the off-season he travels the world looking for a story. He wrote this article for South American Vacations, specialists in Costa Rica tours and travel all over Latin America.