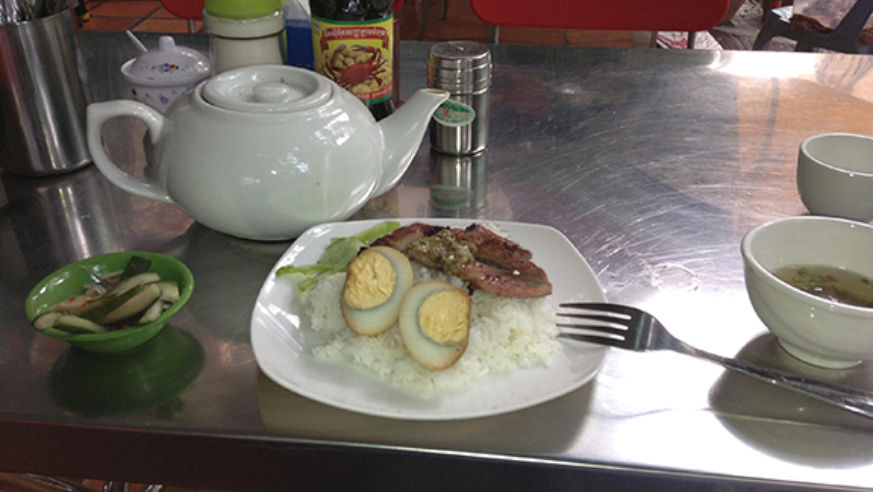 The waitress brought exactly what I ordered, but it still came as a surprise. Instead of a plate, my Fish Amok was served in a coconut shell. The classic Cambodian dish was presented made with freshly caught fish from the Gulf of Thailand.

Cambodia's culinary traditions are made with the bounty of the land and water, with influences brought by successive invaders and visitors that have given variety to the Khmer approach to preparing food. The annual monsoon floods enrich the soil around the Mekong and Tonei Sap. The river system is one of the most diverse habitats on earth, and fishing has always been central to the Khmer economy.

A paste made of fermented fish, Prahok, is a key flavoring agent, both as a sauce and mixed into meat, rice and other dishes.

Cambodia's climate and topography make ideal conditions for growing spices. Kampot Pepper, the King of Peppers, is prized for its aromatic floral qualities. The Cardamom Mountains are the indigenous home of the eponymous spice. The Khmer also use cardamom and Kampot Pepper for their medicinal properties to soothe a variety of complaints. Other homegrown spices include tamarind, ginger, lemongrass and Kaffir lime leaves.

International flavors also characterize Cambodian cuisine. The influences of India are as evident in the temples and monuments of Angkor Wat as they are on the Cambodian table; Indian style curry (Kan) is on most menus.

The years of French colonial rule also left a taste for baguettes (Nom Pang), and as a result, Cambodia is the only Asian country where bread outweighs rice. The French also left recipes for paté, chocolate desserts, and beer, as well as French roast coffee.

Cambodia is also influenced by its neighbors as Thai, Laotian and Vietnamese food are widely available. These nations all use sauces that rely on coconut cream, sugar, and chili.

Chinese immigrants have also brought their traditions, and rice noodles have been embraced by the Khmer people. Early explorers from Spain, Holland, and Portugal brought potatoes, corn, peanuts, and chili peppers from the Americas.

The most popular, and most distinctly Khmer dishes, are Amok and Lok Lak. Amok is a curry in banana leaves. The sauce is made of coconut cream. It's usually made with fish, but can be prepared with chicken, beef, or pork. It can also be made for vegetarians, with eggs, bamboo shoots, or tofu served appealingly over banana leaves. Lok Lak is a stir fried beef dish with onions, tomatoes and a black pepper sauce.

On the coast, Kampot Pepper Crab (Kdam Cha Mrich Kcchei) brings together the King of Pepper with fresh local seafood. Spices, fish paste, and pepper on the vine are served with crab in the shell. Only freshly picked green peppers are used.

Other popular Khmer meals include Babor, a rice porridge and pork bullion, a Khmer variation of a Chinese dish. Another adaption is Bai Cha, which is fried rice with sausage. Kuy Teav is a breakfast of rice noodles, a piece of pork, and egg and pickled vegetables. Num Bamh Chok is bean sprouts, mint, and vegetables infused with curry and poured over noodles. An interesting dessert called Kralan, is a sweet rice pastry with coconut, beans and sesame, cooked inside a bamboo pole.

People come to Cambodia from all over the world to sightsee and learn about the country's vast history, but you can actually taste it as well.

Born in The Hague, Andrew Kolasinski arrived in Canada as a small child riding in the luggage rack of a DC-7. Since then he has felt at home anywhere. As the publisher and editor of Island Angler, Andrew spends half the year fishing for salmon and trout, and in the off-season he travels the world looking for a story. This article was written on behalf of Tucan Travel, providers of tour packages to Cambodia and all over Asia.