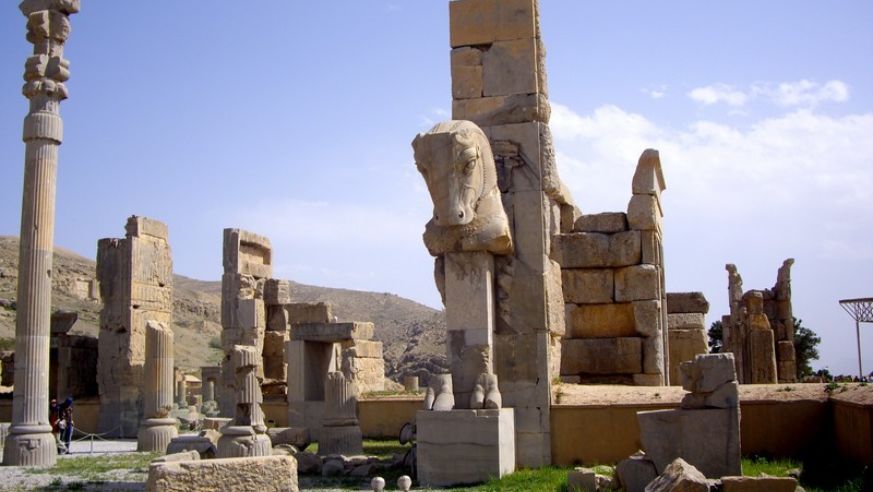 The stone-carved grandeur of 2,500-year old Persepolis, the capital of ancient Persia, pictured here, one of Iran's 19 UNESCO World Heritage sites, the most of any country in the Middle East.

This article was written by Audrey Scott and Daniel Noll and originally appeared on Yahoo Travel.

Before we set off to Iran there was fear. Not so much from within us, but certainly from our family and friends, those usually unequivocal in their support of our travels. During our pre-trip round of phone calls the night before our departure, the tone of some of the goodbyes seemed to imply some thought it just might be for good.

Such was the response to us, an American couple, going to Iran.

With the recent nuclear deal, interest in travel to Iran is again on the rise. And with this, questions arise: “What did it feel like to travel in Iran as Americans? Is it safe? And why make the effort to visit Iran anyway?”

Traveling in Iran as Americans: Our experience, it surprises people—we sometimes think they don’t believe us when we tell them that Iran was the country where we felt most like rock stars. Truly. From the markets of Tehran, to the mosques of Shiraz, even in the dining car of a train across northern Iran to Turkey, we—the Americans—were the unwitting stars of the show.

Iranians are a curious lot. When we revealed that we were American, their excitement level would rise noticeably. They wanted their photos taken with us, invited us for tea, and even showed us off to friends, as if to say, “Look what I found!” Others in our group, Europeans and Australians among them, were welcomed warmly, but their nationalities didn’t seem to carry quite the same draw. Honestly, we were flattered. And sometimes embarrassed by the attention.

Take, for example, our visit to the covered bazaar in Shiraz with another American woman in our group. An old man asked us where we were from and what we were looking for at the bazaar: “We’re Americans and are just curious.
We don’t have markets like this in our country,” we said.

He asked us to wait. After a few minutes, he returned with gift boxes of Iranian cookies and sweets for us to take home to our families. We were barely able to leave the bazaar for all the invitations—to tea and to people’s homes—in the city and halfway across the country.

Related: Hot Springs of Iran: the Next Spa Lover’s Fantasy

Only later, after returning to our hotel and turning on the television, did we learn the irony of our day: It happened to be the anniversary of Iran’s taking of the American hostages in 1979. International news channels were filled with scenes of demonstrations flush with dancing “Death to America” posters and flaming American flags.

It reminded us of the repeated message from ordinary Iranians we’d met on the street: “People are people, governments are governments. Please tell your friends about the real Iran.”

So why travel to Iran? The country is culturally rich and visual varied. From the stone-carved grandeur of 2,500-year old Persepolis, the capital of ancient Persia and the setting of the first verbal expression of universal human rights, to the dizzying bits of Islamic tile work in mosques throughout the country, the place is a formidable mountain of history. It’s no surprise that Iran boasts 19 UNESCO World Heritage sites, the most of any country in the Middle East.

Then there are the covered bazaars, some of which are over 800 years old, where you can get lost in miles of alleys filled with spice piles and warrens clogged with old men haggling over the fiber count of locally woven carpets. Teahouses, where friends gather for conversation, sweet tea and hookah pipes filled with fruit tobacco, give a taste and glimpse of the social pulse.

Related: Solo + Woman + Iran = Insane? Our Writer Did It

At the moment, in order for Americans (as well as Canadian and U.K. citizens) to obtain an Iranian tourist visa, they must either book an organized tour or travel with an authorized private guide. During our trip to Iran, we did both—a small-group tour with tour company G Adventures followed by a one-week trip on our own with a local Iranian guide. Even if you are an ardent independent traveler as we both are, don’t let this requirement deter you. We enjoyed ample time on our own to explore and engage, so that we might come away with our own story of Iran and its people.

WATCH: Avalanches, Death Threats, and No Lifts. Welcome to the World’s Most Dangerous Ski Race