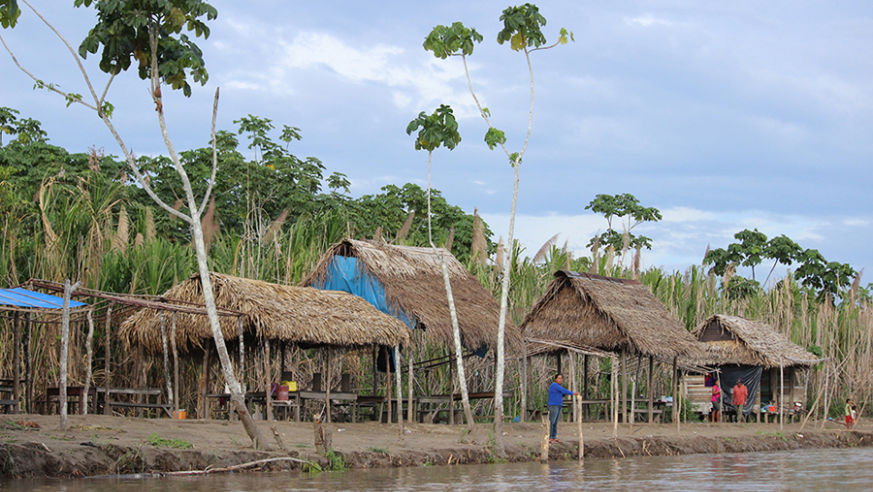 Tara Leigh has traveled extensively in South America, where she had a wonderful time enjoying the food, taking in the sights, and meeting the people of that fantastic continent. This article was written on behalf of the Tambo Blanquillo, a family-owned Amazon jungle lodge.

As my plane took off from the Lima airport, I watched the Pacific Ocean sparkle below in the summer sun. I was on my way to Pucallpa to meet my Shipibo friend Wilder, who'd invited me to participate in an Ayahuasca ceremony in his community 15 hours up the Rio Ucayali in the Peruvian Amazon. I was super-excited about this amazing opportunity, but a little pensive as well, not knowing what to expect on this journey so deep into the Amazon!

The immense, snow-covered peaks of the Andes pierced the clouds below the plane, and dipped down into rolling hills that gave way to the flat, green expanse of the Amazonian rainforest. Descending onto the tarmac, I marveled at how the trees completely blanketed the earth, interrupted only occasionally by a muddy river snaking through their midst.

Wilder and his friend, an anthropology student from Argentina, met me at the Pucallpa airport. After stopping at Wilder's house to pick up a few more people, we took moto-taxis to the tiny, bustling Pucallpa dock to find a place on the crowded boat that would take us to our destinatination. We climbed onto the rusty, electric green barge by way of a precarious gangplank and strung our hammocks up together near the middle of the boat, where they levitated over crates of pop, packages of toilet paper rolls, and bags of rice destined for the villages up river. Passing tugboats hauling garbage and lanchas ferrying passengers to neighboring riverside communities, our boat left the harbour for the open river. A bit stifled by the crowd below, we climbed onto the roof of the boat and watched the green riverbanks roll by for hours, enjoying the river's breeze on our faces. As the sky began to turn pink with the sun's departure, the mosquitos chased me back down to my hammock for the night, where I tried (with little success!) to catch a bit of sleep before our arrival.

We arrived at the muddy riverbank of the community at 4:30 a.m. Wilder's mom, a diminutive but strong Shipibo woman who wore no shoes, greeted us there with boys who quietly ferried our luggage into the waiting moto-truck. We piled into the back of the truck and drove to the village, as Wilder's mom good-naturedly cawed driving instructions him in Shipibo while he navigated the pot-holed dirt road.

Mindful of the need to fast for the ceremony that evening, Wilder's cousins prepared us a small breakfast that morning of plantains, sugar cane, and tea. We literally hung around in our hammocks for a few hours, chatting and drinking maté until Wilder returned from some errands and drove us to the local creek to swim. We stopped to pick guavas and guanabanas on the way, which we feasted on for the rest of our jolty ride. After a few hours of swimming in the creek's clear, cool waters, we rested until it was time to head to the moloka for the Ayahuasca ceremony that evening.

The Ayahuasca ceremony was a powerful healing experience. Wilder and his mother's Shipibo Icaros were incredibly beautiful, and their loving presence made me feel healed and protected. I woke up the next day feeling elated and clear-headed, full of gratitude and love for these wonderful people.

Soon, though, it was time for me catch the boat to Pucallpa, and after a quick lunch and some warm hugs from Wilder's mom, I was ferried off in a community boat to wait for the "barco rapido" in the nearby village. The boat never stopped for us, however, as it seems an earlier rainstorm delayed its departure, causing it to fill up faster than usual! With few other options for transit, Wilder offered to take me, and the other would-be passengers, all the way to Pucallpa in his little boat. We gladly took him up on his offer, and piled in! Wilder hung my hammock up inside the boat, and I stayed there until we reached Pucallpa, watching the river scenery slip by as we motored along. A perfect end to a perfect trip!