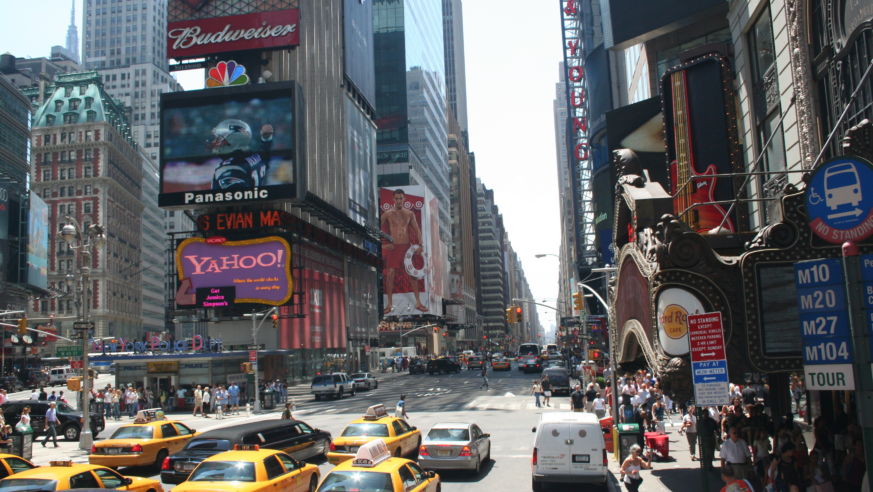 Whether you're in town for the big game or planning your next trip to the Big Apple, we've rounded up some fun attractions you won't want to miss!

All eyes will be on the Tri-state area this weekend thanks to Super Bowl XLVIII, happening Sunday, Feb. 2nd, at MetLife Stadium in East Rutherford, New Jersey. Whether you're in town for the big game—The Denver Broncos take on the Seattle Seahawks this year—or planning your next trip to the Big Apple, we've rounded up some fun attractions you won't want to miss!

Manhattan
If you're in Manhattan Friday or Saturday, stop by Times Square, aka. Super Bowl Boulevard, an interactive football-themed playground set up from 12 p.m. to 10 p.m. on Broadway between 34th and 47th Streets. Kick a football through goalposts set up between 45th and 46th Streets, visit the Vince Lombardi Trophy (between 43rd and 44th Streets), take a souvenir photo with giant Super Bowl XLVIII roman numerals (between 42nd and 43rd Streets), watch 10-minute videos of NFL footage projected on the outside of Macy's at Herald Square, take a ride down the giant Tobaggan slide (tickets are $5; between 40th and 41st Streets), and stop by the Autograph and Concert Stage between 39th and 40th Streets to meet former NFL players and see a performance by Blondie at 8:30 p.m. on Saturday, Feb. 1st. Stop by the NYC & Company Welcome Center, located on Broadway between 43rd and 44th Streets, to find out about more Super Bowl events happening around the five boroughs.

If football isn't your forte, take in a Broadway show—you can save money this weekend with 2-For-1 tickets during Broadway Week. And mark your calendars: NYC Restaurant Week is coming up from Feb. 17th thru Mar. 7th and will feature three-course lunches for $25 and $38 three-course dinners at some of the Big Apple's best restaurants.

While you're in the neighborhood, visit NYC's other boroughs—Queens, Brooklyn, Staten Island, and the Bronx.

Queens
I'm a Queens girl—born in Floral Park, raised in Hawaii and Florida, and now back in Bayside. There's a lot going on in Queens, New York City's most ethnically diverse borough, and if you have time, take a $2.50 ride on the 7 train from Times Square for a chance to visit Astoria (you'll need to switch to the N or Q train at the Queensborough Plaza station), Long Island City, Jackson Heights, and Flushing. In Astoria, the Bohemian Hall and Beer Garden is worth a visit, as are the Museum of the Moving Image, The Noguchi Museum, and any number of restaurants and bars in the area—stop by Cronin & Phelan's Saturday nights at 11 p.m.for Starlight Karaoke, a legendary experience involving the Irish bartender who runs karaoke while performing stand up comedy and magic tricks in between sets. If you're a foodie, don't miss the opportunity to explore Jackson Heights—the epitome of the phrase "melting pot," where you can find Indian, Middle Eastern, Himalayan, and Peruvian food all within a few blocks—and Flushing, home to NYC's largest Chinatown. If you're short on time, Vayable.com offers several Queens Food Tours to choose from—I took the Queens Tastes of the World tour last summer, a three-hour guided walking tour for $59 per person that includes all your food samples and non-alcoholic beverages; truly a delicious way to spend a day. Tours can be booked online and usually take place Monday thru Friday around 1:30 p.m.

Brooklyn
We've already written about why Brooklyn is worth checking out, but it bears repeating. Roam the hip and trendy Williamsburg and Greenpoint neighborhoods, a great spot to find indie bookstores and boutiques; see a concert or a game at the Barclays Center; get some culture at the Brooklyn Academy of Music and Brooklyn Museum; picnic or go for a walk in Prospect Park—kids will love the Prospect Park Zoo!—treat yourself to a tasty lobster roll in Red Hook; spend the day along the Atlantic at Coney Island; or explore scenic Brooklyn Bridge Park for great views of Lower Manhattan. If you're short on time, Brooklyn Bike Tours is a great option with several themed, guided trips to help you get a taste of this fascinating borough.

The Bronx
The northernmost borough is home to Yankee Stadium (guided tours are available during the off-season), Fordham University, the Bronx Zoo, The New York Botanical Garden, Edgar Allen Poe Cottage, Bronx Museum of the Arts, and Arthur Avenue, a Little Italy-esque area where you can find delicious Italian food along East 187th Street. There's also a free Bronx Culture Trolley that stops along the South Bronx Cultural Corridor, home to many artsy venues, galleries, theaters, and museums. For amazing seafood and views of Manhattan, visit City Island, a historic seaside village that feels more like something you'd expect to find in Key West rather than in New York City. Bring your appetite and be ready to eat your weight in crab, lobster, and clams at any of these restaurants.

Staten Island
Treat yourself to a free ride on the Staten Island Ferry from the bottom of Manhattan (take the R train to Whitehall St. or the 1 train to South Ferry) for gorgeous views of the Statue of Liberty and Ellis Island, and visit St. George neighborhood, one of New York City's hidden gems and home to the historic St. George Theatre, the Staten Island September 11th Memorial, the Staten Island Museum, and starting in 2016, it will feature the New York Wheel. For an interesting day trip, stop by the Snug Harbor Cultural Center & Botanical Garden to explore 23 historic buildings, nine botanical gardens, and 10 acres of natural wetlands. You can also take the Staten Island Ferry and transfer to the Staten Island Railway for a day trip to Tompkinsville, otherwise known as Little Sri Lanka, for a chance to explore this rich culture and its delicious cuisine.