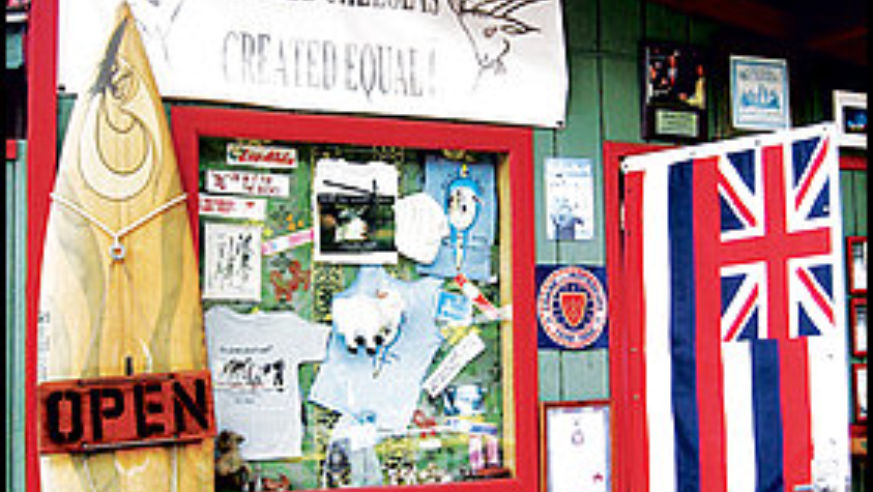 Between the hula shows and umbrella drinks, authentic Maui can feel like an afterthought. Not so on a day's drive to the low-key paradise of Upcountry.

While Hawaii might not leap to mind as a cowboy state, local paniolo have been herding cattle over these islands since the early 1800s. Far from the coconut bras and all-you-can-eat luaus dominating Maui's beaches, you'll find parts of this other Hawaii, one of rolling green ranchland and hulking volcanoes, where cowboys rub shoulders with foreign expats and hippy trustafarians, all of them carving out a little piece of tropical Eden they're eager to protect. Upcountry, as it's called, is insular and beautiful—and after a few days soaking up sun on the coast with my friend Lisa, it sounded like just the change of scene we were looking for.

One morning we loaded up our rented Ford Mustang convertible and set off for the small seaside town of Paia. A refuge of stoners, surfers, and celebrities like Woody Harrelson and Willie Nelson, Paia sits right on Baldwin Avenue, which leads south into Upcountry. Before we blew out of town, we stopped at Mana Foods, a local Whole Foods–type health market (49 Baldwin Ave., manafoodsmaui.com), where we stocked up on salty plantain chips, organic papaya, a crisp green salad, and—under the scornful eye of the checkout girl—enough bottled water to reconstitute an iceberg. (It may have been over-zealous, but with visions of getting stranded Lost-style in our heads, we went overboard with provisions.)

Once on the road in earnest, we began to climb almost immediately, rising 1,400 feet past rows of pineapple into the countryside around Makawao. The ranching community is at the heart of Maui's paniolo culture: The streets are dotted with Old West storefronts and tack shops, and the customers come off like a mix of John Wayne and Jack Johnson. Lisa and I skipped the saddle store and made a beeline instead for Market Fresh Bistro, one of Maui's newer culinary outposts. What the café lacks in creative naming, it makes up for in deliciousness, with farm-to-table salads and pasta that actually tastes like the fresh tomatoes it's tossed with (3620 Baldwin Ave. #102A, 808/572-4877, salads from $8).

After lunch, we continued south along the Kula Highway, a two-lane, nearly empty road that could easily qualify as one of the world's most spectacular: We dipped under blooming jacaranda trees and zipped past cattle ranches and fields of colorful flowers (the source, it turns out, of most of Hawaii's leis). The 10,023-foot Haleakala volcano loomed ahead, and the Pacific glittered in our rearview.

At Kekaulike Avenue, we veered off the highway and headed for Ali`i Kula Lavender farm (1100 Waipoli Rd., Kula, aliikulalavender.com), a 13.5-acre spread of purple-hued hills, with guided tours and an open-air patio where you can sit and enjoy lavender-infused everything, including scones and chocolate gelato. We strolled through 45 varieties of the plant, each with its own unique smell, but our visit was cut short by a drizzling rain that quickly morphed into a full-on monsoon.

Lisa and I sprinted to the Mustang and headed for the nearest patch of blue sky. Nine miles later, we found it at the Surfing Goat Dairy (3651 Omaopio Rd., Kula, surfinggoatdairy.com). The 42-acre ranch is anchored by a wood hut painted red and green and strung with Christmas bulbs. Expats Thomas and Eva Kafsack traded in their relatively normal lives in Germany—he was a software engineer, she a high school language teacher—to run the place, raising goats and making cheese in the middle of the Pacific. Surfboards littered the lawn, and goats played on them as if they were a custom-designed Hawaiian jungle gym. I overheard Thomas—a smiling, Jerry Garcia look-alike—scold a few goats by name.

The dairy produces more than 30 types of cheese, and Lisa and I sampled everything from a lightly salted chèvre to a sweet spreadable cheese flavored with apples, bananas, and curry. Eva accepted our compliments graciously but kept mostly to herself, a tendency I noticed in a lot of Upcountry folk: friendly, but not so much as to encourage sunburned tourists like us to stay for good. As day-trippers, we were welcome, but our rightful place was back down at the luau, far below—to which we happily returned, speeding down the hill.