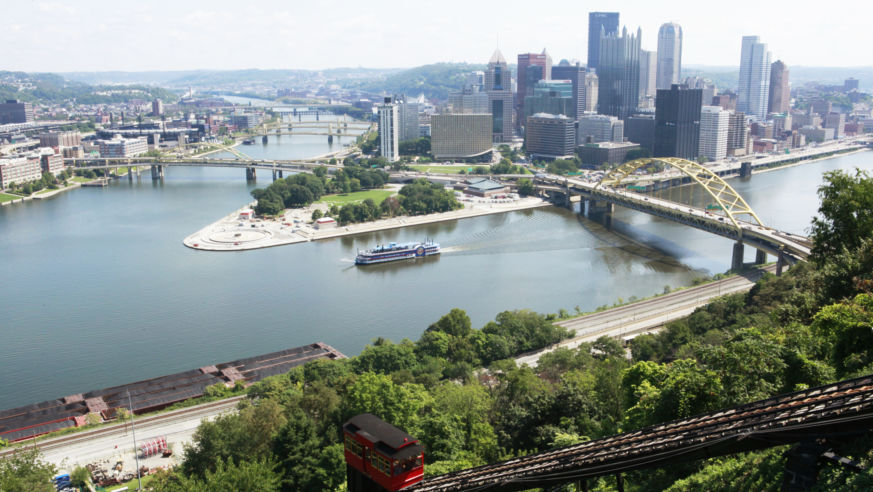 The view from the Duquesne Incline, overlooking the city of Pittsburgh.

It's time to exit the turnpike and take a closer look at northeast Ohio and Western Pennsylvania. With a rich sense of tradition and a talent for making things, whether stromboli or specialty steel, this region serves up surprise after surprise.

Let's be honest: The media has been none too kind to the Rust Belt over the years. The usual visual clichés—shuttered factories and empty storefronts—have reinforced the idea that the region is no vacation destination.

That's old news. To bypass the stretch of the Rust Belt between Cleveland and Pittsburgh is to miss out on the pleasures of heritage and history and the excitement of an evolution in progress.

I have experienced both the tradition and the transformation of this area firsthand. After living elsewhere in the U.S. for more than a decade, I moved back to Northeast Ohio, hoping to reconnect with what I knew and loved about the region and discover what else is in the works. What better way to become reacquainted with my Rust Belt roots than to hit the road with a new perspective and an old friend—my sister.

We started our trip from my home in the suburbs of Cleveland—a city that deserves far more than a one-day drop-in. A major player in the history of manufacturing in Ohio and a community deeply invested in revival, Cleveland has enough music and cultural attractions, groundbreaking dining spots, and reasonably priced entertainment to justify a much longer getaway.

When visiting the North Coast—named as such for Lake Erie, Cleveland’s northern border—for any length of time, do not miss the West Side Market in the Ohio City neighborhood (1979 W. 25th St., crepes from $5). In 2012, the market celebrated its 100th anniversary, and one stroll through the indoor bazaar of fresh meats, pastries, cheese, and produce on a Saturday morning will show you why it has thrived for more than a century.

We hit the road on Interstate 80, the Ohio Turnpike. For all the times I had traveled east on the turnpike, never had I stopped at Cuyahoga Valley National Park—a 33,000-acre preservation framing the Cuyahoga River (1550 Boston Mills Rd., Peninsula). The rolling crests of the valley and rich forest had always been a pleasant sight from the highway, but to actually experience the park is to know that it really is a national treasure. We made the easy hike to Brandywine Falls then enjoyed the cliffs and birches of the Ledges Trail. Just an hour east of the park is the city of Youngstown, a place full of rich traditions and cultural assets. The Butler Institute of American Artis a marvel that boasts more than 10,000 works from the colonial era to the modern and contemporary periods, including paintings by big-name artists like Edward Hopper, Winslow Homer, Chuck Close, and Georgia O’Keeffe (524 Wick Ave, free). For a different aesthetic, jump across the street to the McDonough Museum of Art, which features primarily contemporary works (525 Wick Ave). The sleek Modernist facility provides a satisfying contrast to the classically designed Butler.

A visitor will not go hungry in Youngstown unless she works at it. Diligently. Just two blocks from the art museums is Cassese's MVR, a restaurant that began in 1927 as a pool room and was granted the second liquor license in the city at Prohibition's end (410 N. Walnut St.). Since 1938, the Cassese family has served Italian American favorites named for relatives, friends, and the chefs who have made the food something to keep coming back for. The sauce is still homemade, as is most of the menu. We enjoyed a meal on the back patio, where we took in the sights and sounds of bocce on three gravel courts. We were so engrossed in the games that we almost passed up the pizza. For the crust alone, we're lucky that we didn't.

Among all that was familiar in Youngstown, we stumbled upon something new to us: Rust Belt Brewing Company, a craft brewery that makes its beers in the old B&O train station along the Mahoning River and serves them in its downtown Tap House (beers from $4.50, 112 W. Commerce St.). The flight of brews we sampled ranged from the dark-roasted Coke Oven Stout to the deliciously floral Peacemaker Imperial IPA. Jillian Blair, brewery manager, explained the brewery's interest in celebrating the city's industrial identity while refining a familiar concept. "We want to brew a good beer that everyone can enjoy," Blair said. "We think of it as giving back to and honoring the American worker." In the summer months, stopping by one of Youngstown's many Italian heritage festivals is a must. Events like the Brier Hill Italian Fest made eating trailer-prepared cavatelli, spicy sausage sandwiches, and apple dumplings cool long before the food-truck trend (Victoria and Calvin streets).

Before leaving, we took in two glimpses of Youngstown from Fellows Riverside Gardens (123 McKinley Ave). On one end of the bloom-laden garden is a panorama of downtown; the other overlooks Lake Glacier and the northern edge of 2,330-acre Mill Creek Park. The central stretch of rolling, well-tended lawn invites leisurely strolls with plenty of pauses to smell the award-winning roses.

Inspired by memories from childhood, we made our way down to Lake Glacierand rented pedal boats (Glacier Boathouse, West Glacier Dr.). Just a half hour of pedaling across the still, forest- framed lake and we were ready to drift and enjoy the scenery. Farther south in Mill Creek Park we visited Lanterman’s Mill, a working grist mill that has been stone-grinding wheat, buckwheat, and corn just like it did when it was first built in the mid-19th century (980 Canfield Rd.). A short drive south is Columbiana, Ohio, a small village with big rural charm. We stopped by the Shaker Woods Festival, a large gathering of craftspeople that happens for three weekends each August (44337 County Line Rd). We browsed handmade wares under a canopy of century-old trees and sampled roasted pecans, sweet kettle corn, and lemonade shakes, then stayed in the heart of the village at the Columbiana Inn, a fully renovated 1904 Beaux Arts-style B&B (rooms from $125 per night, 109 N. Main St). Its highlights include repurposed-wood decor and innkeeper Paul Bissell's world-famous hash browns—a potato masterpiece of local garlic, cheese, and sausage.

Winding through the Ohio River Valley on the way to Pittsburgh, we stopped where it all started for early colonial settlers and Rat Pack crooner Dean Martin: Steubenville, Ohio. Historic Fort Steuben is a replica of the fort built after the Revolutionary War to house and protect government surveyors ($5, 120 S. Third St). Their task: Lay out the first ranges of the Northwest Territory, the land destined to become Ohio, Indiana, Illinois, Michigan, and Wisconsin.

Like Cleveland, Pittsburgh needs much more than one day for true exploration. Two hours at the Carnegie Museums of Pittsburgh was far from enough. We marveled at the bones of Apatosauruslouisae, the dinosaur named for Andrew Carnegie’s wife, Louise, and lingered in the photo gallery—the museum was the first to exhibit photography as art. During a stop for a quick burst of fuel at La Prima Espresso Bar in the Strip District, Italian language teacher turned coffee importer Sam Patti educated us on how to do espresso in the traditional style: Start with a single, well-made shot and enjoy it while standing at the bar, preferably with good conversation and good friends (single espresso $2, 205 21st St). For dinner, we sipped alcohol-free birch beer and chose from an ever-changing selection of "untraditional" pierogies at Church Brew Works—an old church turned microbrewery (pierogie $18.50, 3525 Liberty Ave). Before heading to bed at lovely Sunnyledge Boutique Hotel and Tea Room (rooms from $139 per night, 5124 Fifth Ave), we rode the historic Duquesne Incline($2.50, 1197 W. Carson St) overlooking downtown Pittsburgh, a fitting end to our Rust Belt road trip: watching the sun set on where we'd been and looking forward to where we might go next.