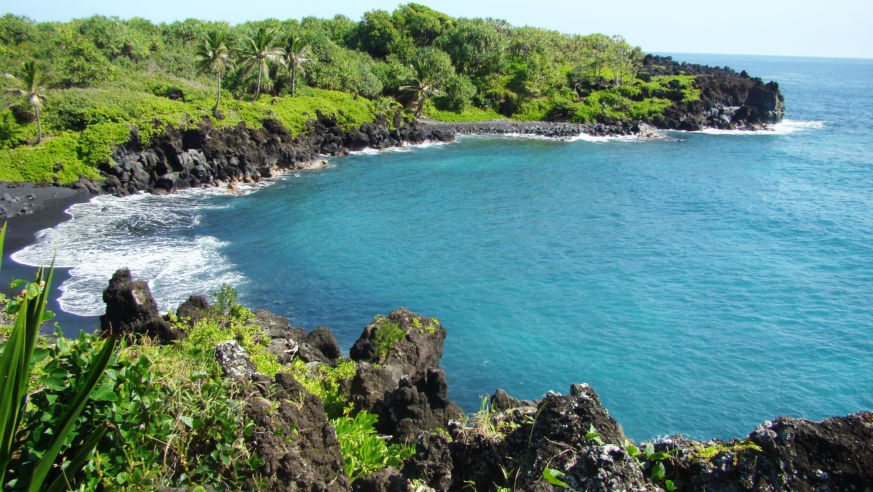 Paradise is worth the risk, which is why the 42 miles of Highway 360 to Hana in eastern Maui are such a tourist favorite.

This article was written by Greg Keraghosian and originally appeared on Yahoo Travel.

Maybe someday, Doc Brown will be right. Maybe we won’t need roads. But until we all get a flying DeLorean, we’re going to be using them in our travels, and often they’re a big part of the fun.

For some, that fun requires trying not to die when you’re driving said roads. If you just can’t feel satisfied without navigating hairpin turns, dizzying elevations, and gravel surfaces with no guardrails to protect you, we’ve got you covered with this bucket list of freaky routes.

Some of these are highly traveled destination roads, some get very little traffic, and others are obscure to most drivers. But if you can patiently and carefully handle them in the proper vehicle, you’ll be rewarded with some tasty visual treats, plus access to unique mountain-climbing and cycling adventures.

We’d tell you to buckle up, but we’re not sure how much that will help you here:

This little-used 7-mile route in and out of the park near the famous Racetrack Playa really puts the “Death” in Death Valley. It’s a faster route to the park than others, but you might be clenching your jaw the whole way trying not to fall hundreds of feet to oblivion, and it’s not for the casual driver or the casual car. This is four-wheel drive territory only.

My friend Doug did the honor of driving us out of Death Valley via Lippincott at the end of our camping trip last fall, and by the time we had slowly descended the almost-2,000-foot drop, I felt like the park had chewed us up and spat us out into Saline Valley.

What could kill you here? Let us count the ways. There are no guardrails, and there is the constant threat of a steep fall if you’re not careful—at times, there’s just a foot or two of gravelly space to navigate. You’ll be driving around or over some large rocks that could break down your vehicle, and if that doesn’t do it, the park’s intense heat could if you’re making the uphill climb into Death Valley during the hotter months. There’s no towing service, no water source, no road signs, and no cell reception. Other than that, this drive is like Christmas.

Still, competent drivers in the right vehicle can make this trip safely. Make sure you stop along the way to capture some gorgeous views of the valley below. Also, if you enter the park this way, you’re just three miles from the Racetrack and its otherworldly beauty. Just play some Metallica at full blast as we did in this video clip to give you the adrenaline rush you need to survive.

There’s nothing ironic about the name of this 38-mile journey that goes from over 15,000 feet in La Paz to 3,900 feet in Coroico—it is the black widow of roads. Its claim to fame is being named the world’s most dangerous road by the Inter-American Development Bank, and it’s estimated that 200 to 300 people traveling on it die each year.

It’s not hard to see why the road is so dangerous: It’s barely the width of one vehicle, with no guardrail to protect you from falls of up to 2,000 feet. Rain can make the road muddy and slippery, and rain or fog can reduce a driver to feeling blindfolded.

Still, there’s a siren song here that attracts thousands of people, from danger-loving tourists to hardcore cyclists. The view of the Amazonian rain forest is astounding, and standing right over the sheer drops here will bring out the lemming in many of us. Tour groups that serve the road include Barracuda Biking and Gravity Bolivia.

As dangerous roads go, this is among the most visited in the world, and for good reason: It overlooks a UNESCO World Heritage Site, the Geirangerfjord on the west coast of Norway. I’d like to say that I gave death a noogie as I raced this road’s 11 hairpin turns and 9 percent incline in an Alfa Romeo, but in fact, I slowly weaved through it on a large tour bus. Next time, I swear.

Dangerous conditions here include the incline, narrow driving space, and the poor traction and visibility that come with rain and fog. But oh man, those views: There are ideal photography opportunities where you can pull over and capture the fjords and lush valleys below, and waterfalls so close you can touch them. Note: The road closes in October and opens in May.

Paradise is worth the risk, which is why the 42 miles of Highway 360 to Hana in eastern Maui are such a tourist favorite. You’ll have to navigate through and around 600 hairpin turns, 54 one-lane bridges, steep cliff drops, falling rocks, and even some confusing mile markers that reset. Plus it rains often, so there’s that.

But the rewards for your risk are considerable: You probably won’t have time for them all, in fact. The road itself is full of pull-over-right-now photography opportunities, but venture deeper and you’ll find such rare beauties as Wai’anapanapa State Park’s black sand beach, Twin Falls, Wailua Falls, and the laid-back charm of Paia Town. Drive slow and you’ll be fine here—you’d better, in fact, because police strictly enforce the 25 mph speed limit.

Related: Life Lessons from Maui: What I Learned Driving the Crazy Road to Hana

While the Road to Hana is seductively warm and dangerous, this frosty, gravelly, pothole-laden route is as seductive as a White Walker in Game of Thrones. The Dalton Highway was opened for one thing: transporting oil. And it covers 414 miles of desolate, icy terrain.

This is the route of Ice Road Truckers fame, and you’ll have to excuse the truckers for thinking you’re crazy if you want to drive this highway for fun. Let’s put aside the freezing cold and often-miserable road conditions, with 18-wheelers pounding your vehicle with ice. On a single 240-mile stretch, there are no gas stations, restaurants, or basic services—the longest such stretch in North America. There are three—count em, three—gas stations the entire way. And don’t count on cell service at all.

Still, there are enticements to taking your chances here. You can say you’ve crossed into the Arctic Circle, which the highway does. And if you visit at the right time, you can slowly pull over and watch the northern lights.

A guide is highly recommended here unless you know your survival skills, as you’ll need to pack provisions, including gas. And be on the lookout for freeway closures, such as the one that happened just after flooding from the Sagavanirktok River.

Related: An Alaskan Adventure—Ice Road Trucking Under the Northern Lights

For some real altitude, take your chances with this 800-mile drive. At 15,397 feet, it’s the highest paved international road in the world. And you can get a sense of how dangerous it is just by knowing that about 1,000 workers died building this freeway before it opened in 1979.

The road’s nickname stems from the collaboration between China and Pakistan in building it, but it can be unfriendly in practice, with little driving room, sheer drops, no pavement on the Pakistani side, and flash floods.

However, Karakorum is an adventure lover’s delight. Comprising part of the old Silk Road trade route, it offers views of soaring mountain peaks such as the K2 (second-highest mountain in the world), massive glaciers such as the Baltoro, and sprawling rivers such as the Indus.

Welcome to a road so dangerous, your rental car insurance won’t be honored if you drive on it—only one other road in New Zealand has that honor.

Yet you will be tempted to drive this one-lane, twisting terror with steep drops because it abounds with natural beauty and photo ops, including the Shotover River directly below you. Skippers Canyon Road is cut into the side of a mountain and extends 16.5 miles in New Zealand’s South Island, 25 miles from Queenstown. It’s considered one of the country’s most scenic routes. The miners who built the road in the late 1800s didn’t think much about luxury, though—it’s unpaved and very narrow. Should you encounter a car driving the other way, one of you will have to back up gingerly until you can find enough room to pass. Good luck figuring out which of you that will be.

For an adventure trip, you can hire a tour bus to do the driving for you, such as a jet boating tour with Skippers Canyon Jet.

Is climbing the world’s ninth-highest mountain not challenging enough for you? Fine. Just try driving to the base of it. If you want to climb Nanga Parbat, you’ll have to ascend six death-defying miles to Fairy Meadows. The gravel road is completely unmaintained, there are no guardrails to protect you, and it gets so narrow that near the end you’ll have to cover the last section by walking or biking. The road is prone to avalanches and heavy snowfall, and it closes in the winter.

If you impressed yourself by driving down the curves of Lombard Street in San Francisco, this is just like that, only 1,000 times more challenging. Called the “Snails Pass” by locals, this serpentine mountain pass in the Andes connects Santiago, Chile, to Mendoza, Argentina. It reaches 10,499 feet in elevation, and this being in the Andes, it’s known for getting heavy snowfall: About 15,000 travelers were stranded for 10 hours on the Argentine side in 2013, when the road had to be closed because of snow and cold.

When you reach the summit of this road, you’ll pass through the Cristo Redentor tunnel, and the heaviest, steepest switchbacks are on the Chilean side. You may need tire chains and plenty of patience to make it through here, but if you take your time, you should be able to avoid an accident.

We’re saving our most obscure road for last, though it’s arguably more dangerous than any other on this list. The D915 connects the Turkish cities of Bayburt and Of, near the Black Sea, and it spans 66 miles. It has many of the same hazards of the Death Road in Bolivia: It’s only a lane wide in some sections and unpaved, with elevation exceeding 6,500 feet and no guardrails protecting you from certain death. The often-poor weather adds to the danger.

Says the website Dangerousroads.org, “Words can’t describe the road and pictures don’t do it justice… the steep part is simply terrible. Curvy roads descending down the cliffs, often so narrow that you cannot turn the first time.”