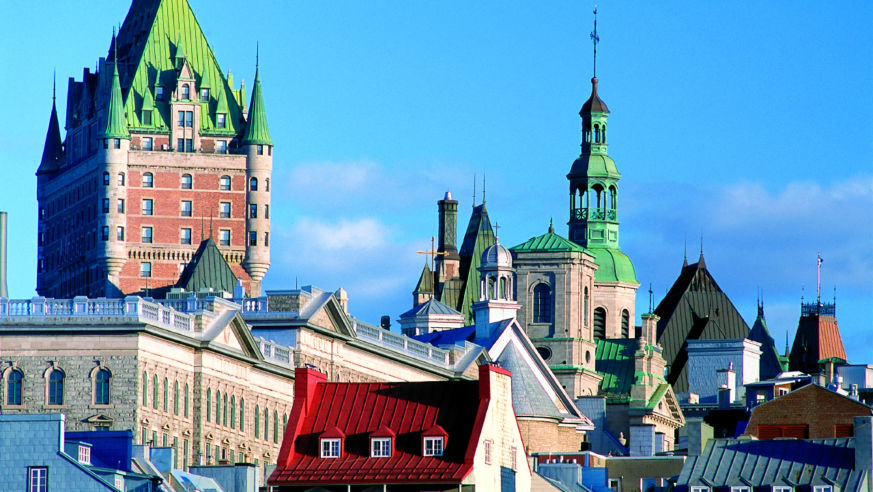 You may fall so hard for the charms and quirks of Quebec City that you'll find yourself mistaking the St. Lawrence River for the Seine.

I’m walking the streets of Quebec City with a red feather clipped into my hair, a fluffy layer of petticoat-like cushions, a large (and surprisingly heavy) red and gold skirt layered over them, and a rather snug matching long-sleeved corset top to bring the outfit together. My father, John Conforti, who accompanied me on this weekend getaway, is smiling ear to ear, dressed as a dashing French nobleman, hamming it up for the camera. He declares that he’s never felt more like a musketeer in his life.

There’s something special about a place that throws a five-day bash to celebrate its heritage by donning period costumes and partying like it’s 1699. Quebec City’s New France Festival, held each summer, commemorates the anniversary of the 1665 siege of Quebec, in which 500 French Canadians defended the city against the British army. I quickly discover that the people here are warm and welcoming, speaking French or English depending on your reaction to their friendly, “Bonjour, hello!” At times it feels like I’m strolling along a pretty Parisian promenade, but have to remind myself that it’s the St. Lawrence River I’m fawning over, not the Seine.

Of course, the biggest perks here are the prices—everything’s a bargain thanks to the strong dollar—and the fact that I’ve flown only 90 minutes from New York City to get here. Here’s why you should visit, too.

PICK A FESTIVAL, ANY FESTIVAL

Quebec City may be best known for the world’s largest Winter Carnival. It’s returning January 29 to February 14, 2016, and you’ll find everything from snow sculptures to ice skating and tons of winter wonderland fun for the whole family (the official Carnaval Effigy pin is your entry to all festival events and activities, about $11). Visit during the summer to see Macy’s-level fireworks shows every Wednesday and Saturday night, or in early August for the New France Festival, mentioned above. Get in on the fun by making your own costume or renting one at Costumier Lépoque from $60 to $160 each, depending on how intricate you want your outfit to be). An $8 festival medallion gives you access to all festival venues and activities. If music festivals are more your style, check out the Quebec City Summer Festival, an 11-day event featuring 300 shows on 10 stages. The Rolling Stones, Foo Fighters, and Keith Urban all headlined this year (tickets from about $74 for the 11-day festival).

STAY IN THE CENTER OF ALL THE ACTION—FOR LESS

Charming Hôtel Château Laurier Québec is a 10-minute walk from the heart of Quebec City’s Old Town—you’ll know you’re there when you reach the impressive-looking ramparts (from about $129 per night). The hub of the city’s nightlife is around the corner along Grand Allée, with an artsy vibe and food scene happening on nearby Cartier Street. For a non-traditional traditional stay, try Le Monastère des Augustines, once a cloistered monastery for the Augustinian Sisters, now a newly renovated hotel in the center of the Old City (breakfast and access to the museum and heritage site included, historical-style single rooms from $95 per night, traditional-style double rooms from about $110 per night, and contemporary double rooms from about $141 per night). Hilton Quebec is also lo- cated just outside the ramparts and offers rooms overlooking the scenic city below (from about $135 per night).

GET AROUND TOWN BY BUS—OR SEE THE SIGHTS FROM THE ST. LAWRENCE RIVER

It’s wonderful to just spend time wandering the colorful streets of Quebec City, taking in views of the St. Lawrence River from the historic Promenade Samuel-De Champlain. For a different point of view, take a ride up and down the Funicularbetween Upper Town and Lower Town (about $2 per person). If you’re short on time, opt for a hop-on-hop-off city tour from Old Quebec Tours to see the sights (about $27), or better yet, take in the city from the water with a 90-minute cruise down the St. Lawrence River, operated by family-owed company Croisières AML (from about $26).

No car? No problem! Old Quebec Tours offers half-day guided trips from Quebec City. You’ll visit the Sainte-Anne-de-Beaupré Shrine—a stunning neo-Roman basilica known for being the oldest pilgrimage site in North America—Montmorency Falls, an impressive waterfall 1.5 times higher than Niagara Falls, and Île d’Orléans, home to quaint country villages (about $38). If you decide to rent a car to better explore the region, don’t miss a trip to Canyon Sainte-Anne, a gorgeous waterfall complex surrounded by family-friendly hiking trails (about $10, open seasonally between May and October). Art lovers should stop by the Albert Gilles Copper Art Museum for a look at 50 beautifully embossed panels that depict the life of Christ, a masterpiece that took artist Albert Gilles more than 15 years to create (free). On your way back into town, treat yourself to lunch at La Monnaguette restaurant, part of Cassis Monna & Filles, on Île d’Orléans, where you can taste delicious, locally made black currant wines and other farm-to-table specialties (entrées from $10).

EAT WHAT THE LOCALS EAT

Don’t forget to try every Québécois’ favorite dish, poutine, an intriguing yet deliciously filling combination of French fries, brown gravy, and cheese curds—several locals told me the best poutine in town can be found at Chez Ashton, a popular chain restaurant offering heaping plates of piping-hot poutine (from $7).

THE BEST PART: IT’S CLOSER THAN YOU THINK

Yes, you will need a valid passport if you’re traveling from the U.S., but great news: Quebec City is super-accessible thanks to planes, trains (VIA Rail Canada, anyone?), and automobiles—catch a nonstop flight from many cities within the U.S. and Canada via Delta, United, WestJet, Air Canada, and Porter Airlines (round-trip flights from $323 in mid-December on Porter Airlines from Newark to Quebec City with a stopover in Toronto). Feeling adventurous? Make it a French-Canadian road trip from Montreal to Quebec City (roughly a 2.5-hour drive), and continue another hour north to Le Massif de Charlevoix for a Canadian skiing adventure you’ll never forget (half-day lift tickets about $44).