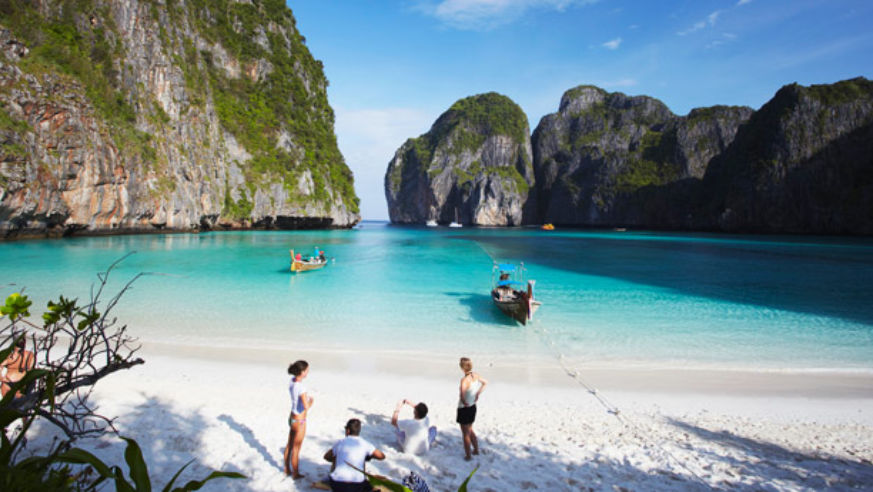 10 landmark films, 10 ridiculously beautiful beaches. We found Hollywood's most vaunted locations&mdash;and are giving you the keys to get there.

Phi Phi Leh, Thailand—The Beach (2000)
The flick: The movie that gave voice to a generation of backpackers, The Beach, based on Alex Garland's novel of the same name, centers on the quest for the Thailand's last pure beach, one untainted by tourism. The scene: Leonardo DiCaprio swims beneath a seemingly impenetrable wall of cliffs, only to surface in an impossibly idyllic cove.

The beach: Located on Phi Phi Leh island in the Andaman Sea, Maya Bay was digitally enhanced for the movie: The directors added a fourth side to make it seem even more private. But that doesn't mean the bay is any less spectacular in real life. Karst limestone cliffs tumble to a slash of sugary white sand. Shallow waters and a ribbon of coral make for some incredible snorkeling. Even to this day, there are no rental bungalows, but you are allowed to make like DiCaprio and camp overnight.

Getting there: Visit on a daytrip from the southwestern Thai resort towns of Phuket and Krabi, via a mix of ferry and longtail boat rides.

Petit Tabac, St. Vincent and the Grenadines—Pirates of the Caribbean: The Curse of the Black Pearl (2003)
The flick: With number four in the works, the films chronicling theadventures of Captain Jack Sparrow have brought moviegoers to a number of tropical hideaways, but few can top the deserted beach in The Curse of the Black Pearl. The scene: When villains dump Johnny Depp and Keira Knightley on a strip of bone-white sand to wither, Knightley uses a stash of rum to create a rescue bonfire, only to have the ever-hedonic Depp moan, "Why is the rum gone?"

The beach: Part of the Tobago Cays Marine Park in St. Vincent and the Grenadines, Petit Tabac is one 1) completely uninhabited and 2) highly protected. What that translates to is a perfect Caribbean island with no glitzy palazzos on the beach, no jet skis or fishing boats rumbling over the reefs, and an overwhelming sense that you've reached world's end (no, wait, that's the other movie!).

Getting there: Petit Tabac is an easy day trip from St. Vincent's Union Island, from where you can hop a boat ride on the Scaramouche, a schooner that played the part of a merchant ship in the The Curse of the Black Pearl.

Kastani Beach, Skopelos Island, Greece—Mamma Mia! (2008)
The flick: This silver screen version of the Abba-infused, chart-busting musical, Mamma Mia!, shines a spotlight on Sophie (Amanda Seyfried), who wants to find out who her real father is before she gets married. The scene: Tanya (Christine Baranski) gives a sultry rendition of Abba's "Does Your Mother Know" on a small, sandy beach with a makeshift bar, framed by a cerulean-colored sea.

The beach: Best known for the dramatic monolith, Kastani, on the western coast of Skopelos, is not your traditional swimming beach. The shore is rocky (though there is a sandy beach), so, good for a picnic. Many visitors also choose to hike to the precariously perched hilltop monastery of Agios Ioannis sto Kastri. Mamma Mia's climactic wedding scene took place here, but more to the point, the church offers a dazzling view over the island.

Getting there: Skopelos is easily reachable by daily ferries or hydrofoils from the resort towns of Volos or Skiathos (both under a 2.5-hour bus ride from Athens) . The trip is about 6.5 hours when traveling via Volos and 5 hours via Skiathos.

• Related:Upload your beautiful beach photos to myBTand they may be featured!

Lumahai Beach, Kauai, Hawaii—South Pacific (1958)
The flick: After winning a Pulitzer and multiple Tonys on Broadway, South Pacific hit Hollywood in 1958, and became an immediate hit. Though James Michener set the story in Vanuatu (where he was stationed in World War II), most of the movie was shot on Kauai. The scene: Mitzi Gaynor prances around the broad, blond swath of Lumahai Beach, as she washes that man right out of her hair.

The beach: Set on Kauai's northern coast, Lumahai is hemmed by ironwood trees at one end and steep, fluted mountains at the other. The beach is popular with surfers, but the currents can be treacherous for swimmers and there's no lifeguard (some locals even call it "Luma-die"). Swim at your own risk. That, or just kick back, relax, and watch the waves roll in. For $93.50, Ali'I Movie Excursion and Scenic Hanalei (haiwaiitours.com) leads seven-hour trips to film locations from South Pacific and other movies shot on Kauai, such as Raiders of the Lost Ark.

Getting there: Drive north out of Lihue about 35 miles north on Highway 56 to the western edge of Hanalei Bay.

Cape St. Francis, South Africa—The Endless Summer (1966)
The flick: The surf doc after which all others were modeled, this film traces the worldwide quest of Robert August and Mike Hynson to find the perfect wave. The scene: The pair lands in South Africa, crest a dune on Cape St. Francis, and find exactly what they have been looking for, a perfectly-cresting righthand break.

The beach: While neighboring Jeffrey's Bay has become Surf Central (with the accompanying tourist tchotchkes), Cape St. Francis has gone upscale, with the expansion of shops and townhouses. The famed break—called Bruce's Beauties—sits about a mile up the coast from the Cape, near St. Francis Bay.

Getting there: The perfect ride does not come so easily. The flight between Johannesburg and Port Elizabeth in the southeast is about 90 minutes and Cape St. Francis is a 90-minute drive to the south from there along N2 road and R330. The best time to visit is May to September, when swells have been known to reach 10 feet and rides can last up to 30 seconds.

Devil's Beach, Nanuya Levu Island (Turtle Island), Fiji—The Blue Lagoon (1980)
The flick: The movie that brought Brooke Shields, then 15, into the limelight, The Blue Lagoon tells the story of cousins falling in love after being shipwrecked on a deserted island. Its success won Shields' a Time cover as "The80s Look." The scene: Shields's character, her cousin (Christopher Atkins), and a galley cook beach their emergency craft in a wide but well-protected lagoon.

The beach: Set on the 500-acre island, Devil's Beach is just as idyllic as when it was filmed more than 20 years ago—all palm trees and shallow coral reefs—but it's got a few more services. Many guests choose to rent a sailboat or kayak and float to within feet of the coral reefs, all the easier for snorkeling.

Getting there: The island is now a private resort, so guests transfer from Nadi International Airport for a 30-minute flight here. One particular: During filming, clocks on Nanuya Levu were set an hour ahead of Fiji's standard time to max out peak sunlight, and the island has kept that habit since.

Leo Carrillo Beach, Malibu, California—The KarateKid (1984)
The flick: With a remake out last year, The Karate Kid proves again that its coming of age formula is as powerful as ever—to date, the remake has grossed $360 million at the box office. The scene: In the original movie when master Pat Morita and his protégé Ralph Macchio practice the fictional "crane" move (one leg lifted, both arms up) with the Pacific glittering behind them.

The beach: 28 miles northwest of Santa Monica, this Malibu-area state park may be Hollywood's favorite stretch of sand for shooting minor beach scenes, appearing in such films as Inception, The Usual Suspects, Point Break, and Beach Blanket Bingo. Framed by sycamore trees and steep headlands, the 1.5-mile-long coastline is a favorite with surfers, swimmers, and picnickers up from Los Angeles.

Getting there: Find the beach by driving north on the Pacific Coast Highway and stopping just short of its intersection with Mulholland Drive.

Halona Cove, near Waikiki, Hawaii—From Here to Eternity (1953)
The flick: The winner of eight Academy Awards, From Here to Eternity made waves for its nuanced portrayal of military service in pre-Pearl Harbor Hawaii and was a spotlight on some of the prettiest locations on Oahu. The scene: Star-crossed lovers Burt Lancaster and Deborah Kerr passionately rendezvous, canoodling in the surf.

The beach: Filming took place at tiny, cliff-flanked Halona Cove, just around the corner from Hanauma Bay. The sheer lava rock walls fall directly into the ocean. Swim with caution. Unlike many of Hawaii's better known beaches, this one doesn't have a lifeguard.

Getting there: From Waikiki Beach, drive east on the H1 (which turns into Hwy 72) about 40 minutes to Koko Head Regional Park. Drive to the parking lot for Halona Blowhole, where water often surges through an underwater tunnel into an upward spout, then walk to the south side of the lot and follow the faint path down to the beach.

One&Only Ocean Club, Paradise Island, Bahamas—Casino Royale (2006)
The flick: After a long bout of anemia, the James Bond franchise received a jolt in 2006 when actor Daniel Craig took over the superspy's role to foil Le Chiffre, a financier of international terrorists. The scene: 007 intercepts the lover (Caterina Murino) of one of Le Chiffre's henchman after one of her horseback rides on the beach.

The beach: If the One&Only Ocean Club on the Bahamas' Paradise Island is a little overly exclusive—Michael Jordan, Martha Stewart, and others have stayed there—most of the island's 3.6-mile-long, white-sand beach is open to the public.

Getting there: Roughly a 15-minute drive north of central Nassau, but it feels a world away.

Indian Beach, Ecola State Park, Ore.—Twilight (2008)
The flick: The movie that started a movement—teen angst meets good old-fashioned vampire blood lust—Stephenie Meyer's Twilight series is set in the appropriately cloudy Washington state but some of the best beach scenes in the film are shot 200 miles south in Oregon. The scene: Taylor Lautner starts to reveal to the truth about vampire Robert Pattinson to the perpetually conflicted Kristen Stewart on a dramatic grey sand beach.

The beach: With average highs in August of a mere 69 degrees, Indian Beach makes for a pretty brisk swim. But what it lacks in weather is made up for in scenery, with a backdrop of sea stacks, headlands, and spruce forest. The area has also served as a setforGooniesand Point Break. And the beach's tide pools, filled with anemones, sea stars, and crabs will keep children occupied for hours.

Getting there: Heading west from Portland, follow US-26 until you reach US-101. Ecola State Park is off the road about 80 miles from the city.