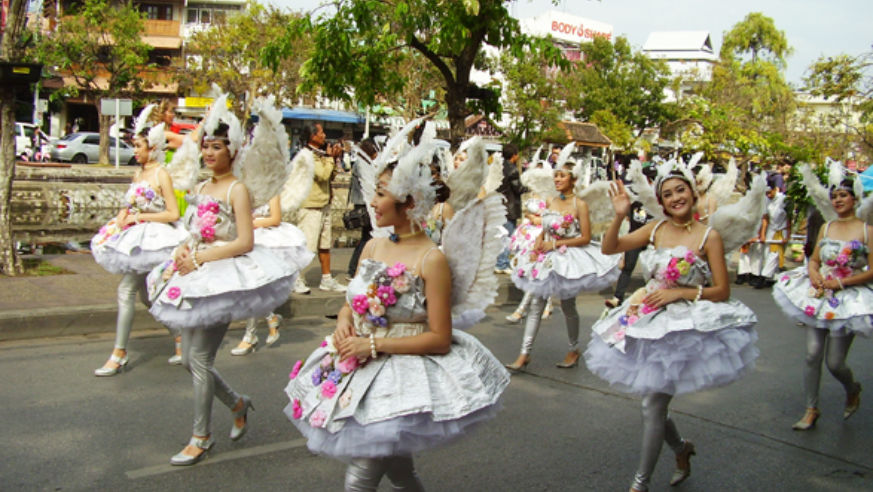 In the hills of northern Thailand, lush jungle, farms, and fruit trees rolled past the train window. As we neared Chiang Mai a fellow passenger cautioned me that the Flower Festival would fill every room in town. I hadn't made a reservation. It was a chore, but eventually I found a room. My hotel was pricey, but right on Kotchasarin Road, on the eastern side of the Moat Road that encloses the old city, a 700-year-old defensive rampart and canal built against the encroaching Burmese.

Chiang Mai, the center of the Lanna Kingdom, was founded more than 800 years ago—the Lanna fell to the Burmese in 1558 but the dynasty and culture remained strong. Ties to Bangkok weakened the Burmese hold and the Lanna eventually merged with the Thai Kingdom.

Thailand's fifth largest city is also called The Rose of the North. Chiang Mai proper has almost 200,000 people, while more than a million people live in the surrounding area. It is the gateway to the hill country and a major launching point for jungle trekking, elephant riding, white water rafting, and visits to the neighboring hill tribe villages.

The economy of the area has always relied on agriculture. The temperate tropical climate is especially conducive to flowering blossoms. For centuries the people of Chiang Mai celebrated the fertile cycle of life and the arrival of the growing season with floral tributes to Buddha and offerings to Vishnu, Shiva, Genesh, and other Hindu deities. These are the ancient origins of the annual Flower Festival, which since 1976 has been staged on the first weekend of February.

Serendipitously my hotel was located along the parade route. The day-long affair featured floats presented by businesses, schools and organizations in the district. The floats were elaborately and beautifully constructed, like giant moving sculptures made of yellow and white chrysanthemums, lilies, pink, white, and red orchids, and a rainbow of roses. Some depicted elephants, dragons, lions, and other creatures; others were floral architectural re-creations of temples and palaces. There was even a giant floral Buddha. The floats were a visual and an olfactory feast, as millions of blooms projected their aromatic essence along the parade route. Some carried contestants in the Flower Festival beauty pageant. Lovely potential Flower Queens smiled demurely, bowing and waving to the crowd. There were exotically garbed processions of men, women, and children from different hill tribes, like the Akha women glistening with silver from the top of their square hats down to their colourful beaded leggings. Marching bands in satin uniforms paraded with practiced discipline. Musician ranged from young school children, to high school kids and adults. The variety of music included classical symphonies; movie theme songs from Star Wars; and an orchestral version of the pop song Gangnam Style.

The happiness was contagious. I watched from my hotel patio, but after a pretty girl in a silk gown handed me a rose, I joined the parade, dancing alongside a group of flower bedecked ladies while snapping pictures of their float, a massive sailing ship composed of orchids. I invested 60 baht ($2) with a smiling vendeuse for a bamboo parcel of sparrows to release for good luck, and shared in their joy at being free.

The floats and the marching bands were at their best when they filed past the judge's stand near the Governor's house where officials declared the winners. The parade ended at the moat-side Suan Buak Haad garden park where the winning floats were put on display with their ribbons and trophies. Also displayed were prize floral specimens from local horticulturalists. There were food stalls and vendors offering botanical advice, flower seeds, and gardening tools.

The flower festival is the pride of Chiang Mai, signaling the end of the cool season, the start of the growing cycle, and the peak of blossoming. For me it signalled the beginning of a great visit to the lush and sensual northern hills of Thailand.

Born in The Hague, Andrew Kolasinski arrived in Canada as a small child riding in the luggage rack of a DC-7. Since then he has felt at home anywhere. As the publisher and editor of Island Angler, Andrew spends half the year fishing for salmon and trout, and in the off-season he travels the world looking for a story. He wrote this article for Tucan Travel, specialists in tours to Thailand and all over Southeast Asia.