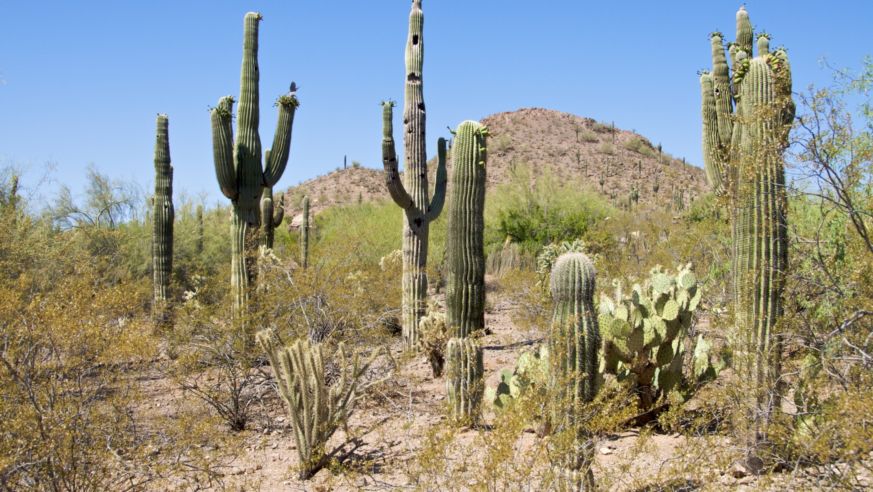 This article was written by Jason Stokes, an artist, adventurer, and travel writer who can be found ranting to no one in particular on Twitter: @JSGestalt.

It's hot in Phoenix. While this may not come as a surprise to most, what may be shocking is the sheer multitudes of people who are moving to the capital city year after year. In the summertime, temperatures in the Phoenix area have been recorded at well over 100 degrees, even reaching 120 during the 'peak months.' Yet despite this fact AZCentral.com reports that the city welcomed 40,000 new residents in 2012. According to the U.S. Census Bureau, the city stands poised to overtake Philadelphia as the fifth most populous city in the country.

So what is it about Arizona? What is this magical pull from the 'Valley of the Sun' that has new residents from across the country picking up stakes and moving to the desert? Determined to understand the mass exodus that had so many of my colleagues flocking to the desert wilderness of Arizona, I packed my bags and headed out west to follow them.

The first thing I discovered cruising at ten thousand feet over the sprawling landscape below is the sheer enormity of this city. As a habitual traveler, you discover that most metropolises look compact from the air, a core commercial district surrounded by rings of suburban real estate. Usually this view will easily fit in the tiny space provided by a standard airplane window. To my surprise, in the valley between the Camelback and Superstition Mountain ranges resided a landscape that refused to be contained. I found myself pressed against the glass trying unsuccessfully to locate the edges of an impossibly expansive development. I've been to Dallas, and those who say everything is bigger in Texas should come to Phoenix.

As I soon discover, the reasons for living out here in the 'untamed west' are as varied as the people who move here. Anna, a former east coast native like myself, meets me at the airport and we're soon driving off into the city surrounded by the most surreal landscape imaginable. I feel as if I'm in an old time movie with painted landscapes providing the backdrop to otherwise mundane activities. Mile markers tick by on the highway with gorgeous purple and red mountain peaks glowing in the setting sun on every horizon.

"I am beginning to understand", I remark as we make our exit. "Just wait," she says. "I haven't shown you anything yet." She assures me I am going to love my visit and it will be something I will never forget. Anna is a rock climber. She fell in love the west during one of her family's cross country journeys as a child and made the move out here a little over six years ago. "It feels like home. It's not the lush green mountains of the Blue Ridge parkway, but that's the point." This is a place like no other in the world. Where the scenery itself is both captivating and at times seems magical. An admitted romantic, I wonder what else this city has in store for the more practical minded explorer.

My first day we drive outside the city at sunset to South Mountain. An hour away from city center, this secluded overlook provides a full view of millions of twinkling lights. I take five pictures and fail to capture the entire skyline. We are looking down on the cities of Phoenix, Mesa, Scottsdale, Glendale, and Tempe. More than four million people reside below and more just beyond the peaks behind us. The scenery is only the beginning of the Phoenix area experience.

Over the following weeks, we attend concerts at intimate venues like the Musical Instrument Museum (It could take a few days to experience the entire collection), take hiking expeditions in Sedona Valley and spend Sunday afternoons at University of Phoenix Stadium. Evenings at local restaurants like The Angel's Trumpetand The Cornish Pasties Company reveal that commercialism isn't as rampant here as I'm used to in bigger cities like Philadelphia and Miami. There are still McDonald's on every corner and more Starbucks than you can shake a stick at (seriously how many can there really be?), but local businesses with unique concepts and local charm make me reminiscent of smaller towns like Asheville or Raleigh.

While it's very hot in the daytime, I am assured I've arrived at the perfect time. Over the next couple of weeks temperatures drop from an oppressive 110 degrees down to the mid-eighties. By October, the afternoons are pleasant, like a warm spring afternoon anywhere else in the world and nights have just a tinge of chill in the air, dropping down to the low-to-mid 60s. It's so comfortable outside you begin looking for excuses to get outdoors. These are the nights perfect for drinking on the patio and taking walks through the park. The best part? It stays like this all winter long. This is as cold as it will ever get. Two hours north of here, in Flagstaff, it's snowing!

Where most residential areas would have green manicured front lawns, there is plenty of sand. But it works here somehow. There are palm trees and everything thing else you'd expect in a dry, arid environment. Homes are decorated with colorful desert flowers, palms, and cacti. It's interesting to note that this is the only place in the U.S. that grows the iconic Saguaro cactus portrayed as so abundant that they appear in almost every single old west movie ever made. In reality they grow in huge groves along I-8 west and I-10 south in the Sonoran desert and virtually nowhere else. Some stray plants may be seen in Southern California, but this is considered rare.

The city itself covers so much ground that virtually every desire can be satisfied here. Nature lovers come for the massive red rock enclaves that surround the valley. Spiritualists like Stephanie, a massage therapist I met a few weeks back at the Grand Canyon (also in Arizona), stays here for the mysticism she experiences with other like-minded individuals she has found out here. She explains that spiritualists believe there are focal points of energy throughout the desert where they can commune with nature more freely than other places. It doesn't stop there though. Let's not forget that ASU, a nationally accredited research institute has an annual enrollment of over 72,000 students between its Tempe and surrounding campuses.

Phoenix is a young city. It is a place where young people live, work and play. With reasonable rent, $825 on average, clean air, and abundant activities, this one of the greatest places in the nation for 20-somethings (No. 9 according to Greatist.com). Nightlife here is very active, especially downtown near the city center and Mill Avenue. in nearby Tempe, which resembles Mardi Gras on a good night. The population may be getting younger too. Almost 30% of the city's population is under 18 years of age. 17% are between 24 and 34 years old.

The longer I stay here, the more I discover what is amazing about Phoenix with very little in the way of negative.There is an almost never-ending list of things to discover and I feel safer here than in most big cities. There is an attitude of perseverance that seems ingrained in the people that live in the valley. Remember Anna the rock climber? Recently sidelined (temporarily) with a diagnosis of MS, she has begun rediscovering her beloved city from new point of view, with a new attitude. "This is like nowhere else in the world." she says. I think she's right.