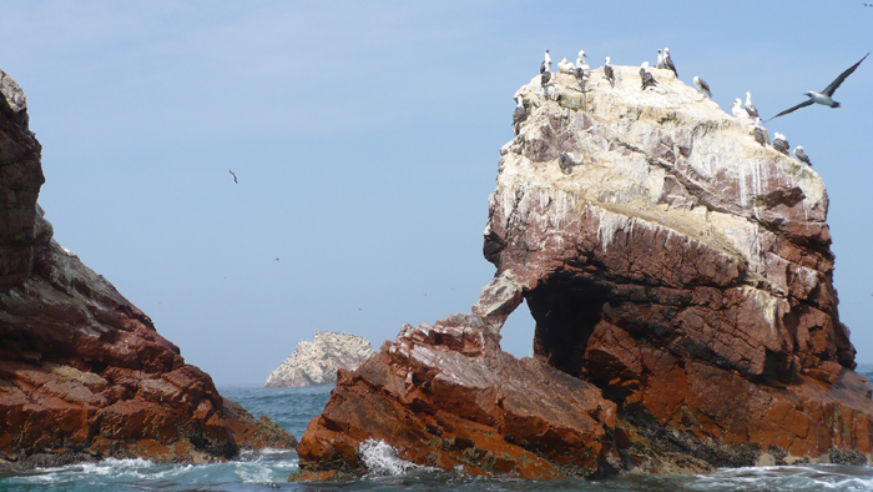 Visit the Ballestas Islands the next time you're planning a trip to Peru.

Pelicans march solemnly up and down the beaches, always on the lookout for a dead fish abandoned by a passing fisherman, while seagulls wheel overhead. This small beach town is just a few hours south of Peru's capital city of Lima, but it seems worlds away from the busy, highly populated capital that seldom sleeps. Paracas is a popular destination for national and international tourists. It's the perfect weekend getaway from Lima, an ideal place to break up a long bus journey between Lima and popular southern destinations like Cusco, Arequipa, and Puno. Paracas, in the Province of Pasco, 260 km south of the capital, is easily accessible by long-distance bus or car.

You'll find Paracas National Park and Wildlife Reserve as well as the sealife rich Ballestas Islands nearby. The Islands lie just off the coast and can be easily visited by a short boat ride from the mainland. It's easy to see why these islands are called 'the Peruvian Galápagos.'

The Ballestas Islands are home to many species of birds and marine life. Sea lions lounge on the rocky islands, flirting with the tourists who pass by on the boats, flashing their cameras, while enough species of birds to make a twitcher squeal in delight circle in the sky above. You can spot birds like the guanay guano bird, the blue-footed booby, and the tendril, among others. There are also Humboldt Penguins hanging around, as well as two varieties of seals on these rock formations which cover around 0.12 square kilometers.

A boat ride to the islands from the seaside resort of Paracas takes around two hours and sea lions will often get friendly with the tourists, coming close to the boats. The boat passes an unusual geoglyph on its way to the islands, not unlike the lines visible at nearby Nasca. The 'candelabra' is from the Paracas culture and its purpose and meaning remain a mystery. It's visible from the boat ride to the islands and is thought to have been a beacon to people out at sea, but this is just one of the theories. The sea lions' haunting cries, echoing around the islands, just add to the sense of mystery.

If you're more into adventure chasing than bird watching, there are plenty of more adrenaline-filled activities available. Enjoy sand boarding or zooming up and down steep sand dunes on a dune buggy? Nearby oasis and holiday resort Huacachina has some excellent options for both of these activities, but Paracas also has some impressive dunes to test your courage.

Not keen on the idea of getting sand in your eyes? Have a go at hang-gliding. If you're looking for a good adrenaline buzz, this is the right sport for you. Soar high above the dunes and ocean either solo (if you've had training!) or attached to an experienced glider. Another popular sport in the area is diving... And with such a bio-diverse area, you will have plenty to see!

Other guided tours include the Julio C. Tello Museum, the reserve's visitor center and, further afield, tours to nearby Pisco (where the famous Peruvian liquor, Pisco, is made), Huacachina, and Ica.

Paracas used to be a small, unassuming fishing town, but the popularity of its bio-diverse Ballestas Islands and natural reserve have made it a popular destination for people interested in Peru's history, adventure sports, and wildlife.

Staying, eating, and drinking in Paracas

Recently built hotels, restaurants, and bars line the seafront—there's something for everyone's budget. Cheaper options are, of course, further away from the sea, but it's worth paying a little extra to wake up to the view of the Pacific Ocean stretching away from you each morning. If you want to stay at one of the top-end resorts, you need to reserve your room earlier rather than later.

There is a variety of food on offer, but I'd highly recommend that you try a dish with fresh fish or seafood. Ceviche—raw fish marinated in spicy ají and lime juice, traditionally served with a raw red onion salad and a cold slice of 'yuca,' is typical in the region, as is hearty fish and seafood soup, 'Parihuela.'

Paracas is a beautiful place to visit at any time of year and if you're looking to make more of a trip of it, you can easily tag on the fascinating Nasca lines and a visit to the calm oasis resort, Huacachina. Whether as part of a bigger trip or on your own, you're sure to have a pretty special time here.

This article was written by Hannah Vickers, who has lived in Lima, Peru, for a year and a half and is the editor of Peru this Week. You can read more of her work on her blog. She wrote this article on behalf of the Tambo Blanquillo, a family-owned lodge in thePeruvian Amazon, the perfect place for encountering nature in Peru.