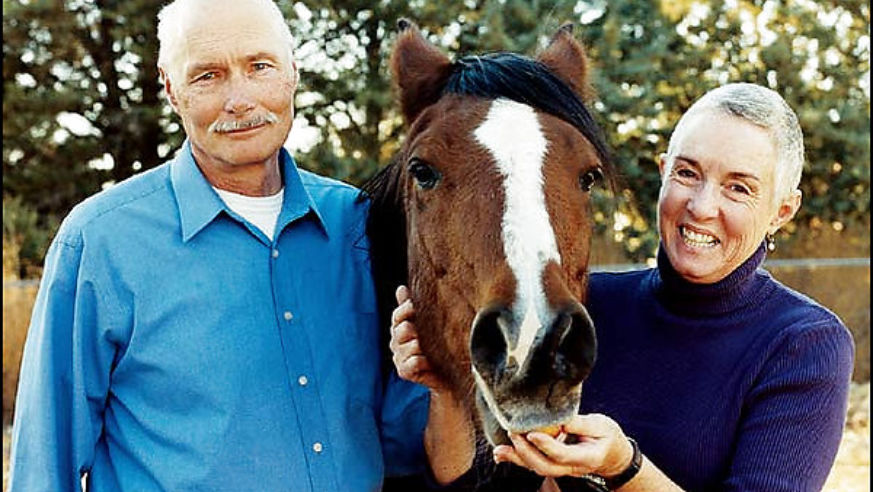 A couple from Bosque Farms, N.M., is traveling across Canada by train to celebrate their 33rd wedding anniversary.

Who's Traveling
Robert and Donna Royer of Bosque Farms, N.M., about 20 miles south of Albuquerque. Bob is a semiretired research professor of organic chemistry at the University of New Mexico School of Medicine. "He's a quiet man, on paper and in person," says Donna. She's a retired mail carrier for the postal service. "I loved it because I got to be outdoors all the time." Donna looks after Czar, the 23-year-old horse they've owned since he was foaled, as well as three cats and a vegetable garden.

Where They're Going
To celebrate their 33rd anniversary, the Royers are traveling across Canada by train. "The trip is enticing because of the scenic beauty," says Donna. Bob is (pardon the pun) totally onboard. "Trains are my favorite way to travel," he says. "You get to see more and it's very relaxing."

The Royers bought 30-day North America Rail Passes from VIA Rail Canada, which they'll use to traverse the 3,700 miles from Vancouver to Halifax (amtrak.com or via.ca, from $709). They'll make some plans in advance, but Donna doesn't want to be locked into a schedule. "A couple of years ago, we visited Utah without any particular itinerary," she says. "While I tended to overplan our trips early in our marriage, Bob has since taught me the beauty of serendipity."

How Can We Help?
The right pass: "Will 30 days give us time for four to six short stopovers?" asks Bob. "We'd like to spend a few days in each city."

Sleeping on the train: Donna has made reservations at B&Bs and hostels here and there, but she'd like more suggestions. "Do we need to book sleeper cars in advance, too?" she wonders.

Sightseeing: Aside from Montreal and Halifax, for the history and food, not much else so far has caught their eye. "Where do you recommend we stop along the route?" asks Bob.

Flexibility: "We'll want to get outside the cities," says Bob. "Will car rentals or public transportation from the train stations present a problem?"

Sticking to a budget: "We're both as tight as the bark on a tree," Donna laughs. "With your ideas, we're really hoping to have a fantastic trip without spending a fortune."

Here's Our Advice
The trains: Bob and Donna's passes allow them unlimited stops in a 30-day period. To get from Vancouver to Halifax, they'll need to take three trains: the Canadian (Vancouver-Toronto), the Corridor (Toronto-Montreal), and the Ocean (Montreal-Halifax). Passes are valid for seats in coach, which recline but don't fold flat.

The Canadian offers two classes of sleeper service: semiprivate (three sets of bunks, separated by curtains, from $200) and private (from $375). All cabins have toilets and sinks; there are shared shower rooms. Fares include meals in the dining car. On the Ocean, meals cost extra, and cabins have either a toilet and sink ($85) or a full bath with a shower ($95). The Corridor doesn't have sleeper cars because the ride from Toronto to Montreal is only five hours. To secure these prices, the Royers must reserve at least five days in advance; late bookings cost $40-$70 more.

If Bob and Donna were traveling in the summer high season, they'd have to make sleeper car reservations within 21 days of travel and pay a $50-$200 premium.

Vancouver, British Columbia: Before boarding the train, the Royers are spending a couple of days in Vancouver. It's a great city, but one of the best things about it is its location--it's surrounded by gorgeous scenery. Just 40 minutes north (SeaBus ferry to the No. 236 bus, $3 for both) is the Capilano Suspension Bridge, which hangs 230 feet above a canyon (604/985-7474, capbridge.com). If the Royers don't want to pay the $21 admission, there's Lynn Canyon Park's suspension bridge instead. It's not as impressive (166 feet high), but it's free (604/981-3103, lynncanyonparkguide.bc.ca).

Jasper, Alberta: "We'd like to see wildlife on our hikes and drives," says Bob. At Maligne Lake in Jasper National Park, snowcapped peaks tower above the brilliant aquamarine water (780/852-6176, pc.gc.ca, $8). It's a 60-minute drive south of Jasper; Hertz, Thrifty, and National rent cars at the train station starting at $35 a day. Alternatively, Maligne Tours sells five-hour excursions that include a round-trip shuttle and boat cruise (780/852-3370, malignelake.com, $57). Either way, the Royers should keep their eyes peeled for bears, deer, and elk--spring and fall are peak viewing seasons.

Winnipeg, Manitoba: Because Donna describes herself and Bob as bookish, they ought to pick up a free copy of Winnipeg's Book Walk at the city's tourism office (259 Portage Ave., 204/943-1970, destinationwinnipeg.ca). The brochure outlines a self-guided walking tour to 10 downtown bookstores, many of which sell used and rare books. Highbrow Books, for example, specializes in the humanities and sciences (310 Donald St., 204/943-5668).

Toronto, Ontario: "Chocolate is a basic food group, as far as I'm concerned," says Donna. "I have a chocolate addiction!" chimes in Bob. The Distillery District, 13 acres of Victorian warehouses converted in 2001 into a pedestrian-only mall (55 Mill St., thedistillerydistrict.com), is a 10-minute bus ride from the train station (No. 72 or No. 172, $2). Inside, the Royers will find Soma Chocolatemaker, famous for its decadent Mayan Hot Chocolate ($9), and the Mill Street Brewery, which makes a popular dark-brown porter with hints of chocolate ($2).

Montreal, Quebec: "I especially like places where you can visit most things on foot," says Bob. "We often wander around just to see interesting buildings." They'll love the oldest part of the city, Vieux-Montreal, where cobblestoned streets are lined with fantastic examples of 18th-century architecture. The area is also home to the gloriously ornate Notre-Dame Basilica, which was built in 1829 (110 rue Notre-Dame Ouest, $4).

Halifax, Nova Scotia: The Royers are history buffs, so they'll enjoy a visit to Pier 21, Canada's Ellis Island, which is behind the train station (902/425-7770, pier21.ca, $7). More than a million immigrants entered Canada here between 1928 and 1971; their stories and photos are on display in the exhibition hall. Because the couple loves seafood, a fitting way to celebrate the end of the journey is dinner at Economy Shoe Shop (1663 Argyle St., 902/423-7463, entrees from $9). Despite its odd name, "The Shoe" is one of the most popular restaurants in Halifax, with jazz on Monday nights and a menu that includes a delicious lobster and scallop vol-au-vent.