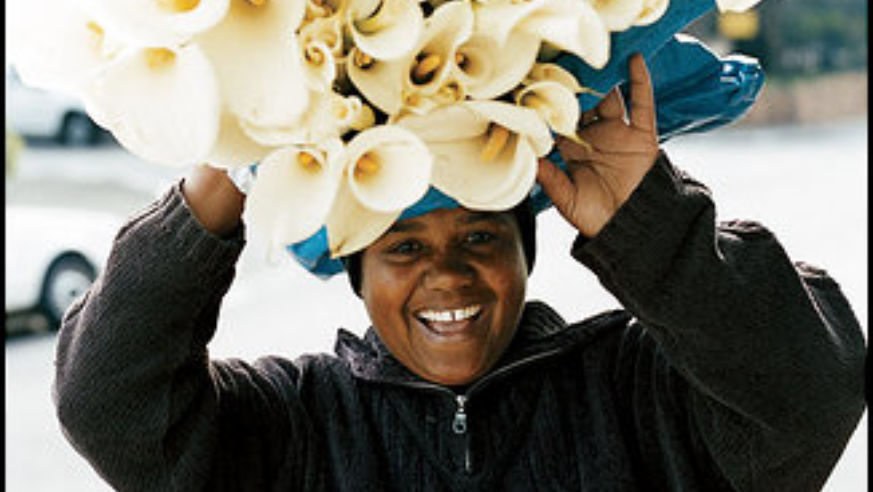 A flower seller on Long Street

How do we love the South African center of surf, sand, and style? Josh Dean counts the ways, in no particular order

1. Keys to a mansion

Cape Town is part of what's called a Floral Kingdom, a region with thousands of plant species that aren't found anywhere else. This kingdom is by far the smallest of the world's six, with more than 5,800 endemic species in a 35,000-square-mile area. The crown jewel is the king protea, an armored tulip that looks like it's been around since the dinosaurs. Most of the foliage, including the protea, comes to life in spring and summer (September through March), though at least one plant from every variety is always on display at Kirstenbosch National Botanical Garden, on the side of Table Mountain. Rhodes Dr., Newlands, 011-27/21-799-8783, nbi.ac.za/frames/kirstfram.htm, $3.50.

3. When the "tablecloth" suddenly lifts

In a region of fickle weather, there's one thing you can almost always count on: a thick pillow of clouds atop 3,560-foot-tall Table Mountain. The "tablecloth," as locals call it, often lasts for days and then disappears overnight. Keep one eye on the mountain, so you can head up the moment the cloud cover clears. The mountain's website has a ticker with up-to-the-minute visibility news. Tablemountain.net.

In 1997, the cableway that takes visitors up Table Mountain added a twist, literally: The tram slowly revolves as it rises. Hiking trails also wind up through the mountain's crevasses; the Platteklip Gorge path, from Tafelberg Road, was the first known ascent (in 1503), and the two-hour hike is still the easiest way up on foot. The top is cosmic--the gray sandstone plateau looks like the surface of another planet. Expect to reach the summit by sunset, and bring a bottle of wine. (The only restaurant at the top, Dizzie Dazzie, closes before the sunset is over.) Note: Resist the urge to linger. The last tram down follows the final sliver of sun, between 6 p.m. and 10 p.m. depending on the season. 011-27/21-424-8181, tablemountain.net, round trip $17.

At noon, a gun goes off on Signal Hill--the blast can be heard all around the city. It was originally intended to herald the arrival of ships into port. Today, it heralds brunch.

Sold from carts in most neighborhoods and at many 7-Elevens, Cape Town's street food reflects the city's diversity. Try bobotie, a curried mince pie originally made by the Cape Malay people; biltong, a thick South African jerky cured from beef, kudu, or ostrich; and Indian samosas, deep-fried pastry pockets of spicy meats.

7. March of many penguins

A sign on the walk approaching Boulders Beach reads: the easiest place in the world to make the acquaintance of penguins. It's no joke. There's a real colony of more than 4,000 African penguins, waddling around and fishing and paying absolutely no attention to the many pasty sunbathers competing for the sand. 1 Kleintuin Rd., Simon's Town, 011-27/21-786-2329, $2.25.

Hundreds of minibus taxis hurtle around town, stopping at random to pick up anyone ready for a little risk and a tight squeeze. Flag one almost anywhere (though for safety's sake it's best to stay in well-populated areas), and grab a seat with the other passengers. A guy in the back serves as a sort of carnival barker, shouting out the next stop from an open window. You can figure that most destinations in the city cost under a few bucks. A less alarming way to get oriented is a topless double-decker bus. The bright red Cape Town Explorer buses stop at 15 major attractions--from the city center to the Atlantic beach communities--and allow riders to get on and off at their leisure (011-27/21-511-1784, hyltonross.co.za, full day $14).

It's a popular misconception that Cape Point, a.k.a. the Cape of Good Hope, is the southernmost tip of Africa. (That distinction actually belongs to Cape Agulhas, a few hours to the east.) Nonetheless, Cape Point, a finger of rocky land 45 minutes south of town, where the Atlantic and Indian oceans abut, is spectacular. To get to the top, you hike 15 minutes uphill or take the five-minute ride on the funicular (look out for--but do not feed--the precocious chacma baboons, which roam free around the area). A lighthouse is one of the only buffers between you and constant 50-mile-per-hour winds, which add to the whole land's-end feeling of it all. Capepoint.co.za, $5.30.

It's impossible to visit South Africa without acknowledging apartheid and its aftereffects. The notorious Robben Island prison, a dusty spit of land in Table Bay where Nelson Mandela spent 18 of his 27 years behind bars, is a 30-minute ferry ride away. The island became a national monument in 1997; former political prisoners now run 21/2-hour tours that take in, among other things, the maximum-security facility and the garden Mandela started as a way to stay sane. The tours tend to fill up early, so it's best to book well in advance. 011-27/21-413-4220, robben-island.org.za, tour $23.

11. Lobster by another name

Just about every menu in town features "line fish," meaning whatever's fresh off the boat that day. Yellowtail and kingklip are both common, as is crayfish--which is actually what locals call lobster. At the beachside restaurant Paranga, in Camps Bay, succulent tails are chopped and served atop a bed of crispy lettuce. Shop No. 1 The Promenade, 011-27/21-438-0404, crayfish salad $25.

Capetonians' colonial heritage runs deep. Nowhere is that more apparent than at The Mount Nelson Hotel, a vast pink complex in the city's Garden section. A longtime haven for rich travelers, it also welcomes rubberneckers to an all-you-can-eat afternoon tea ($17), a mass of cookies, crumpets, and crustless sandwiches. 76 Orange St., 011-27/21-483-1000, mountnelson.co.za, 2:30 p.m.--5:30 p.m.

Every day, artisans from countries all across the continent gather at the city's largest outdoor market, in Greenmarket Square, to hawk handmade toys, sculptures, and boxes crafted from discarded materials. You might find a radio cobbled together from Fanta soda cans and bits of scrap wire, or a bag made of Amstel beer bottle caps. A couple blocks away, African crafts--masks, instruments, jewelry--are sold in the Pan-African Market, three stories of well-curated miniboutiques (76 Long St., between Longmarket and Shortmarket Sts., 011-27/21-426-4478).

People in Cape Town speak English, but it's their own version. One marvelous example: They call traffic lights "robots."

The Cape is one big peninsula, and every few miles, sandy bays peek out between rocky cliffs. The city's Atlantic coast, called the Cape Riviera, attracts all types: Surfers opt for Llandudno (pictured); the uninhibited go to clothing-optional Sandy Bay; beautiful people spend their lunch break strutting on the promenade at Camps Bay; and hardbodies congregate at Fourth Beach, one of four numerically named beaches in Clifton. Not that the point is to get wet; the water arrives by way of the South Pole.

It is entirely possible to vist Cape Town and feel like you're nowhere near the bush--that is, until you enter Khaya Nyama, a restaurant that puts an haute spin on wildlife with unusual dishes like crocodile carpaccio ($5.50) and grilled zebra steak ($14). 267 Long St., 011-27/21-424-2917. #18 Helicoptering qualifies as a sport A fleet of pilots along the Victoria and Alfred Waterfront peddle helicopter tours of the Cape. A 20-minute flight generally runs about $100 and takes in the city, the Clifton beaches, and Table Mountain. Sport Helicopters, run by Ernest McDonald, was the first outfitter around. The hour-long ride is a splurge at $300, but if you ask nicely the pilot might take you for a detour over Robben Island, which helps put its isolation in even greater perspective. 011-27/21-419-5907, sporthelicopters.co.za.

Like the nature-loving natives of San Francisco--it's pretty much impossible not to compare Cape Town to San Francisco, by the way--people in Cape Town don't take their dramatic geography for granted. The local tourism website has information about the many trails within city limits. Among the best: the 90-minute hike up Lion's Head. It's hard going, but the 360-degree views of the city and the Atlantic at the top make the haul worth it. Tourismcapetown.co.za.

Terri van Schaik at Pure Africa works with local artisans to make traditional jewelry with a modern spin--and a conscience: A quarter of the company's profit is reinvested in the artisans' often impoverished communities. Pure Africa's pieces are sold at a number of local gift shops, but Terri will also come to you, bringing her latest line to hotels and inns around town. 011-27/82-370-9694, pureafrica.co.za.

21. A road best driven in reverse

A six-mile succession of hairy switchbacks cut into cliffs above the Atlantic, Chapman's Peak Drive gives the Pacific Coast Highway a run for its money. Rock slides closed the road from 2000 until last year; now, elaborate catch fences and concrete overhangs deflect stray boulders. The road runs from Hout Bay, southwest of the city center, to Noordhoek, and you can drive it either direction, or go both ways (chapmanspeakdrive.co.za, $3 toll). The reverse route from Noordhoek to Hout Bay is best for two reasons: better views from the left side of the road (South Africans follow British traffic rules), and the opportunity to finish in Hout Bay, home of the stately Chapman's Peak Hotel. On a balcony overlooking a horseshoe beach, reward yourself with a cold Lion beer on draft, and calamari seared and served in the same cast-iron pan (Chapman's Peak Dr., Hout Bay, 011-27/21-790-1036, calamari $9).

22. A taste of townships

Residents of local townships Langa, Nyanga, and Guguletu lead four-hour tours that provide an up-close look at South Africa's massive underclass. Amid the overpopulated, tin-roofed, dirt-floored shacks are informal bars known as shebeens, where women stir pots of homemade grain beer that they serve while it's still steaming hot. Daring visitors are invited to pass around a communal metal bucket and sample the beer. Thuthuka Tours, 011-27/21-433-2429, half-day tour $38.

Every township has a sangoma, or traditional healer, who treats ailments through a variety of herbs, powders, tinctures, and animal skins. Any township tour (see #22) will include a stop at his hut, typically a dim shack that's adorned with skins, critter skulls, and desiccated snakes hanging from the ceiling like the world's creepiest party streamers. Upon request, he'll even treat tourists' ills.

Great white sharks congregate in large numbers in nearby waters, which might help to explain how the odd sport of shark diving started here. The idea is pretty simple: You're inside a cage, surrounded by fish entrails and bloody water; the sharks take the bait and gnash at your cage. It's safe--as long as you keep your hands inside--but terrifying. The capital of shark diving is two hours east of Cape Town in Gansbaai, a town that's also known as Shark Alley. White Shark Diving runs full-day trips that keep you underwater for a short but ample 15 minutes, and they'll drive you back and forth from Cape Town. 011-27/21-532-0470, white-shark-diving.com, $182, includes breakfast and lunch.

Pinotage, a cross between Pinot Noir and Cinsault grapes, originated in South Africa. The best place to sample it is Stellenbosch, a 45-minute drive from Cape Town, where more than 100 vineyards blanket the countryside. Stellenbosch is South Africa's second-oldest town, and its beautiful whitewashed Cape Dutch homes are exactly as they've been for the last 300 years. Wine Enthusiast bestowed 89 points on the 1999 Pinotage from Warwick Estate, a Spanish-style hacienda surrounded by clementine groves (pictured). The winery offers free tastings of its Pinotage, along with its bordeaux, chardonnay, and sauvignon blanc. On R44, west of Stellenbosch, 011-27/21-884-4410, warwickwine.co.za.