I kind of hate to admit it, but I'm looking forward to the Sex and the City movie coming out later this month (mostly because I know I'll laugh, and too few movies make you laugh anymore). Our other magazine, Girlfriend Getaways, has a story in the current issue in which we asked women outside NYC's Magnolia Bakery a bunch of SATC-related questions (such as "Aidan or Big?"). Their answers are here.

Which SATC character most represents you?

And which character would your friends say you are?

Theft from baggage: The TSA reponds to our readers 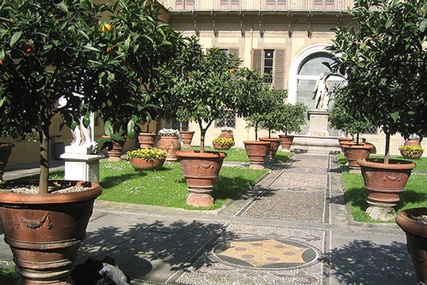 In Florence’s crowded historic center, it can feel like there are as many Americans as locals&#8212;and tourism board and province officials want it to stay that way. They were in New York recently to introduce the Fiorino Effect, a series of wide-ranging discounts they hope will keep Americans visiting despite the weak dollar. The promotion kicks off May 15&mdash;timed to the start of Il Genio Fiorentino, a 10-day festival&mdash;and runs through December 31. It provides a 10 percent discount at participating hotels and restaurants in Florence and neighboring small towns like Reggello and Barberino Val D’Elsa. Among the more affordable options, Giovanni da Verrazano, a 10-room hotel overlooking the main piazza of Greve, Chianti, made the cut for our Secret Hotels of Tuscany feature. And we’ve previously recommended the family-run Albergo Serena, an 18th-century building with patterned stone-tile floors, well-worn furnishings, and a convenient location by Florence’s Santa Maria Novella train station. Americans will also get free admission to the Palazzo Medici, a 20 percent discount on exhibits at the Palazzo Strozzi, and a 15 percent discount on performances at the Teatro del Maggio Musicale Fiorentino. Be sure to mention the Fiorino Effect when booking your hotel room and download the voucher before you go. It has an image of the fiorino (florin), a gold coin introduced in the 1200s by Florentine bankers and that enjoyed a heyday as the preferred currency for trade. The promoters are quick to compare it to the role played by the dollar&mdash;for now, anyway. MORE FROM BUDGET TRAVEL What $100 Buys in Florence

Affordable Europe: Save on trains

In Western Europe, trains are a cheaper and more convenient way to get around than many of the other options. City center to city center, with no check-ins, no baggage fees, and no extra costs to reach out-of-town airports. Here are tips on how to book your trip. If you only remember one website, remember www.bahn.de. Its online timetable will give you train times for almost any train journey anywhere in Europe. For Germany: Alas, the website www.bahn.de only sells tickets for journeys within Germany and many international trips to, or from, Germany. But it does these tasks well. For France: The French Railways website will sell tickets for any journey within France, and for the direct international trains from Paris to Spain, Italy, Switzerland, and Germany. They don’t make it easy for overseas travelers to book, so there’s advice on how to use it at www.seat61.com/France.htm. For Italy: The Italian Railways website will sell tickets for any journey within Italy, and for direct international journeys from Italy to France, Spain, Switzerland, and Germany. For Spain: The Spanish Railways website will sell tickets for any journey in Spain, you may have to use it in Spanish, but there are some special web fares that save 60 percent over what you will pay at the ticket office on the day of travel or if you buy from an agency. For Britain: See my previous post. Don’t assume you need an expensive railpass, even though they are heavily advertised. If you go direct to the European train company websites rather than booking through U.S. agencies, and book in advance on a no-refunds, no-changes basis, you can find some bargains out there. For example Paris-Geneva from &euro;35, Paris-Amsterdam &euro;70 return, Paris to Milan from &euro;35. &mdash;Mark Smith, writing from England, for our Affordable Europe series.

Where the dollar is strong: Iceland and South Africa

The dollar has gotten stronger against Iceland's krona (by about 22 percent) and South Africa's rand (by about 26 percent) in the past couple of years, according to the Wall Street Journal. Here's some trip inspiration for these two countries: Iceland has some of the planet's most spectacular (and unusual) natural scenery, not to mention it's the closest European country to the US. The most economical ways to go to the Land of Fire and Ice is to book an air-hotel package through Icelandair Holidays. For example, there is this Real Deal: Iceland Tour, 5 Nights, From $1,859 This whirlwind tour begins and ends in hip Reykjav&iacute;k, with stops at breathtaking attractions like Skaftafell National Park, the icebergs of J&ouml;kuls&aacute;rl&oacute;n, and scenic volcanic valleys. Round-trip airfare, five nights' accommodations, some meals, and guided tours from $1,859&mdash;plus taxes of about $100. The vacation wing of Icelandair also allows you to "build your own package"....which enables flexibility on number of nights, activities, etc. Should you want to forgo a package, then book your flight with Icelandair, and investigate staying at a guesthouse, which can be much more affordable than hotels, especially in Reykjavik. In summer, many working farms open their doors to visitors for overnight stays too. For listings, check out the Accommodations section of the tourism board's website: Visiticeland.com. Because it's so easy to get around Iceland, we'd also suggest renting a car and exploring on your own, i.e. not spending the extra money for organized tours to places you can easily visit on your own. And don't miss out on the amazing community mineral pools and hot pots-they're inexpensive but you'll leave feeling like a million bucks. South Africa is also a better bargain for Americans than ever. The one hiccup is finding an affordable airfare. That's part of the appeal of the vacation package being offered by Foreign Independent Tours: 10 Nights' South Africa Air/Hotel/Car, $2,599&mdash;plus taxes and fees of about $231. The deal includes round-trip airfare, 10 nights' accommodations, car rental, some meals, and game drives at the Amakhala Game Reserve. See our recent Real Deal. If you're thinking about renting a car for a day trip to the vineyards, note that most South African rental agencies put a 200-kilometer cap (about 125 miles) on free daily mileage. Two of the biggest draws near Cape Town&mdash;the Cape of Good Hope and the Winelands&mdash;are both about an hour from the city. Depending on how many wineries you want to visit, you'll probably have to pay extra. To guarantee unlimited mileage, you should secure reservations before leaving the U.S. Hertz and Avis both operate widely in South Africa, charging about $45 a day for a compact stick-shift car; automatics are typically twice as expensive. Because the dollar is so strong right now in South Africa, you may want to consider hiring a guide, who would double as their designated driver, starting at about $60 a person&mdash;or from about $200 per carload. You'll probably travel in a minibus, but at least you won't have to worry about driving. Some of our readers have reported good experiences with Beautiful Cape Town Exclusive Tours. As always, feel free to chime in with your own tips for visiting these countries.