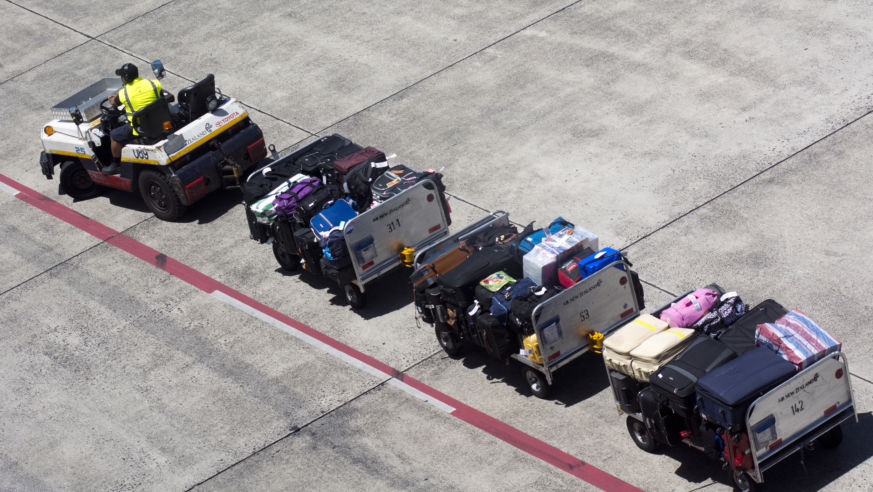 Hot on the heels of the busiest summer travel season in TSA history, America’s major airlines have announced new fee structures for checked luggage, overweight baggage, and more. Here’s what you need to know.

In August, when JetBlue raised checked-baggage fees for the first time in the company’s history, it wasn’t long before the other major airlines followed suit. Delta, American, and United all upped their rates in early September, and though the increases don’t amount to much individually—a $5 bump for the first and second checked bags, from $25 to $30 and $35 to $40, respectively—they definitely add up. Last year, those four airlines raked in $3.2 billion in baggage fees alone, according to the Bureau of Transportation Statistics, and with the TSA notching a record-breaking summer this year, screening some 253 million travelers and handling nearly 165 million pieces of checked baggage in the process, those numbers only look set to skyrocket.

“Airlines are not worried about fewer passengers checking bags,” says Brian Sumers, senior aviation business editor for Skift. “Generally, people check bags not because they want to—who really wants to wait for 20 minutes at baggage claim?—but because they have to. A lot of people have no choice. They need to bring a larger bag, and so they pay for it.” But putting in time at the baggage carousel isn’t the only game in town. For those who pack light, going carry-on only is a time-tested strategy, and shipping gear to your final destination can be a good idea—albeit a pricey one.

So, is it worth it to pay a premium to stow your luggage in the cargo hold, or are you better off exercising a different option? That depends on your priorities, your finances, and your luggage itself.

To be sure, checking bags means allocating more time and money to a travel day. From getting to the airport earlier to deal with check-in to shelling out extra cash for each bag to hanging around waiting for your luggage once you’ve landed, the investment can be a significant one. And though airlines’ track record with lost luggage is getting better, there’s still a chance your suitcase will end up missing in action once it hits that conveyor belt.

One alternative is keeping your baggage to a minimum. “Sticking to a carry-on and wearing bulkier items while you travel are tried-and-true ways to avoid checking a bag,” says David Solomito, Kayak’s VP of North American Marketing. “The most important thing is to ensure your bag stands at 21 inches or less so it will be accepted on most carriers as a carry-on.” But even then, if you’re not lucky enough to score space in the overhead bin, you’re still at risk for the dreaded gate-check—not bad when your rollaboard is waiting for you on the jet bridge, definitely more of a hassle when you have to go down to baggage claim to retrieve it. And then there are the emotional costs involved with paring down. “We hear stories about people cramming their carry-ons with stuff to save money,” Sumers says. “If people really can't afford the extra $30, then it's understandable that they want to carry on as much luggage as they can. But that approach can be stressful, and with bag fees only going up by $5, it's probably not worth it.”

For those who prefer to make their departure day as low-impact as possible, services like Luggage Forward and Luggage Free and traditional mailers like UPS, DHL, and the U.S. Postal Service can take care of the heavy lifting. You’ll arrive at the airport unburdened by your baggage, but there’s more work involved in the run-up to your flight: weighing the package, pricing out options, arranging for shipping, and calling ahead to let the hotel know to expect a delivery in your name. And sending stuff ahead doesn’t eliminate the risk of lost baggage either, so you’ll still need insurance—and that’s on top of the potential sticker shock associated with obtaining a quote. “Try an experiment sometime,” says Sumers. “Lug your 50-pound bag to FedEx and ask them what it will cost to ship it from New York to Los Angeles overnight. I guarantee you it will cost more than $30—a lot more. Checking a bag is still the cheapest way to get a heavy item from one place to another.”

Not so fast, says Luggage Free president Jeff Boyd: For travelers who plan to check multiple bags, a shipping service can be smart value for the money. “The third bag on JetBlue, for example, recently moved to $150,” Boyd says. “By contrast, our rates start at $67 for a bag up to 25 pounds and $94 for a bag up to 50 pounds. So you’re starting to see a dual-value proposition that includes hassle-free travel—skipping check-in lines and waits at the baggage carousel—at a cost very similar to those incurred when checking with the airline.”

Say you found an irresistible bottle of rosé on a winery crawl, and you absolutely must check a bag. First, consider where your loyalties lie—a change of carrier might be in order, especially if you earn miles with one of the airlines that recently raised its fees. Thanks in part to its checked-luggage policy (two free bags per person!), Southwest was named Budget Travel’s best airline of 2018, and its passengers enjoy low fares and entertaining safety announcements to boot.

If you’re not married to one particular airline, you’ll want to shop around to see which offers the best deal for your circumstances on a flight-by-flight basis: While checked bags cost the same on the major carriers, oversize and overweight baggage fees vary from company to company based on destination, size, weight, and fare class. Toggling between each airline’s website to compare and contrast can be a chore, but fare aggregator and booking site Kayak has a few tools to help travelers find the best fit for their luggage needs, including a fee assistant, which lets users modify their flight search based on the number of bags—carry-on and checked—they’ll be packing, and on the app,  a bag-measurement feature, which uses augmented reality determine whether a suitcase will fit in the overhead bin or need to be checked and compares baggage-fee policies for all Kayak tracked airlines in the process.

For those who stay true to one carrier, an airline-specific credit card might be worth the annual fee. They often offer free checked bags to cardholders and a companion, but read the terms and conditions with a healthy dose of skepticism, especially if the offer seems too good to be true—that kind of perk can also serve as a hook to get new clients on the line. “Those credit cards are highly profitable for airlines,” Sumers says. “An airline would be very happy if customers who did not want to pay $30 [to check a bag] instead signed up for, say, the Chase United Airlines credit card.”

For most fliers, the extra $5 to check that first or second bag isn't going to be what breaks the bank, but families, long-haul travelers, and those packing especially heavy or oversized luggage need to do their due diligence. Read the fine print before booking, weigh and measure your suitcases, and price out shipping services before committing to check bags with the airlines. As they say, forewarned is forearmed.