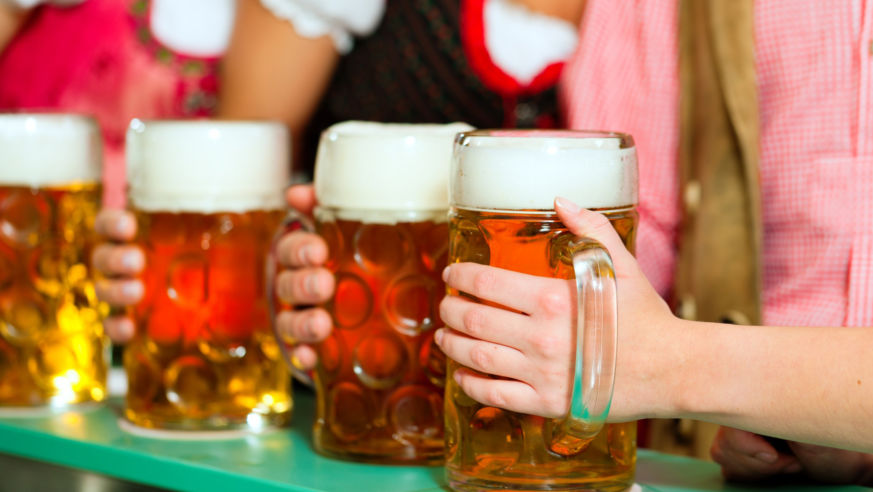 Last year, revelers drank a record 7 million liters of German beer at Munich’s annual Oktoberfest, billed as the world’s largest fair. But for our man in the trenches, it’s not all cold beer and hot pretzels. Think drunken brawls, filthy tents, and bad tips—all while dressed in traditional lederhosen.

STEREOTYPES FIT
For Germans, Oktoberfest is more for families and older people—a place where businessmen meet for lunch. When it comes to foreign tourists, the stereotypes kind of fit. English people tend to brawl more than others. It's not uncommon to actually see glasses flying through the air. But in my experience, I'd say people end up quite the same when they get really drunk. Doesn't matter anymore where they're from.

YOU WOULD NOT BELIEVE HOW DIRTY IT GETS IN THE TRENCHES
For first timers, it's kind of hard to imagine how noisy and dirty it can be in the Oktoberfest tents. Each of the big ones holds about 5,000 people. In the evenings, it gets really messy. People leave behind their umbrellas, their raincoats, their cell phones. There are loads of broken glasses on the floor, spilled food. People stand on the benches with dirty shoes. And then: People drink and throw up. They puke in the tents, under the tables. We carry these big trays with maybe 12 or 14 different plates of food on them. The worst thing I ever saw was when a colleague of mine put one down on the table, and a guy puked right on it. So…that was kind of disgusting.

PREPARE TO HAVE YOUR CLOTHING DESTROYED
It doesn't bother me when tourists wear lederhosen (leather shorts), as long as they wear real lederhosen and not one of those T-shirts with the pattern printed on it! I would actually recommend wearing one, because you'll probably destroy every other item you could wear. They're tough. You can wipe things off them. Especially in Oktoberfest party tents, people wave their beer glasses around with the band—I haven't seen anybody get out of there clean. It's really a mess. For example, waiters can carry 14 beers at a time, six in each hand, and one balanced on top of each group of six. And you tend to spill a lot. You have to move fast, and then you set them down heavily. You end up soaked in beer after your shift. I wouldn't wear anything else but lederhosen. I don't envy the girls!

DRUNK ON THE JOB
"Officially," I don't drink on the job. But I can hardly think of anyone who lasts the whole 17 days without drinking at work. It's quite common for guests to buy you a beer. It's probably the best way to get on the waiter's good side.

WE DON'T HAVE TO BE NICE
As an Oktoberfest waiter, you make the patrons treat you well, or they just won't get served. So it's not like in an ordinary restaurant where you have to be really nice to people. If you don't like someone at Oktoberfest, you just kick them out. For 17 days, I get to behave a bit like an a--hole!

THE WORST JOB IN ALL OF OKTOBERFEST
Being a bouncer is really a hell of a job. You get abused all the time! On the weekends, they close down the tents, because they get so full. Every door is closed and guarded by about four to six bouncers at least. "Why won't you let me in? I'll give you 50 bucks…Why won't you?!" And then there's name-calling. It's a tough job. But I wouldn't mess with an Oktoberfest bouncer. Really, if they say go, then go, because that's not going to end well.

IN MY EXPERIENCE, ITALIANS CAN'T HANDLE THEIR BEER
The second of the three Oktoberfest weekends is nicknamed "Italian weekend," because it's when all the Italians come and none of the waiters like them very much. They drink about two beers, and they tip badly. Plus, they aren't used to beers, so after one or two, they're usually sick.

WE LOVE AMERICANS
The United States might have a bad reputation internationally, but the general American population does not at all. I've been a waiter for years, and if I could choose, I'd have all American guests. And it's not just because of the good tips! Germans and other tourists are really tight and not very grateful. Americans are easier to talk to. They're not so complicated. If you tell them a little bit about whatever they want to see or where they should go, they appreciate that. They're not like, "Oh, I don't care." They treat you like a regular guy, not just some guy who serves them.

35 Brilliant Rainbows Around the World