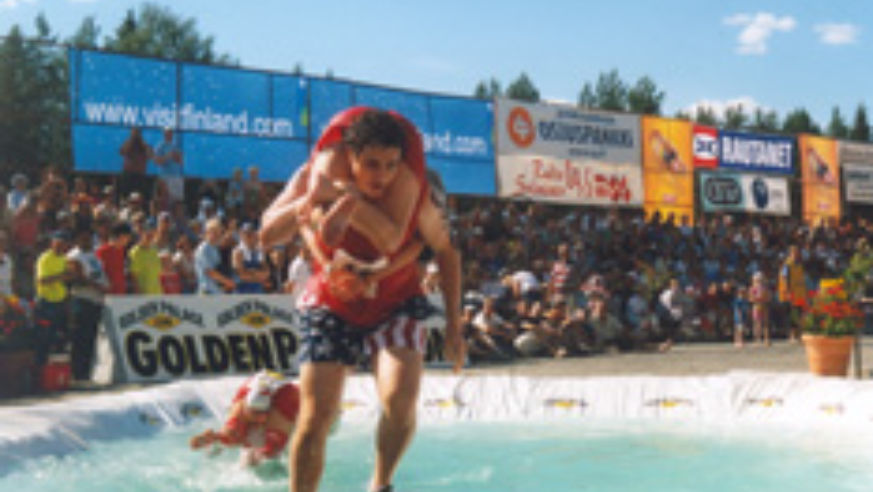 We recently asked readers of this blog, "What's the craziest festival you've seen?" Here you'll find some fantastic stories. (And be sure to check out our festival slide show.)

I lived in Byron, Illinois, several years ago and attended The Turkey Testicle Festival. The festival is always the 2nd Saturday in October, and the first band starts around 11:00am. and the last band plays until 11:00pm. It is a huge event and just about the entire town gets involved. There is dancing and lot's of drinking and yes, for those wondering you have to get an order of Turkey Testicles as they really do serve them. It was a lot of fun and if you are out that way make sure you don't miss it! (Sorry, No one under 21 will be admitted to the Festival.)--Debbie

The Trenary Outhouse Classic in the Upper Peninsula of Michigan is the place to be on the last Saturday in February. The crowd of 1,500 to 3,000 watches as two person teams slide elaborately decorated outhouses on skis approximately 200 yards over the snow. Trenary, Michigan.--Jamie D.

Caseville, Michigan (near the tip of the "Thumb"), has the summer's best festival: Cheeseburger in Caseville. The Tropical Parade of Fools on Wednesday is awesome. People are dressed as pirates, Caribbean sunbeams, bikini girls, etc. The row, row, your cardboard boat race in Lake Huron is fun, and there is plenty of beach fun. concerts almost every night, and cheeseburgers for sale on grills up and down Main Street. Always in August.--Sally Stewart

I'm not sure why Michigan seems to be dominating this list, but I have to put in a plug for the Bologna Festival in Yale, Michigan. What's not to love about a town that is literally full of baloney?--Mike Hofert

Last summer I attended the the World Wife-Carrying Championships in Sonkajarvi, Finland. It's a crazy day full of strange and wonderful Finnish traditions. The participants come from all over the world (but mostly Estonia, who completely dominant the competition) to hoist women up on their shoulders in the most hilarious holds in the hopes of winning the honor of first place and....the wife's weight in beer. Sadly, I wasn't able to attend the Mobile Phone Throwing Championships in Savonlinna while I was Finland. Maybe on my next trip!--Anonymous

miles from Sacramento, Calif., called Isleton. People come from as far as Louisiana just to here the cajun bands and eat crawfish. This year I took a picture with a CRAWDAD MASCOT. He was very entaining. It has calmed down over the years as it had a New Orleans Madri Grai atmosphere. It is more family oriented. I know because I live in Isleton, Ca. and have attended all festivals during the past 25 years!--Dianna Souza Smith

One summer, when my boyfriend and I were heading north to Michigan's Upper Peninsula, we found the highway (I-75) blocked because of an accident. We inched our way to the nearest exit to hang out until the accident was cleared. We found ourselves in Munger, Michigan, where the annual Potato Festival was being held! What a cool country festival! They handed out free 5-lb. bags of potatoes to anyone willing to stand in line for them. I noticed some people were willing to stand in line more than once!--Petie