Cruise news: Bookings on the humongous Oasis of the Seas 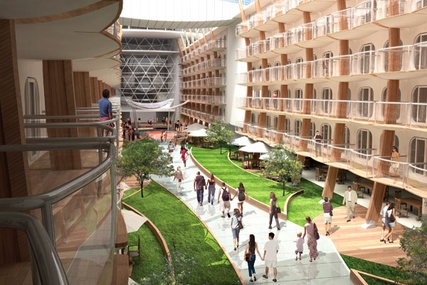 This December, Royal Caribbean debuts the largest cruise ship in the world, the Oasis of the Seas. We reported on the "gi-normous" (and very cool) ship last summer. At 220,000-tons, with 18 decks and seven distinct neighborhoods (including one with a zip line!), it'll be quite a sight.

If you'd like to be part of cruising history, bookings are still available on the ship's earliest trips departing from Fort Lauderdale. The inaugural voyage for the Oasis was originally set for December 12, but Royal Caribbean recently elected to move it up a week, to December 5, 2009. Additionally, there will be a quickie four-night cruise on December 1, to mark the opening of Labadee, the cruise line's private island in Haiti.

I did a Kayak cruise search today to see if other booking sites could beat those prices. I didn't have any luck. But, booking agencies such as cruises.com, cruisesonly.com, and cruise411.com are offering bonuses like 10 percent off shore excursions for all bookings and a free spa treatment if you book a balcony cabin or above on the Oasis. And Travel Themes and Dreams, one of Budget Travel's favorite booking agencies, is offering balcony cabins for the December 12 cruise for $1,369 (the regular rate) but also throwing in a $100 shipboard credit.

There's a chance prices could come down as the dates get closer—after all, the ship can handle nearly 6,300 passengers. Keep watching Kayak, and be prepared to book at the last minute for great rates.

Want more? See the Washington Post's recent sneak peak of the Oasis of the Seas. Or you could visit the official site.

Cruises: Tech tips from a pro

Paul Motter is editor of Cruisemates, which has been publishing impartial cruise reviews and news stories for a decade. We checked in with Motter for some tips on how to stay "wired" while at sea. What's the best way to keep up on your e-mail while on a cruise ship? Bring your own laptop. Skip the cruise ship Internet caf&eacute;s, which generally cost 30&cent; to 75&cent; per minute&mdash;not cheap. Most cruise ships now have wireless access (WiFi) enabled. The newer the ship, the more likely that it will offer wireless, and if it is even newer they will have it in your stateroom. Whether or not wireless is available ship-wide can be found out by calling your cruise line or by going to cruise user websites like (ahem) CruiseMates and asking in the message boards. Use your laptop to log on and off frequently. For example, download all of your email and read it offline. If you are on your own laptop you can even reply to all of your email in messages that you save, and then send those messages after you re-connect to the Internet. Cruise often? You may be able to get around these Internet usage fees by joining frequent cruiser clubs on certain lines. They may include free or reduced Internet time as a perk for frequent cruisers. Another alternative is to look for Internet caf&eacute;s in port. They are very common, just ask the crew. In the Caribbean you will pay about $5/hour, whereas onboard it will cost you up to 10 times as much. Always highlight and copy anything you write before you try to send it from a ship. You can type for an hour and lose everything if the connection fails. Best practice is to always compose offline, save a copy, and then copy and paste it when you are ready to send it over the Internet. Cruise ship web access is comparatively slow compared to most land-based broadband connections because ships must use satellite communication. I suggest you buy the most minutes possible&mdash;say, 100 minutes for $35. The minutes are cheaper when purchased in larger packages. That way you will be able to use the Internet when you want without fretting that you are using it too much. Most ships allow you full access from your laptop, meaning they allow you to blog, upload pictures, and update your blog. But some ships limit what kind of traffic will go through the network. Some ships will block the email protocol forcing you to use web-based email, for example. Or they may block secure FTP so you cannot update your web site. If your business requires you to stay connected to the Web, call your cruise line in advance to make sure you have the info you need. If you want to send pictures home, set your camera to a smaller resolution (800x600). Or even better leave your camera at a high resolution but have a program on your computer where you can make copies at smaller resolutions. A typical 5 megapixel picture might take 5 minutes to upload. But a smaller 800x600 will only take a few seconds. Not a "power" user of the Internet while on vacation? Understood. For you, a few minutes of use of on-board Internet caf&eacute;s, will generally do the trick. Remember, you will be on a strange computer with nothing stored for you. If you have a cable-modem or DSL account at home (Comcast, Verizon, etc.), you may need to go to your Internet provider and discover the web site for web-based email. If you have an AOL address, for example, you must open a browser and go to aol.com and log in to your webmail account. Some ships may run AOL on their computers but most do not. Write down the exact URL for your webmail account. Also: Before you sail, write down key usernames and passwords to bring on-board. EARLIER Solo travel: Avoid getting "singled out" for fees on cruise ships (14 comments) MORE FROM BUDGET TRAVEL How to Pick the Right Cruise Cabin

Loyal reader Clarence Moore wrote in to us in response to our recent blog posts on Viking and Uniworld introducing new river cruise ships and Avalon christening a new river cruise ship: There are a couple of rivers in the east of Spain and the Po River in Italy that NEED river cruise ships. Additionally, the river north of Prague to Berlin is well covered, but on north to Hamburg and to the sea is hardly covered at all. There are canals and river systems right through from Amsterdam to Berlin, but this route is NOT covered except by one European company with ONE trip annually, if even that now. Yet, they have Hansel and Gretel houses and entire villages through that area that are VERY attractive. The Oder River and other Polish rivers are inadequately or not covered at all. One river goes north and one south not too far after you leave Vienna or Budapest on the Danube&mdash;both navigable, but NO cruises! Any way you could help increase interest in these potential river cruises? We need American companies, like Uniworld or Viking to cover them all! Thanks! 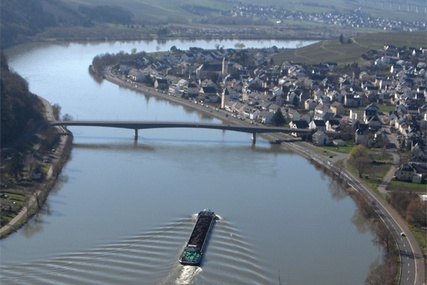 River Cruises: Watch out for bankruptcies

The popular German river cruise company Peter Deilmann Cruises will shut down its river cruise operation by year end due to money trouble. [UPDATE 7/10: Its ocean cruises will continue to operate.] Meanwhile, one of the largest European operators, Viking River Cruises, has been having a bumpy ride financially. A planned funding deal this past spring to cover expenses has fallen through. But&mdash;unsurprisingly&mdash;Viking claims it is in sound financial condition, reports The Travel Insider. Bottom line&mdash;be careful with whom you book a river cruise with. Given the struggling economy, river cruise lines&mdash;and the travel agencies that sell them&mdash;may sink in red ink. Book with a credit card. If you never receive the cruise you paid for, write a letter to the "billing inquiries" address on your credit card statement (and keep a photocopy for your records). You should get a refund to your card within 60 days, thanks to protection under the federal Fair Credit Billing Act. If you buy travel insurance, buy it directly from an insurer like Travel Guard or Access America rather than from a cruise line or travel agency, which may go bankrupt and charge marked-up prices for policies.

Cruises: How did one reader nab $74 a day on Princess?

An amazing deal on a cruise was nabbed by Budget Travel blog reader Maureen of Mission Viejo, Calif. She scored a 30-day South American cruise from Los Angeles to Rio de Janeiro leaving on Nov. 22, 2009. Her obstructed ocean view cabin was only $1,697. After you include government taxes and mandatory gratuities, it figures out to be only $74 a day per person! That's about a third cheaper than the list price. Maureen says: Right now the current brochure for the cruise we are taking states a balcony fare from $2,979, add $197 govt.fees/taxes plus $330 tips ($11 per day added on by Princess per person). The math for this trip figures out to be $110 a day for a balcony room. Even more impressive, Maureen is paying about 59 percent less per day for her upcoming cruise than the last Princess cruise she took (staying in a comparable berth). Consider that Maureen went on a 10-day eastern Caribbean cruise with Princess this past January and paid $1,730 per person for a balcony (no fuel charges). Adding the $110 for taxes and tips that trip came to $184 a day. We asked her how she got the deal, to see if we could pick up some pointers: We got this deal from a Princess brochure mailed to us as frequent Princess cruisers (having been on Princess at least three times). We have been receiving these "exclusives-special offers just for you" frequently as well as mailers from other cruise companies. I have been monitoring the prices of all of the cruise lines for the last 4 months. This price was just reduced on Princess's website on June 10th. Maureen's tip: Use a travel agent, but negotiate I chose to book through a local travel agent I have used before. She is really good, thorough, and only deals in cruises. She makes all the phone calls to Princess regarding questions I may have. I saw the Princess eastern caribbean cruise we recently went on listed in Vacationstogo.com for the same price as the Princess website was quoting but with $100 shipboard credit and a free bottle of wine. I told her I would rather book with her and would she match that website's extra offerings? She not only met vacations freebies but added a big bottle of water to our stateroom. She also gave this same deal to my girlfriend who was traveling with us and who ended up booking through her. Maybe people do not want to go to South America??? Maybe that explains the low cost? We have never been south of Mexico. And we live an hour north from Los Angeles harbor where the cruise starts. The only major cost for us is the price of flying back from Rio where the cruise ends during the Christmas holidays. But we have found some good fares on the internet around $900-$1,000. Congrats, Maureen, on your great deal. And thanks for sharing your tips! MORE FROM BUDGET TRAVEL Real Deals in Cruises, hand-picked by our editors