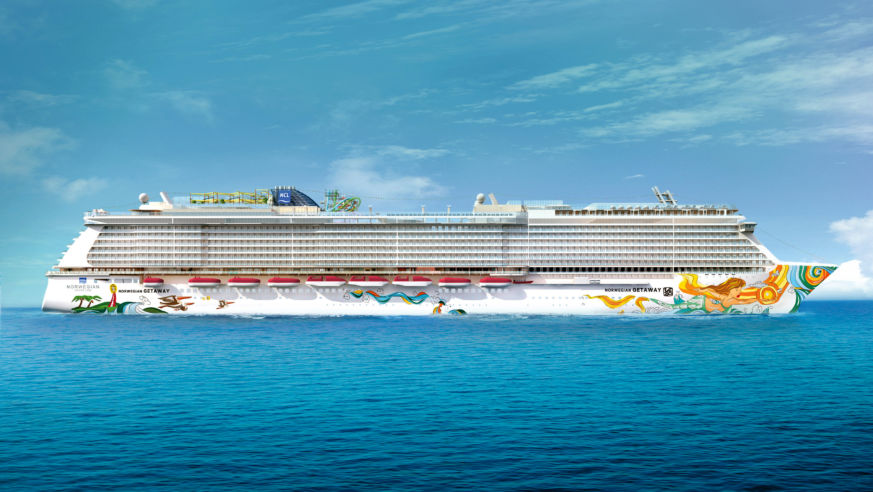 The Norwegian Getaway is one of a new generation of mega-ships that are transforming cruising—and sparking price wars that can work in your favor!

Glaciers in Alaska! The glittering capitals of the Mediterranean! The Caribbean’s most alluring islands! A new generation of mega-ship—and industry-wide price wars—are making these and other dream cruises more affordable than ever before.

Whether you're an experienced cruiser or a newbie, we all have one thing in common: We're on the lookout for that knockout, can't-miss cruise of a lifetime—that we can actually pay for! For a lot of us, that means we want to sail somewhere rich in natural beauty or history (or both!); enjoy living, playing, and eating on the ship itself; and bring home great stories and souvenirs. If that can be wrapped in a neat weeklong package for under $1,000, I'd call that a smashing success. So, what's your dream cruise? We identified three categories that get most travelers' adrenaline buzzing: a string of knockout Mediterranean ports of call, venturing up Alaska's Inside Passage to see glaciers, and, of course, sailing to the Caribbean's inviting ports and beaches. But when you start wading into the sea of cruise itineraries, styles, and prices, those dreams may start to feel out of reach. I turned to some experts to ensure smooth sailing.

"Mediterranean cruises are popular from early spring through the late fall, and you can find cruises that include memorable ports like Barcelona, Istanbul, or Santorini," suggests Linda Garrison, About.com expert on cruises. "You can definitely find a seven-day cruise for less than $1,000." (Airfare to a European cruise port like Barcelona is another matter, of course, and part of your Mediterranean cruise planning may have to include using some frequent flier miles to get you across the pond!) "This year, Norwegian Cruise Lines, Costa Cruises, and MSC Cruises have the most seven-to-12-day Mediterranean cruises selling for less than $1,000 per person in an inside cabin," Garrison notes. "The Norwegian Epic sails from Barcelona for seven days and visits Naples, Rome, Florence, Cannes, and Mallorca." The Mediterranean also raises the possibility of adding a continent to your collection of passport stamps: "The MSC Splendida, which sails from Barcelona for seven days, not only visits Marseille, Genoa, Naples, and Sicily, but also La Goulette, Tunisia—in North Africa," Garrison says. To explore a little farther east, the Costa Fascinosa sails round-trip from Venice to ports of call in Italy, Croatia, and the Greek isles. And you can save even more money by sailing in the off-season—either early spring or late fall: "The Norwegian Jade and Norwegian Spirit sail 10-, 11-, and 12-night cruises of the Mediterranean in November or December 2014 starting at $999 or less. Imagine boarding the Norwegian Spirit in Barcelona, stopovers in Italy, Greece, and Turkey, then disembarking in Venice 12 days later!" If you're willing—and able—to pay a little more ($1,149), you can even get an inside stateroom on Cunard's fabled Queen Elizabeth for the seven-night Pearls of the Adriatic cruise, embarking from Rome and visiting the ports of call Corfu, Kotor, and Dubrovnic before disembarking in Venice this June

If weather predictions hold true, El Nino may mean that 2014's exceptionally cold winter may be followed by an exceptionally hot summer. The cure for the summertime blues? Head north—way north. "Alaska can be expensive," cautions Garrison, "but at least five cruise lines are sailing to Alaska on seven-night cruises during the months of May through September for less than $1,000 per person, including Carnival, Celebrity, Holland America, Norwegian, Princess, and Royal Caribbean." In some cases, the price tag can be even lower: The popular Celebrity Solstice sails seven-night cruises round-trip from Seattle to the Inside Passage of Alaska for 17 weeks this summer, with prices as low as $649 per person for a week in May. Garrison assures us, "Even mid-summer cruises can be had at a good price."

When most people think "cruise," the first thing that comes to mind is a Florida departure for Caribbean islands—browsing colorful markets in exotic ports like Nassau. The good news is, there are more than 2,000 Caribbean cruises to choose from in 2014 and competition is fierce, which helps to keep prices relatively low (except during holidays). "Disney Cruises caters to families," notes Garrison, "so obviously its prices are best during the school year." The Disney Magic was significantly renovated in 2013: "Cruisers can sail round-trip from Florida's Port Canaveral for seven days in late October/early November for about $1,000 per person." If you want to try a really big ship, you can sail on the world's largest—Royal Caribbean's Oasis of the Seas and the Allure of the Seas—for about the same price. "This year is the 100th anniversary of the Panama Canal, and the Holland America Zuiderdam sails a dozen 10- or 11-night cruises of the Caribbean that include a partial transit of the canal." An inside cabin will run you less than $1,000. "You can keep costs down on a Caribbean cruise by driving to the embarkation port," says Garrison. Of course, south Florida, where many Caribbean cruises embark, is a long drive for most Americans. Midwesterners, rejoice: "Carnival Cruises has two of its newest ships based in ports easily accessible to those who live in the middle of the country. The Carnival Dream sails from New Orleans, and the Carnival Magic sails from Galveston, TX, on seven-day Caribbean cruises at affordable prices—often less than $100 per day per person."

MAKE PRICE WARS WORK FOR YOU

This year may be one of the best to embark on your affordable dream cruise. Especially in the Caribbean. New mega-ships (see "New Ships," below) will add more than 15,000 berths to the Caribbean in 2014, likely leading to price wars that can mean big savings for cruisers. Sherri Eisenberg, editor-in-chief of Bon Voyage, a digital cruise magazine published by Cruiseline.com, says "Competition is going to be fierce in the Caribbean. The new ships are going to try to outdo one another to get people onboard. You'll probably find bargains on older ships trying to fill occupancies." Eisenberg suggests that if you're considering booking a bargain on an older vessel, make sure to read recent customer reviews (rather than the reviews published when the ship debuted—that can mean an outdated review from 10 or more years ago). Of course, Eisenberg knows customer reviews—Cruiseline.com is a carefully curated source of authentic reviews (read: not public relations posts masquerading as customer reviews). In addition to thousands of brand-new berths, the Caribbean is also seeing an influx of ships that formerly cruised the Mediterranean due to the high cost of airfare from the U.S. to Europe. The MSC Divina offers seven nights from $429 with kids 11 and under sailing for free; the Norwegian Getaway offers seven nights from $649; Regal Princess offers seven nights from $749; and Quantum of the Seas offers eight nights from $1,059.

Just when you thought cruising couldn't get any more elegant... These new mega-ships not only offer every comfort and convenience you'd expect from world-class vessels. They are also bumping up the activity and adventure factor, says Eisenberg. Skydiving, racing, top chefs, and unique shore experiences are just the beginning.

MSC Divina. Give a hearty North American welcome to this Italian ship, which arrived in the Caribbean from Europe in November 2013. Sailing year-round out of Miami, 3,500 passengers can enjoy an Eataly restaurant, Formula 1 racing simulators, infinity pool, and an authentic Italian-style espresso bar. And in deference to its new home in America, smoking is now prohibited in most onboard areas.

Norwegian Getaway. Want to explore the Eastern Caribbean aboard a ship that pays homage to the culture of its native Miami? The Getaway is Norwegian's second "Breakaway" Class ship and will allow 4,000 passengers to indulge in restaurants from star chef Geoffrey Zakarian, an Illusionarium magic-themed show, and an offshoot of Los Angeles's Grammy Museum, "The Grammy Experience." Water slides, more than 20 bars, and Broadway-style theater and dance productions will encourage you to carpe every diem.

Regal Princess. Debuting in May, this sister ship to the Royal Princess will help introduce 3,500 guests to the "next generation" of vessels. Princess's biggest-ever top-deck pool will host nightly water and light shows, the ship will show "movies under the stars," and the jaw-dropping SeaWalk lets guests walk 28 feet beyond the ship's edge to savor sea views (including the water 128 feet below!). The ship will also balance kid-friendly amenities with adults-only fun.

Quantum of the Seas. Sure, you have to wait till November for this ship's "firsts," but it won't disappoint: The RipCord by iFLY is an onboard skydiving adventure; North Star is a glass capsule that extends 300 feet above the ship), and SealPlex is an immense sports and entertainment center that will feel more like an onboard amusement park. Want an inside stateroom bargain and an ocean view? "Virtual Balconies" will do the trick!