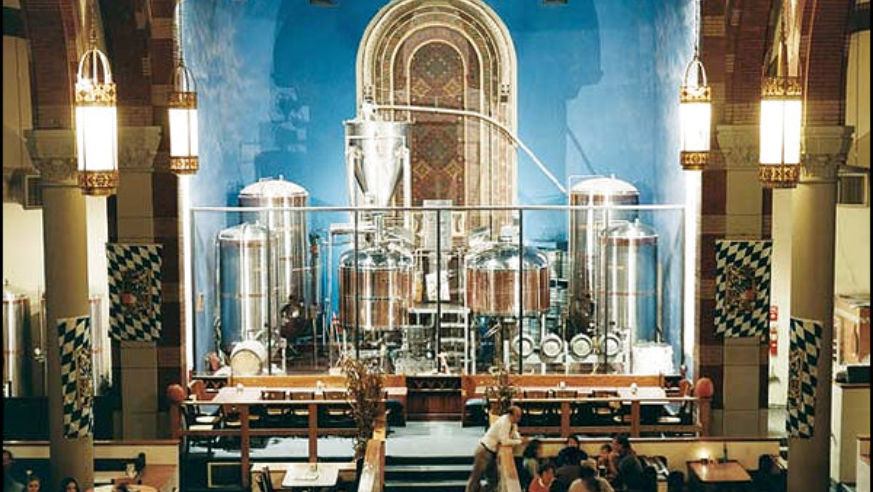 Joanna Michaelides
Church Brew Works: Beer is brewed where the altar used to be

It's not an oxymoron: Does your local art museum have rock bands and a mixed-tape exchange?

It's an unseasonably chilly Friday night in Pittsburgh, but inside the Andy Warhol Museum, a swarm of stylish 20- and 30-somethings aren't letting that stop them from imagining themselves at a Factory party. Wandering around the lobby, wine glasses in hand, they gather around Pop Art prints. The museum's theater has been temporarily turned into a concert space, and indie rockers The Mountain Goats can be heard tuning their guitars. It's part of the museum's weekly Good Fridays event; admission is slashed in half, and young folks gather from 5 p.m. to 10 p.m. for drinks and special programs, such as a mixed-tape exchange, in which participants swap cassettes they've made.

Among them is Rob Conroy, a 35-year-old lawyer and music writer. "The Warhol is one of my favorite things about Pittsburgh," says Conroy, a native who returned in 1996, after graduating from Widener University in Harrisburg, to practice law (and go to concerts). "I love that it exists here--despite the fact that Warhol is probably turning in his grave. He hated our city so much."

The artist fled home when he was 21 and never looked back. But his legacy looms large, and thanks to developments of the last two decades--cheap rents and plenty of grant money--he'd find it far more welcoming than in the old days. "People come to Pittsburgh to visit family or college friends, and they say, 'Wow!' " says Stephanie Giuffre, who moved from San Diego two years ago. Giuffre is a cofounder of Art From Chaos, a collective that puts on avant-garde exhibits and concerts (artfromchaos.org). "Lots of people are working at making Pittsburgh more culturally recognized," Giuffre says. Next month, her nonprofit will be doing its part by staging a fashion and live-music event, called Pendulum, with video art and works by local designer Kairi Kramer that will show how fashion trends evolved between the 1920s and 1970s.

One of the best of the museums on the city's North Side is the four-floor Mattress Factory, devoted to contemporary installation art. Among its holdings is James Turrell's fascinating Pleiades, a dark room in which viewers sit and wait for their eyes to adjust, revealing a purplish cube of light.

Two doors down, at 408 Sampsonia Way, is House Poem, a living installation by Huang Xiang, a Chinese writer who spent 12 years in prison for defying the Communist government. Huang moved to Pittsburgh in 2004 as part of a program called City of Asylum, in which the city provides housing and funding to exiled writers. Huang has never succeeded in having a poem published in China, but he has found another outlet: his house. Visitors aren't allowed inside, but they can see parts of a dozen poems, in bold calligraphy, on the wooden walls. An inscription on the door translates to NEST OF DREAMS.

"People are making the most of what was here before," says Conroy, the lawyer/ music writer. Take the Church Brew Works, a popular spot for pierogies, steaks, and Steelers talk. It's in an abandoned church--brewing tanks full of ales and lagers now stand where the altar once was. The Grand Concourse, a 500-seat restaurant where light pours in through stained-glass windows, is a former train station. It's now a Sunday-brunch mainstay, with a buffet featuring made-to-order omelets and homemade doughnuts. Even some of the best "new" hangouts are throwbacks: Hipster nightspot Kelly's Bar and Lounge was recently refurbished to look like it did during its 1940s art deco heyday. And the Prelude Wine Bar is in a historic-landmark building from 1906 that once housed offices and a nightclub in its lobby. It's since become the Renaissance Pittsburgh Hotel.