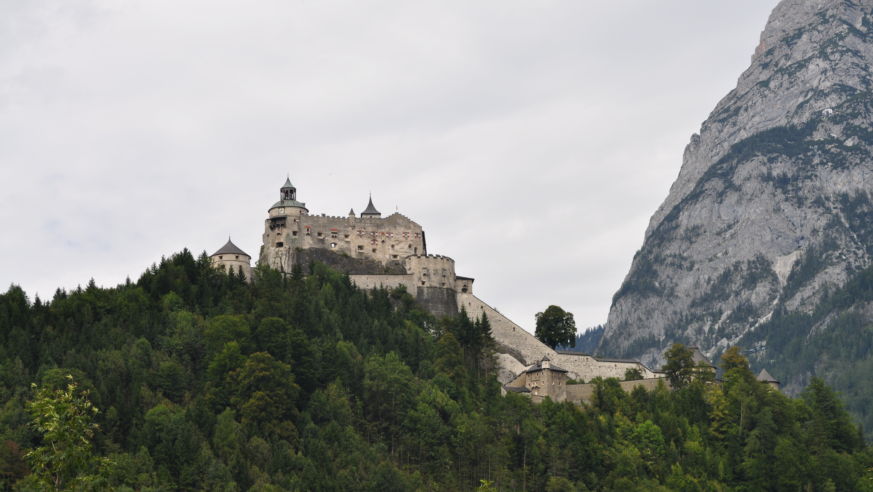 A falconry show at Hohenwerfen Castle in Austria is one of the family-oriented activities offered on the new Disney river cruises.

Starting in July and December 2016, these seven-night sailings from Vilshofen, Germany, to Budapest will call in Passau in Germany; Linz, Melk, Krems, and Vienna in Austria; and Bratislava, Slovakia.

But if you're picturing photo ops with Anna and Elsa in front of Austria's Dürnstein Castle, you have it all wrong.

Instead, the partnership will result in destination immersive activities for the whole family. One day, the line will stage an all-ages Oktoberfest celebration at a Cistercian monastery, complete with folk dancing and traditional German foods. The next day, guests can gather at Hohenwerfen Castle for a falconry show. In Salzburg, families can re-create scenes from the movie The Sound of Music which—instead of the character breakfasts you might imagine—serves as the most recognizable photo op on the sailing.

Children under four years of age are not invited, and the line suggests that—with the active and educational focus of the tours, in addition to their length—the cruise is best for children eight years and up. There is no onboard babysitting on offer, and the excursions are designed for families to explore the sites together and share the experience.

The amount of time in port will be maximized, with the vessel sailing in each morning just after breakfast and leaving, in most cases, when everyone is fast asleep. As a result, there will be several choices of excursions in every destination, in addition to the option of exploring on bicycle or just taking a ball or a Frisbee to a local park.

The food onboard will focus on local specialties, such as paprika tasting and goulash and strudel-making classes, which will help to introduce the youngest travelers to the flavors of the region. On the December sailing—in addition to German Christmas decorations and caroling—there is also the opportunity to make and decorate gingerbread houses.

And while there are a few tweaks to the 170-passenger AmaViola, still under construction, in order to accommodate the families—doors are being added to form adjoining cabins and sofas are being turned into sleepers in some suites—the existing spaces are being repurposed on these sailings. At night, the line will host teen-only dinners in a room that's usually used for wine tastings; the lounge may one night morph into a karaoke bar and become a movie theater the next and a folkloric dancing classroom before that.

The line predicts that getting to see four European countries in one week will feel like a value to multi-generational American families. But for those who want to see more on their trip, Adventures by Disney is offering a two-night extension to Prague, making the Czech Republic the fifth country in this modern take on the family-friendly European tour.

Behind the changes in airline frequent flier programs

Family forced to sit in vomit on United flight

These are the world’s best olive oils