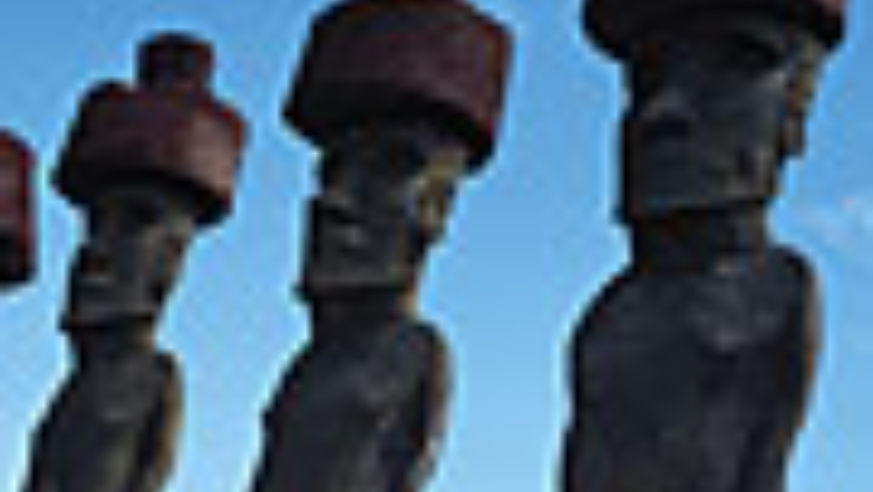 Generation after generation carved the giant stone figures,&nbsp;thought to have represented ancestor spirits.

The Rapa Nui civilization flourished for more than a millennium, then abruptly collapsed, leaving Easter Island strewn with hundreds of enormous stone statues called moai. As to how and why the moai were built and moved, or even how people came to the island in the first place, there are at least as many theories as questions.

The Probable Explanation
Rapa Nui--which is the native name for the island, its inhabitants, and their language--was most likely settled sometime after A.D. 400 by Polynesians with very impressive canoeing skills. They toiled for centuries to prop up moai around the island, apparently with the belief that the statues watched over villages in some way.

In 1722, when Dutch explorers stumbled across the island on Easter Sunday (hence the name), they found a seemingly peaceful populace. By the time Captain Cook arrived in 1774, the people had been decimated by a civil war. The sharp decline apparently occurred amid a flurry of moai construction; there are hundreds of unfinished heads, as well as dozens of fully carved statues abandoned in fields.

Intended to stand atop cut-stone altars, the moai average 13 feet high and weigh nearly 14 tons each. They were carved at quarries and then moved--probably by being placed on sleds and either rolled on logs or dragged on skids lubricated with taro and palm oil. Of the 288 figures that completed the journey, nearly all were toppled during the civil war, though since the 1950s various preservation groups have stood 35 of them back up.

The Most Impressive Moai Sites
The stone figures are located all over the island, but some spots are more significant than others. At Nau Nau, near the island's prettiest beach, each of the seven moai sports a pukao--a red, hat-like topknot--and the altar is surrounded by grazing horses. At Tongariki, 15 moai stand in a row right by the sea. Tahai, just outside the main town, has a trio of altars, with restored stone huts, and a worthwhile anthropological museum, known as MAPSE (011-56/322-551-020, museorapanui.cl, $2). There's also one moai that--in a breathtaking lapse of judgment--was spruced up with ceremonial red-and-white eyes for a French magazine's 1978 photo shoot.

Rano Raraku, the volcanic crater where the moai were created, is arguably more stunning than any of the altars: Nearly 400 figures remain half-carved in the cliffs, and dozens more lie facedown or sprout from the grassy mountainside like an army frozen in the march to the coast.

There's More Than Moai
At Orongo, a village of the so-called birdman cult has been reconstructed. The cult, which arose after the civil war, consisted of a dozen clans that each picked a hero for an annual competition. Participants swam through shark-filled waters to retrieve an egg from a sooty tern's nest; the first one back won kingship for his chief.

Getting There
Easter Island is 2,300 miles west of Chile proper, and is reached via a five-hour flight from Santiago (lanchile.com from $635). Exploring solo is feasible, considering that the island is 14 miles long and 7 miles wide, with few roads and one town (Hanga Roa), and hotels rent cars for $60 a day. Spend at least three days. Hotel Orongo is in town and has a fine restaurant (011-56/322-100-572, hotelorongo.com $78).