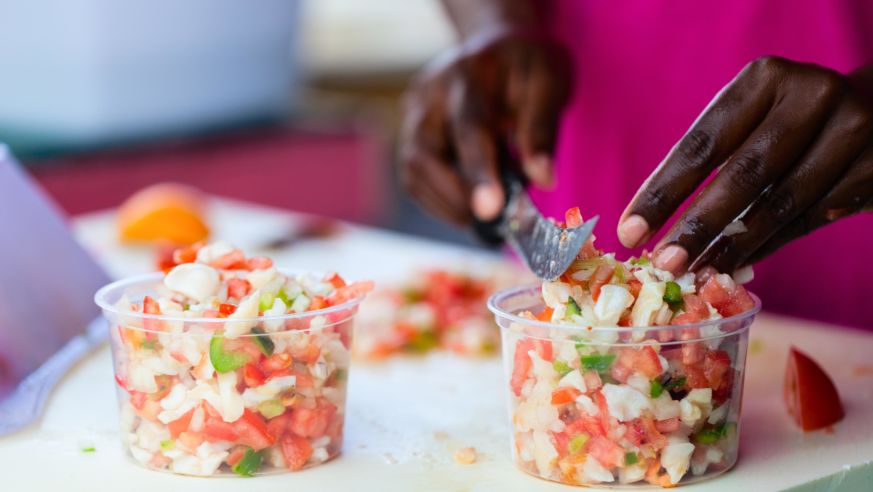 Pricey resort food? No thanks! Here's how to track down Nassau's most authentic food trucks, bakeries, and even grocery stores that dish out mouth-watering local fare.

Like other Caribbean islands that rely heavily on tourism and food imports, the Bahamas are not a cheap destination. Whether you’re on a cruise, at a resort, or even renting with Airbnb, restaurants, activities, taxis, and souvenirs add up fast. Sure, you can skip the latter, bring your own snorkeling gear, and stick to the $1.25-a-ride local jitneys to get around, but the restaurants? Expect to pay more than $25 a plate for something as mundane as shrimp over linguine—and that’s at a casual sports bar outside Nassau.

Of course, where there’s a will, there’s a way to eat cheap in the Bahamas, and you can bet that it involves local food. Here are some tips for sniffing it out in and around the pricey cruise capital of Nassau, on New Providence Island.

Track Down the Parking-Lot Vans

On weekdays, lunch vans will often park in beach lots or near souvenir shopping hubs to provide lunch for local vendors—and any savvy tourists in the vicinity. What’s a lunch van, exactly? Just what it sounds like: a car or van with a hatchback full of home-cooked Bahamian food, from curry chicken to oxtails or pork chop, depending on the day. A heaping plate with two sides—rice and peas, potato salad, coleslaw, steamed vegetables, the islands’ trademark “slice” of mac-and-cheese—will run you about $6. They are not always easy to find, as signage might not be present, so ask around. We found one called Shan’s in the lot behind the massive Mélia resort in Cable Beach, a stone’s throw from the area’s famed Daiquiri Shack. (Incidentally, the daiquiris also cost $6 apiece, if you’d rather drink your lunch!)

Visit the “Other” Fish Fry

To be clear, there is only one Fish Fry on New Providence—that colorful strip of fish and conch shacks on Arawak Cay—and it’s definitely worth a visit. But there’s no denying the more laid-back, local flavor of Potter’s Cay, which stretches underneath the bridge to Paradise Island. The “dock,” as it’s called, is lined with eateries and bars, likewise rainbow-hued, but a bit more ramshackle than on Arawak; produce stands and a fish market add to the local vibe. (Also, you’re under a giant bridge, so it feels kind of gritty and secret, despite the turquoise-water views.) Most of these places specialize in unmissable made-to-order conch salad ($12) and cheap Kalik beers, but several offer other Bahamian dishes, like chicken souse and stew conch. To get there, hop on a No. 1 jitney from downtown Nassau—and while some eateries do open for lunch, Potter’s Cay really gets going after 4pm.

Hit Up the Bakeries

Thanks to a handful of European pastry chefs who have landed in resort kitchens over the years, the Nassau area has a great little bakery scene. At both the Original Swiss Sweet Shop (locations in Cable Beach and downtown Nassau) and the Swiss Pastry Shop (Cable Beach), you’ll find some tasty and inexpensive breakfast and lunch items—Jamaican-style patties (don’t miss the conch patties; $3.75 apiece), dense johnny cakes with cheese, quiches—nestled among the cakes, custards, tarts, and Bahamian sweets. Be sure to pick up a traditional guava duff for dessert; you’ll pay a bit less here ($5) than in most restaurants.

Eat on the Road

Roadside shacks seem like common sense for inexpensive local grub, but if you don’t have a car here, it requires a bit of research. Along the No. 10 jitney route, west of Nassau between Cable Beach and Love Beach, there are a couple of worthwhile spots, including the always-hoppin’ Dino’s—home of some of the island’s best conch salads, which start at $10 a pop but can easily fill you for lunch or dinner. Cheaper than conch are the meat-and-starch meals you’ll find from food trucks like Evelyn’s, which parks daily at the very end of Potter’s Cay—try the steamed ribs or turkey for lunch ($6), or some grits and sardines for breakfast—and the roadside vendors behind Montagu beach, east of downtown.

Supermarkets around here are pretty standard, not unlike those in the U.S. (and if you’re self-catering, you’re better off buying produce and fish from outdoor markets). But some of them, like the Quality Supermarkets chain, offer a prepared-foods section where you can pick up items like rotisserie chicken, ribs, and Bahamian-style mac-and-cheese for under $10. Add a six-pack of Kalik or a $10 bottle of Ole Nassau dark rum (from a liquor store), and you’re set for the night!

This article was written by Laura Siciliano-Rosen, co-founder of food-travel website Eat Your World, a guide to regional foods and drinks in destinations around the globe.