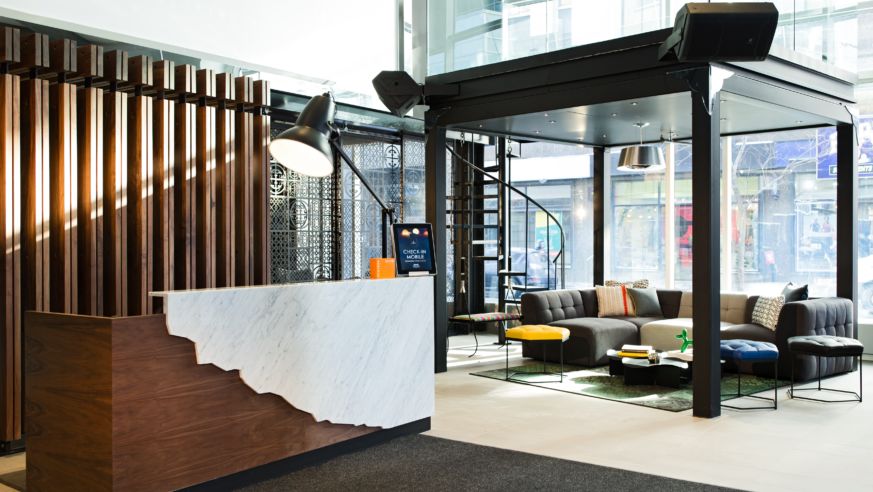 There’s no need to fly across the pond for Francophiles to get their fix—now a taste of the City of Lights can be had right here in North America. Montreal has always been an alternative to Paris when it comes to French flavors at slashed prices (that’s why we’ve celebrated it in the past), and the new Renaissance Montreal is offering quite a deal. To celebrate its debut, now through April 23, they’re offering a special discovery rate of $144, compared to the regular $210.

Located in the heart of downtown Montreal, the 142-room hotel has major perks that belie its price point. The design is an intriguing blend of art deco architecture, modern furnishings, street art by local artist Alexandre Veilleux, and contemporary art by other local artists as well, playing off of the unique aesthetic of Montreal. A DJ booth—complete with swinging benches—delivers live entertainment in style, while master mixologist Lawrence Piccard dreamed up a creative cocktail menu at East, the hotel’s contemporary Pan-Asian restaurant, located just off the lobby. And starting in April, they’ll have the bragging rights to the only rooftop terrace in downtown Montreal, when the 12th-floor oasis opens its doors to panoramic views. It also boasts a full bar, bistro kitchen, and a stainless steel plunge pool.

The deal doesn’t end when you walk out the doors—there are plenty of free things to do the in city. Here are just a few:

• Take a free walking tour of Old Town, courtesy of Free Montreal Tours, and learn all about the city’s history, architecture, culture, and more.

• Check out modern urban and street art at the Station 16 Gallery, which features new artists from around the globe.

• For a dose of history, visit Mount Royal Cemetery—one of the first rural cemeteries in North America, making it an official National Historic Site—and take a self-guided walking tour. Nature lovers should pick up the tree brochure that outlines the cemetery’s arboretum with more than 100 species of tree on 165 acres, and there are more than 145 bird species too.

• During the warm months, enjoy complimentary dance, music, and film performances at Parc Lafontaine, and in winter, it’s popular for ice skating.

• The Segal Centre for Performing Arts offers many free lectures, including its Sundays @ The Segal series.