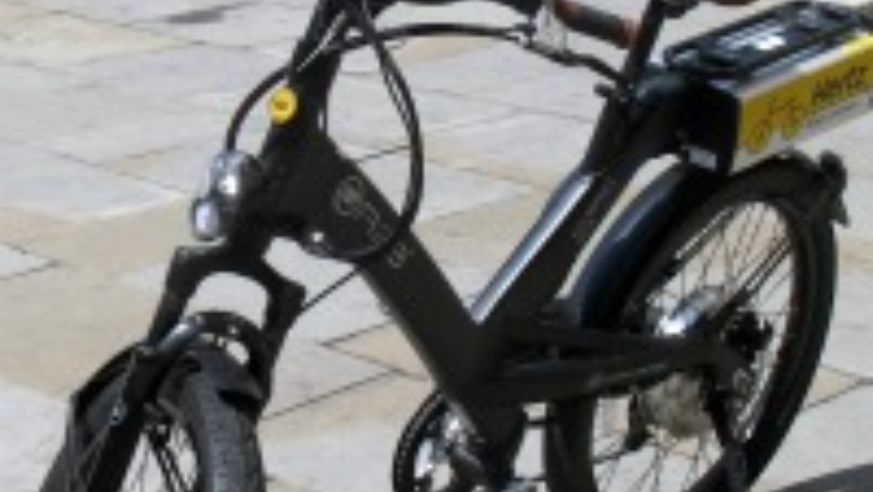 When it comes to sightseeing, it's hard to beat riding from place to place by bicycle. Add a quiet, battery-powered motor to a bicycle, however, and you can make the experience that much better. Who doesn't want to pedal without breaking a sweat while on vacation?

Riding a so-called "e-bike" feels like having a fairy godmother give you a little push from behind. The extra boost helps you cope with traffic and overtake hills with ease. Unlike a scooter, an e-bike has no noisy motor or smelly exhaust fumes.

Few Americans have ridden the battery-assisted bikes in the U.S., where they average about $1,500. Yet Americans traveling abroad are increasingly test-riding the two-wheelers, as some rental companies make them available by the day at popular destinations.

Last month in London, Hertz began renting electric bikes for £19 ($30.50) a day from its Marble Arch location. You rent the e-bike as if it were a vehicle, booking it through the Hertz website and standing in the same line as other customers. You pick up a bike, helmet, lock, and city map.

Hertz sells two types of bikes: One type still expects you to pedal, matching your effort with a boost from its motor. The other type of bike doesn't require you to pedal, allowing you to use a throttle to power the two-wheeler instead. Both types of bicycle are powered by lithium-ion batteries (similar to the ones used in many laptops). Company employees charge the batteries at night, plugging them into standard electric sockets. In this way, the batteries still slurp up juice from the grid, so they're not quite as environmentally friendly as one might first think.

Earlier this week in England's Lake District National Park, about 50 electric bikes were made available for nine special trails. Provider Electric Bicycle Network knows that their "e-bikes" remove much of the hardship of going uphill, making it pleasant for non-athletic travelers to appreciate the scenery without having to pedal heavily. The organization provides two-wheelers to local businesses, such as hotels and B&Bs, which rent them out for about £25 a day. Last month, the company began the service in England's Peak District, near Manchester. Next month, it is rolling out the battery-powered bicycles in Devon in the country's scenic southwest.

In Switzerland, travel agency Swiss Trails teamed up with the government and the Rent a Bike company to provide bike rentals along nine scenic trails, including three models of electric bike. You no longer have to be a fit cyclist to be able to tackle mountain passes and view lakes and alpine panoramas. You don't need a rental car to reach the trails, either. The e-bikes are for rent at 20 SBB train stations, which are easily reachable from the country's major cities. Sadly, the rental cost is high: 98 Swiss francs a day or about $119, though tax, helmet, and other items are covered.

In Beijing, guided e-bike tours allow you to explore the city in small groups, allowing you to cover more territory than a walking tour can alone without getting exhausted. Half-day tours from 300 CNY or about $48. Details at bjebiketours.com.

On Japan's Awajishima Island, near Osaka, more than 30 electric bicycles are available for rent as an alternative method of transport for the estimated 12 million sightseers who visit each year to see the stunning scenery. Prices start at 500 yen (about $6) for two hours. Details available at tourist offices on the island.

Figure out which hotel you'll get on Hotwire