Planning a trip to Europe? There are countless fantastic places to stay. Here are three places that caught our eye for this fall.

A rustic farmhouse has travelers running for the hills.

Córdoba and Granada are less than 60 miles away, but try not to dwell on Casa Olea’s high-profile neighbors. In this pocket of Andalucía, it’s all about the blissful isolation of the Sierra Subbéticas, an untouristed swath of rugged limestone hills and dusty olive groves. British owners Tim and Claire Murray-Walker visited over 50 farmhouses before stumbling on the ruins of this 150-year-old olive farm. Inspired by area villages, the duo turned to local carpenters to restore the six-room guesthouse’s whitewashed walls, exposed beams, and cobblestone floors. They’ve spruced the place up with “green” additions, such as solar panels and a boiler that uses leftovers from a local olive mill to heat the property. But they never let these elements intrude on traditional design: tinajas (earthenware jugs), colored-glass Granadino lights, and a dining-room table made from a trillo, a donkey-drawn threshing board once used to separate wheat from chaff. — Nicholas DeRenzo

From $139 for a double, including breakfast

A Room of One’s Own

It’s hard to believe that Priest’s House once served as a simple eat-in kitchen. The 500-year-old house in southern Kent, England, has long been something of a satellite to its glamorous neighbor: Sissinghurst Castle, home to flamboyant novelist (and Virginia Woolf paramour) Vita Sackville-West. In 1967, Sackville-West’s family passed the entire estate to Britain’s National Trust, but it wasn’t until last year that Priest’s House was opened to the public as a holiday cottage. The building is a wonderful example of Elizabethan architecture: original wood beams, glorious windows, a huge central fireplace. Its three bedrooms are designed to reflect the pastoral surroundings, with walls in soft blues, greens, and lavenders, while the Victorian antiques from Lincolnshire and the occasional touch of whimsy (a pear green claw-foot bathtub) keep it all from feeling as stodgy as the Queen’s handbag collection. And then there’s what’s outside. The surrounding landscaped grounds, among the most visited gardens in all of the U.K., close to the public each day at 5 p.m. But renters can take in the yew hedges and rose bushes for as long as they fancy. — Rachel Mosely

Luxury Across the Lagoon

A vineyard inn brings a dose of calm to Venice visitors.

Venice is always beautiful, but with all the art shows, the churches, the crowds, the gondolas, the Carnevale craziness, and the pigeons, it can be as restful as a triple espresso. At the Venissa Ristorante Ostello, you can still absorb the city’s energy—then unplug. The inn is actually located 45 minutes by vaporetto (water taxi) from the bustle of St. Mark’s Square, amid the artichoke fields and pastel villages of Mazzorbo, one of Venice’s 100-plus outlying islands. Opened last year by the prosecco-producing Bisol family in a converted 19th-century walled vineyard, the inn’s six rooms pair antique, hand-painted Venetian armoires with fanciful modern touches like jewel-tone paisley rugs and bathroom mirrors cut in the shape of songbirds. The on-site restaurant keeps it local, too, with seafood from the Adriatic, rare Alpago lamb from Veneto, and organically farmed produce such as sweet peas and wild garlic straight from the hotel’s gardens. — Nicholas DeRenzo

From $85 per double with shared bath

Book Europe Like a Local: 3 Super Sites for Reservations

For the best search results (and deals), swap your favorite U.S.-based booking site for a European counterpart. For Hotel Rooms lastminute.com While sites like Kayak and Hotwire do cover Europe, lastminute.com taps into a broader range of properties across nine European countries&mdash;with room rates up to half off. The site also features discounted day trips, spa packages, event tickets, and more. For Dining Out toptable.com Making a dinner reservation in another language (and another time zone) can be tricky. Not so with Toptable: The site books seats in thousands of restaurants across 15 European countries, and you can sort by cuisine, price, ratings, and special offers. For Rental Cars europcar.com As the largest rental-car consolidator on the Continent&mdash;with stations at 229 European airports alone&mdash;Europcar can afford to let vehicles go for as little as $32 per day. Bonus: Its no-fee membership program, called Privilege, earns drivers up to 30% off the leisure rate. MORE FROM BUDGET TRAVEL: Hotels: New App for Last-Minute Deals 6 Foreign Car-Rental Fees to Watch for on Vacation Is a restaurant reservation a firm commitment? 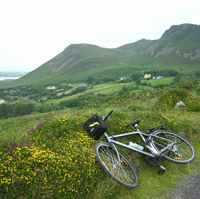 Lately, European destinations have found novel ways to make the great outdoors more accessible for their citizens&mdash;and, by extension, for visitors. Here are three recent examples of outdoorsy ingenuity. Great Western Greenway, Ireland It’s called the Emerald Isle, so why not tour it in the greenest way possible? The first 11 miles of Ireland’s longest off-road cycling and walking trail opened last year, linking the coastal towns of Newport and Mulranny; a 15-mile extension added in June runs past Rockfleet Castle, the 16th-century home of pirate queen Grace O’Malley. Bike rentals are available through Newport Bicycle. newport-bicycle.com, $17 a day. Tempelhof Park, Berlin, Germany When Tempelhof Airport closed in 2008, Berlin was left with 950 weedy acres, a 3-million-square-foot terminal, and a jumbo-jet-size question: What to do with all this space? The city chose the most surreal option: Leave it as is, and call it a park. Catch this postapocalyptic expanse of abandoned runways and planes while it’s still untouched&mdash;a beautification plan begins in 2013. visitberlin.de/spot/tempelhofer-park. Madrid Rio Project, Spain Sure, Madrid has the Prado and the King, but it’s always been a bit jealous of one piece of Barcelona real estate: the Mediterranean. At last, the capital has found a way to go coastal. Opened in April, the Madrid Rio Project is a 6.2-mile green belt along the Manzanares River, formerly cut off from the city by a highway. It’s now home to sleek footbridges, bike paths&mdash;and the city’s first beaches. esmadrid.com/madridrio. MORE FROM BUDGET TRAVEL: In Through the Outdoors How a Camp-Shy Family Came to Love the Great Outdoors 10 Best Affordable Beachfront Hotels 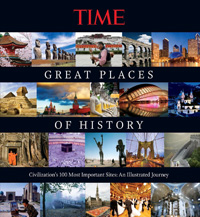 Your take: The most important historic places of the new millennium

TIME’s upcoming Great Places of History&mdash;Civilization’s 100 Most Important Sites (pre-order on Amazon.com, released October 11, $18.59) is the kind of coffee table book that will have you polishing up your bucket list and booking flights to far-flung locales. From the Great Wall of China and Easter Island to Auschwitz and Pearl Harbor, these 100 locations represent the highlights (and sometimes very lowlights) of the human experience&mdash;architectural wonders, battlefields, cathedrals, castles, universities, skyscrapers, and ancient mysteries. if (WIDGETBOX) WIDGETBOX.renderWidget('2b3157b6-29af-4c24-8e53-15f5fb1ea107');Get the Poll Creator Pro widget and many other great free widgets at Widgetbox! Not seeing a widget? (More info)What makes this list particularly interesting is its inclusion of a few newer spots (some built within the last decade) among the widely accepted classics. It may be too soon to tell if they’ll stand the test of the time, but it’s interesting to imagine that our new endeavors may eventually become the stuff of history. Here are some of the new additions that caught my eye: #74. Svalbard Global Seed Vault, Spitsbergen, Norway: A repository for seed varieties built inside a mountain in Arctic Norway in 2008, or as TIME calls it: “a Noah’s Ark for the world’s plants” #89. The City of Arts and Sciences, Valencia, Spain: A futuristic cultural complex designed by famed architect Santiago Calatrava #90. CCTV Headquarters, Beijing, China: The Rem Koolhaas&ndash;designed headquarters of China Central Television, built as a giant, cube-like loop of towers #91. Burj Khalifa, Dubai, United Arab Emirates: The tallest building in the world, at 2,716.5 feet #100. Burning Man, Black Rock Desert, Nevada: An annual gathering of countercultural artsy types in the Nevada desert that concludes with the burning of a 40-foot sculpture To these, I would add the following, which didn’t make it onto the list:Ground Zero/One World Trade Center, New York City: A symbol of America’s resilience Lower Ninth Ward, New Orleans: The worst-hit neighborhood during the Hurricane Katrina fiasco Tahrir Square, Cairo, Egypt: The site of massive revolutionary protests leading to the overthrow of President Hosni Mubarak, potentially changing the course of Middle Eastern history Spaceport America, Sierra County, New Mexico: Okay, so this one won’t technically be completed until next year, but the world’s first commercial spaceport (that means sending average Joes&mdash;with above average bank accounts&mdash;to space!) will undoubtedly represent a giant leap toward making sci-fi a reality Now it’s your turn: which sites from recent history would you add to the list? MORE FROM BUDGET TRAVEL: 10 New Global Wonders in 2011 10 Natural Wonders to See Before They Disappear 15 Places Your Kids Should See Before 15

Has your trip ever been saved by a stranger?

As all seasoned travelers know, it's the people just as much as the place that makes a trip exceptional. Whether it's a cabbie divulging the best hole-in-the-wall dim-sum joint in town or, simply, a hotel receptionist who's particularly kind after you arrive four hours later than scheduled because of flight delays, more often than not, locals are the key element that can make a good vacation fantastic. And sometimes, the people you meet don't just enhance your trip&mdash;they make it possible, a point that was proven in a recent news story. A 24-year-old woman named Catherine Li has spent the last seven months traveling by herself across America&mdash;on foot!&mdash;with little more than the clothes on her back, a direction guide printed off of Google maps, and a tent. She hauls her belongings in a shopping cart that was given to her by a sympathetic mall security guard at a Sears store in Flagstaff, Ariz. Already Li has trekked some 3,000 miles on her way to New York City&mdash;a real-life Forrest Gump!&mdash;but what makes her story really interesting, I think, is how much other people have aided her on her journey. From the concerned cop who checks in on her weekly by phone to the guy who let her crash on his couch and the mall security guard who let her take that shopping cart, countless strangers she met along the way have helped make her dream trip a reality. Watch an interview clip with Li, during her short stay in Philadelphia: All of this got us thinking: How have your trips benefited from the help of locals? We'd love to hear your stories! MORE FROM BUDGET TRAVEL: What Is the Most Memorable Place You've Ever Visited? Sightsee with Locals&mdash;for Free! 5 Surefire Ways to Offend the Locals