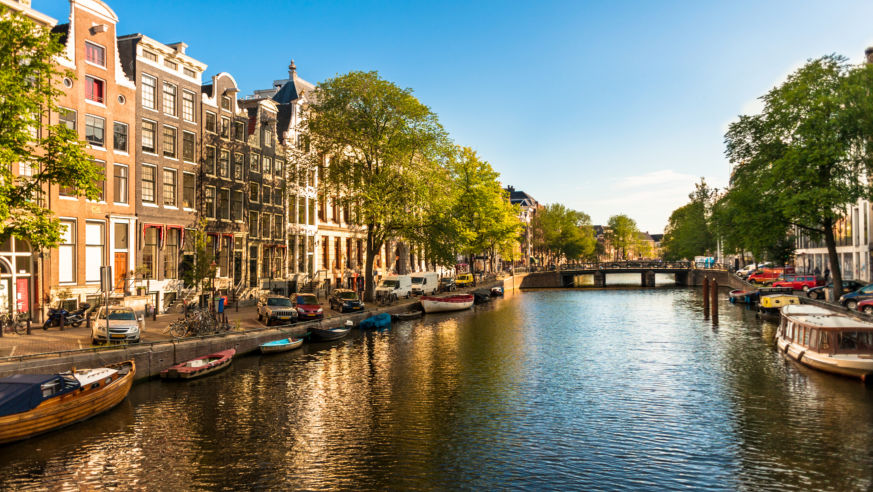 Float down an Amsterdam canal during the day, then hang out with new friends at a Generator property at night.

Dreaming about visiting Europe this year? We have good news that might encourage you to hit that "book" button, especially if you're a solo traveler. Design-focused Generator, a line of chic, affordable European hostels, is opening three new locations in Amsterdam, Stockholm, and Rome, just in time for the peak season.

Millennials especially dig this brand—with locations in trendy neighborhoods in Paris, Barcelona, Dublin, and Berlin, to name a few—and the way each property blends local culture, art, events, music, and food with interactive guest experiences, a.k.a. getting to know your fellow travelers instead of just passing them in the hallways.

Read on for details about each new location. Which will you visit first?

When it's opening: March 16

Where it's located: In the uber-hip East Amsterdam 'hood, right next to the newly renovated Oosterpark.

Cool perks: It will be the only upscale hostel in the city. Housed in an historical building built in 1908 as the University of Amsterdam’s science department, the hostel is celebrating its DNA by keeping the lecture hall and science lab aesthetics while giving the space a modern twist. The main common space, named Nescio after a famous Dutch writer, has a café with locally-sourced dishes that’s open daily for breakfast, brunch, lunch, and dinner; a day-to-night lounge that was once an auditorium, with the professor’s desk serving as the bar; and a library with shelves filled with bright orange books and wood heritage accents intact to impress Ron Burgundy.

Activities like beer tastings, coffee master classes, Vanmoof bikes, and movie screenings keep guests busy, and for those who want to splurge, there’s a luxury Sky Suite Apartment with views of Oosterpark and two bedrooms, a kitchen, living room, and TV. Later this year they’ll open an underground speakeasy bar in the former boiler room.

Where it's located: Just a five-minute walk from Drottninggatan, a must-walk street dating back to the 1600s. The pedestrian boulevard is lined with boutiques and restaurants running through downtown Stockholm. It’s also close to Central Station.

Cool perks: This is a large property, with 11 floors and 244 rooms and a lobby café that doubles as a work space. The bar and restaurant offer both Swedish and international eats. For those traveling with a group or staying longer, luxury suites are available.

Where it's located: In the heart of the Eternal City, on Via Principe Amedeo near the Mercato dell’Esquilino, the bustling market famed for its fresh international produce. The 78-room property is also close to many prime attractions, including the Roman Colosseum.

Cool perks: Mangia at the industrial-style Bistro, or take in views of the Apennine Mountains while you're perched up in the rooftop lounge, seven stories above the city.