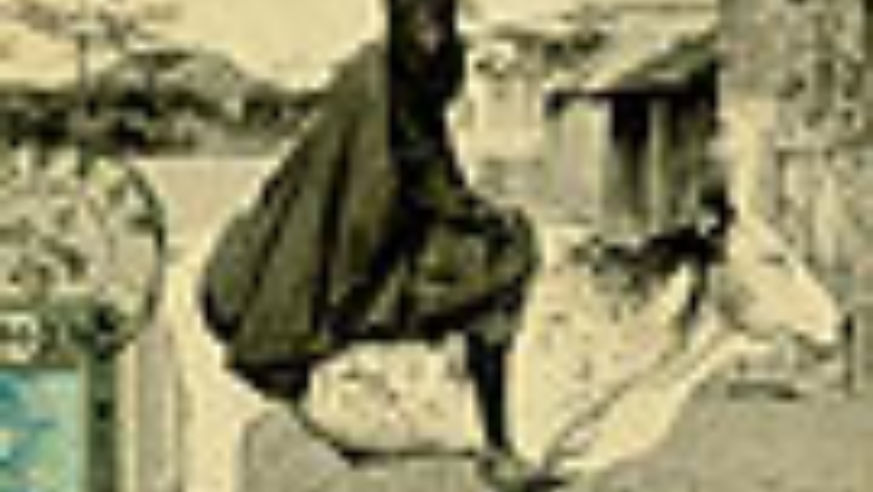 Here's an excerpt from writer Paul Theroux's introduction to "Exotic Postcards," a collection of vintage postcards from around the world.

It goes almost without saying that the exotic notion is a Western dream, initially a European hankering for the East that became more generalized geographically, and came to include an idealized North America, and then the Pacific islands and North Africa, the Near East, and the more sinuous races living among fragrant blossoms in South America.

The exotic dream, not always outlandish, is a dream of something we lack, something we crave. It may be the naked islander, or the childlike odalisque squinting from her sofa with her hands behind her head, or else a glimpse of palm trees, since the palm tree is the very emblem of the exotic. It is also the immediately recognizable charm of the unfamiliar, and so the Maori elder, the Famous Fighting Chief, Rewi Maniapoto, counts as much as the dancing girl. But always the exotic is elsewhere. The word itself implies distance, as far from the world of home and scheming as Prospero's island of magic and exile is from Milan. It is the persuasive power of travelers' tales, the record of enormous journeys of quest and discovery; the heroism of these returned travelers is the glorious note of enchantment in their stories.

It seems as natural to dream of the exotic as to dream at all. We are born with an impulse to wonder and, eventually, to yearn for the world before the Fall in which we may be the solitary Crusoe, the guiltless adventurer, the princeling with a jeweled sword. Because the dream's perfection suggests that it is unattainable, man searches for proof that it is not. And whatever fantasy one has reveals one's peculiar hunger. It might be very simple: the sunny island paradise. Or it might be complex: the oriental kingdom of silks and plumes.

However ornate or imposing the architecture, the monuments, the palaces, they are the background; in the foreground of the exotic are people. Flaubert, almost a caricature of the orientalist, with his stereotype of Araby, went to Egypt in 1849 and described the markets, the pyramids, the temples, and the Sphinx. The Sphinx cast its spell on him ("fixes us with a terrifying stare"), but shortly afterward the spell was broken ("Its eyes still seem full of life; the left side is stained by bird-droppings"). It was the people -- specifically the women -- who captivated him.

Flaubert's mission was to meet a famous courtesan named Kuchuk Hanem and watch her perform the Dance of the Bee. When some months later he met her in Esna, he had much less to say about the great temple there (six lines) than the object of his desire: "Kuchuk Hanem is a tall, splendid creature, lighter in color than an Arab...When she bends, her flesh ripples into bronze ridges. Her eyes are dark and enormous, her eyebrows black, her nostrils open and wide; heavy shoulders, full, apple-shaped breasts," and so forth for almost a whole page -- her coiffure, her jewelry, her teeth, her tattoo, even her knee caps. Shortly after meeting Kuchuk, he made love to her, which he recounted in three more purple pages, in which he included a closely observed description of the Dance of the Bee. Kuchuk performed naked, while the musicians were blindfolded, and the next day Flaubert made love to her again. So much for sightseeing in Esna.

Flaubert's friend and traveling companion, Maxime du Camp, had brought a camera with him to Egypt. He was among the first to photograph scenes of Egypt, though he only managed to take one picture of the camera-shy Flaubert.

Much of the lure of what we know of the exotic springs from photographs. In the beginning, photography was the proof that the exotic was not the confidence trick of the traveling painters or the sketchers on board the ships of discovery. What is it about a photograph that is so convincing? Perhaps, however fudged or posed, photographs possess an accidental truthfulness, resulting from the undiscriminating lens rather than the selective human eye. In some cases they may be distortions of the exotic dream, rougher bruised-looking, or plainly grubby; but many are like the dream made flesh and have an uncanny exactitude. They are representations of a complete world that is utterly different from that inhabited by people in whose dreams this exoticism was prefigured. This is the world in a dewdrop, trembling on a very odd leaf. Photographs of the exotic enlarge the meaning of the word and go on to furnish our dreams with imagery of greater undreamed-of magnificence.

Each such picture is an excitement, an invitation to the exotic and seems to repeat in its strangeness that this is a world that awaits further discovery. It holds out the promise (which is also the promise of pornography, a genre on which some of these images overlap) that you can enter this picture. Because it is a photograph it is an affirmation of truth, even though we know that photographs are capable of trickery and cheating. After its clumsy beginnings in the 1820s and 1830s photography developed swiftly and the photograph as we know it dates from the middle of the 19th century. The camera intensified the lure of the exotic and made it seem attainable.

The first postal card -- just a card for a message -- was issued in Austria in 1869. By the end of the century this artifact had evolved into the picture postcard that was briskly used in the way it is now, as a hello, an I'm-all-right signal, and frequently a boast. Because it can so easily be read by a stranger, the message on a postcard seldom contains anything intimate or important, nothing crucial, never a secret, nothing you wouldn't want the postman to see. Why do travelers send postcards? To get a rise out of the people at home -- to shock them, tempt them, one-up them. To deceive some people; to make them envious. To confirm their stereotype of The Other, to emphasize distance in a journey. Busy people send them. They are like very slow telegrams. They are a traveler's expedient, demonstrating economy of effort. The choice of card tells you something about the people who send them; and perhaps something of those who receive them.

The apotheosis of picture postcards occurred at a time when the lure of the exotic was at a peak. They were sent in great numbers and variety at the height of European colonialism, in the decades before the First World War, when Britain, France and Germany ruled half the earth. The imperial powers exploited their colonies without improving them much, putting in railways and roads only where they made it easier to export a product. Most of the indigenous people were untouched by these efforts. So the postcards here represent the pretensions of a period of idealized innocence, when few outsiders traveled to these parts of the world; when it was possible to dazzle the people at home with such images. It was not a golden age but seemed to be. And it was distant, less a world than a universe of almost inaccessible places. Scribbled on the back of one postcard here, from Noumea on New Caledonia is a reference to "Notre long voyage de 45 jours."

Reprinted by arrangement with Thames & Hudson, from Exotic Postcards: The Lure of Distant Lands by Alan Beukers. Copyright (c) 2007. Order a copy online through amazon.com or thamesandhudsonusa.com.