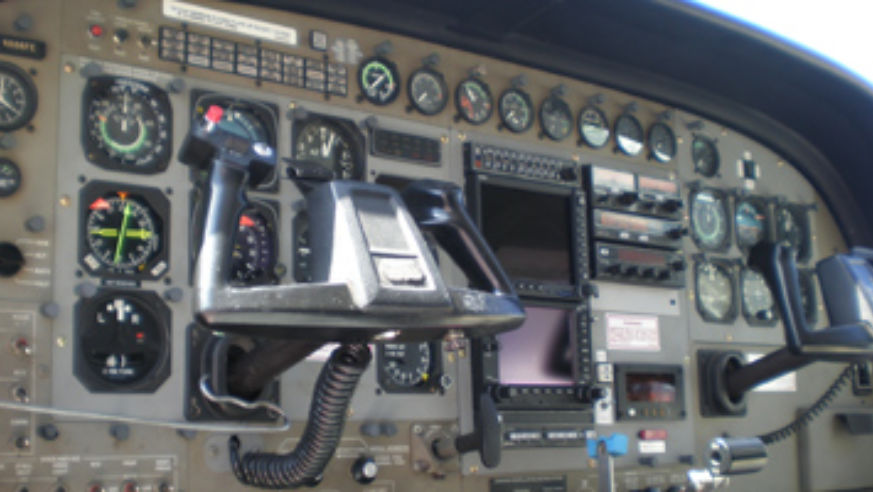 Courtesy BrokenSphere/Wikimedia Commons
A rough idea of my seat assignment on a recent flight.

While I'm certainly not immune to a little in–flight anxiety now and then, over the years I've become a pretty cool customer when it comes to air travel. (I'm not going to stop flying, after all, so what's the point in freaking out about the what ifs?) But a recent puddle–jumper flight in the Caribbean had me in completely unfamiliar territory—specifically, in the copilot seat of the nine–passenger plane. I don't mean I was merely close to the pilot, I was actually right next to him. We could have held hands. I could have easily grabbed the second steering wheel that was inches from my knees (see photo). I was borderline terrified. Even the seat belt style was foreign to me—a five–strap number with a between–the–legs harness—and I wasn't entirely sure I'd know how to open it if I needed to open my door (the handle was right there!) and bail out into the sea in the event of an emergency. But seating assignments were seating assignments—based, I believe, on balancing the weights of various passengers and their luggage—so I sucked it up. And mid–way through the flight, I actually started to enjoy it. (It helped that my traveling companion two rows back was clearly jealous of my "luck.")

Small planes, of course, are in a league of their own, but even on big commercial flights, plenty of folks can get a little panicky, in spite of the fact that the odds are in our favor as passengers: Studies estimate driving a car to be 65 times riskier than riding in an airplane*. If you fall into that anxiety–prone camp, you've got company—roughly one in six Americans experiences some fear of flying—and you might want to pick up a copy of clinical psychologist (and former flight attendant) Sandra M. Pollino's new book, Flying Fear Free: 7 Steps to Relieving Air Travel Anxiety ($14.95, New Horizon Press).

In it, Pollino takes a holistic approach to soothing in–air anxiety, starting with pinpointing where your fear comes from (for many, it's not just fear of crashes, but a nerve–racking stew of claustrophobia, social phobias, and other stressors. Then Pollino systematically addresses common worries (bird strikes, thunderstorms, turbulence), answering them with detailed nuts–and–bolts explanations of the actual dangers and how pilots and ground crew work to avoid them; she also breaks down all the disconcerting noises, shakes, and changes in pressure you might encounter in an average flight. It all gets a little nerdy at times, but Pollino believes that demystifying the experience can make a big difference. (When you learn that one kind of turbulence is caused by warm air rising from the earth on a sunny day, doesn't it seem a little less scary?) In other chapters, Pollino outlines real–world advice for choosing the right flight time, seat—even the right snacks—for a less stressful flight, and gives strategies for using breathing exercises, guided imagery, stretches, music therapy, and many more techniques (ranging from the very logical to the fairly out–there) to calm your nerves. There's pretty much a tactic for every type of traveler under the (turbulence–producing) sun.

How do you calm your nerves when you're in the air (or before you take off)? Leave your best tips in the comments section!

*based on the mileage for an average domestic flight; the results vary when measured on a per-hour or per-trip basis

6 Places Germs Breed In A Plane

Are Airlines Cracking Down On "Airplane Mode"?