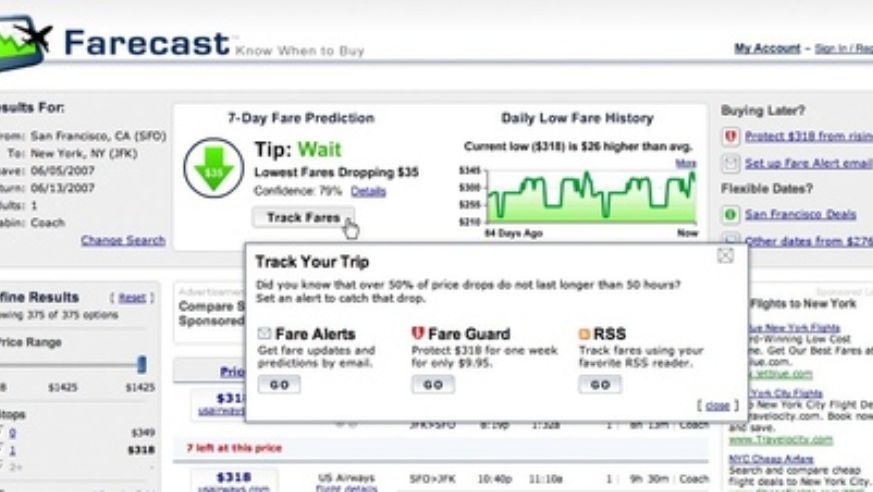 Farecast, an airfare-prediction website, came out of beta-testing today and added new features.

Farecast gives you an idea of what price is a fair value by predicting whether fares for your itinerary will rise or fall during the next week. This free online service uses a historical database of more than 175 billion airfare prices from most of the major airlines to try to crack the airfare guessing game. Currently, it predicts what prices will do for flights between 75 U.S. airports. The website also acts as an ordinary booking engine, listing the lowest fares available for your particular itinerary and allowing you to "click-through" to airline websites and purchase tickets.

Farecast recently paid an outside company, Navigant, to audit its forecasting error rate. The findings: Farecast is right about three out of four times. This winter, travelers using Farecast saved about $54 off of the cost of purchasing two tickets on average, says the website.

Here's how the service works...

Say you're shopping for a flight from Houston to Chicago departing within two weeks. After you enter the cities and dates, Farecast will fetch the lowest fares available. It'll also give a prediction. For example, "Lowest fares holding steady or rising within the next 7 days. Confidence: more than 80%. Tip: Buy."

If you're not ready to buy, a new service allows you to receive fare alerts by email. Unlike the fare alerts offered by other websites, Farecast's emails include updated predictions on whether you should purchase a fare on a particular itinerary.

Similarly, flexible travelers who have a choice of airports can quickly see which airport would be the cheapest to use as a gateway. For example, say you're choosing between flying into Chicago and you're indifferent about whether you fly into O'Hare or Midway airports. You can use Farecast to quickly see how many more dollars it will cost to fly into one airport instead of the other at a particular date and time.

Flexible travelers who are able to shift dates on either end of their itinerary will particularly like Farecast. A clever online booking calendar allows flexible travelers to choose from a range of current fares. Enter your itinerary, and you'll see, in a grid format, different fares available for departures and returns at various hours on various days.

One caveat: None of the online travel agencies or travel search players--including Farecast--have access to the fares of Southwest Airlines. But Farecast does include Southwest schedules and direct website booking links, which is a service that seems unique to Farecast.

Overall, don't consider Farecast a magic bullet. Rather, think of it as yet another tool at your disposal.