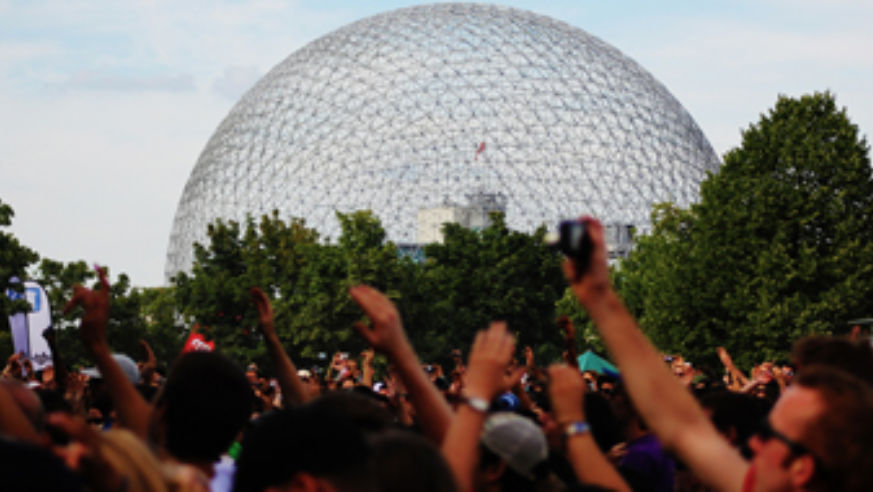 Courtesy tkaravou/Flickr
Osheaga Festival in front of the Montreal Biosphère

Summer is our favorite time to get outside, soak up the sun and take in some tunes at the same time. Fortunately, it's also high time for music festivals across North America.

To help you get a jump start on your rock 'n' roll planning, we've identified the best performances across the U.S. and Canada with an eye toward those events where tickets are still available.

The season's hottest concerts sell out fast, so if something catches your eye you'll want to book tickets sooner rather than later.

The Festival: Outside Lands.

The Price: Most of the general admission tickets have already been sold out, but the regular 3-day ticket from $199.50 still has (limited) availability.

The Background: Staged in Chicago's Grant Park, Lollapalooza has been a summer festival staple for the last 20 years. With more than 115 acres to showcase the 130+ diverse artists and bands, it's sure to pack in the fans.

The Price: The early bird special is already sold out, but the regular 3-day pass is available and starts from $215.

The Background: Burning Man hosts 48,000 people in the middle of the Nevada Desert for a week to be "part of an experimental community" where art, music, and self-expression take center stage. It is up to each participant to decide how they will contribute to this year's theme, Rites of Passage.

The Background: The inaugural Music to Know Music Festival will be staged at the East Hampton Airport over two days in August. Vampire Weekend and Bright Eyes are set to headline, and will be joined by 16 other bands.

The Background: This "festival of hip hop" has been around since 2008, and offers over nine hours of music from 40 artists on two stages.

The Background: For ten days in August, this city nestled in the Lehigh Valley will play host to famous rock 'n roll, pop, and country artists, with venues both in the historic district, and the south side SteelSacks.

The Price: Tickets start from $34.

The Festival: The Central Pennsylvania Festival of the Arts.

The Background: Known simply as Arts Fest, State College brings about 125,000 people to its downtown to celebrate art, music, and culture of central Pennsylvania. Now in its 51st year, Arts Fest has rock and roll, bluegrass, jazz, and more, as well as great family options, including "Children's Day" on the 13th.

The Price: It's free!

The Background: Since 2006, Osheaga has brought together musical artists from diverse backgrounds, both local and internationally renowned. Staged on Montreal's Parc Jean-Drapeau on Île Sainte-Hélène, Osheaga has played host to more than 70,000 music fans.

The Background: Bonnaroo is a four-day camping festival on a 700-acre farm where people are all about the music, man. Now celebrating its tenth anniversary, the acts are primarily rock and roll, but hip-hop, jazz, and electronica also play in the 100-acre entertainment village.

The Background: The two day festival combines wine-lovers, beer-lover, and music-lovers in Northwest Austin's The Domain where fans can enjoy the home-grown talent.

The Price: Tickets start from $35 for a one-day pass.

Would you pay for American's new pay-per-view movies?