Find Your Roots in Ireland 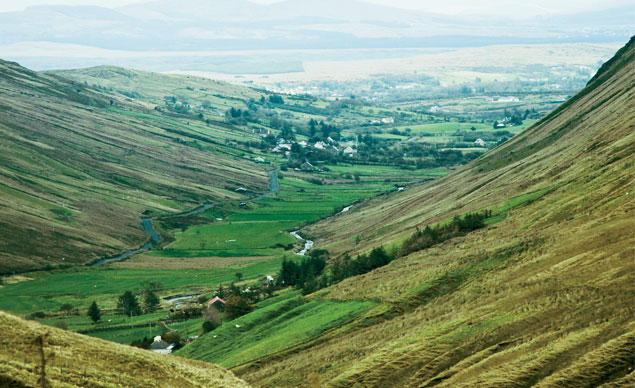 Randy Harris
When my mother and I visited Ireland, we hoped to connect with a glorious past. We discovered something almost as valuable.

We got a whiff of noble lineage on one of our first nights on the road in Ireland—only it was from someone else's bloodline. We were staying at the Ardeevin Guest House in Donegal, the jumping-off point for our branch of the Young family, whom we'd come from the States to research. Over breakfast, we met a couple from Australia, Oliver and Tasma Lofton-Brook, who'd planned a genealogy-based getaway as a retirement gift to themselves. Tasma's ancestor Anne Lutton was a ground-breaking Methodist minister born in 1791, and one of the couple's early stops on their four-week trip was the town of Moira, the Lutton family seat. They'd parked at the Moira Methodist Church one morning when parishioners just happened to be cleaning up from an event. After the Lofton-Brooks introduced themselves, the workers stopped, grabbed Tasma by the arm, and ushered her inside to the plaque that had been hung in Anne Lutton's honor. Tasma didn't expect to be so emotional—"she came expecting nothing, that was the key," Oliver said—but she really broke down when the church ladies showed her the very Bible Anne had studied and signed. "They made me feel like some kind of celebrity," said Tasma, who had been invited back to worship and have tea and cookies with the congregation on the following Sunday. My mom and I may be new to genealogy, but even we know that it doesn't get much better than holding a piece of your history in your hands.

Heritage travel is booming—an estimated 122,000 overseas visitors traced their roots in Ireland in 2009, the most recent year for which data is available—powered by shows such as NBC's Who Do You Think You Are? and the desire for travel experiences that combine history, nostalgia, and self-discovery. The demand is perhaps biggest on the Emerald Isle: One in nine Americans has an Irish heritage to explore, and baby boomers like President Obama—who downed a pint of Guinness in his great-great-great-grandfather's village of Moneygall last May—are leading the charge home. Ireland also recently released some of its only surviving census records from 1901 and 1911, giving amateur genealogists a strong starting point for an adventure that can be complicated by missing documents and misspelled family and city names.

To dig for our family, we've booked a six-night "Discover Your Roots" tour through the Aer Lingus vacation store that includes a night at Dublin's five-star Shelbourne Hotel and an hour-long consultation with Helen Kelly, the world's only official Genealogy Butler. Thankfully, Helen is more Mary Poppins than arch-eyebrowed Jeeves. She got started as a professional genealogist after tracking her own family, and her eyes fill with tears when she tells us about meeting a 105-year-old woman who remembered how Helen's grandmother had once taken some children into a field, reached into her pockets filled with candies, and thrown handfuls in the air so the kids could hunt for the sweets in the grass. This is my idea of a Genealogy Butler: a woman who combines a left-brained expertise in analyzing records with the emotional intelligence to look beyond the facts for something more. "The magic starts when you get out into the landscape, walk the roads, and connect with the community that cradled your ancestors," she says. "You just can't get a sense of place online."

As it happens, our Irish ancestry is fairly brief. The Youngs, my mother's family, blew into Ulster from Scotland in the 1600s and left for Massachusetts with the first Protestant migration in 1718, eventually establishing a dairy farm in the Berkshires that survives to this day. We've come to Helen armed with some information, courtesy of an unusually detailed Massachusetts gravestone carved by a stonecutter ancestor that reads: Here lies the interred remains of David Young, who was born in the parish of Tahbeyn, county of Donegal, and kingdom of Ireland. He departed this life, December 26, aged 94 years. (There's one glorious discovery: We've got awesome longevity genes.) Helen is ecstatic. "You're so lucky that they left you this legacy with dates on a gravestone," she says. "You're among the chosen few to get back to this early period." We've been trying to keep our expectations low, but, OK, I admit it: Secretly, I've been hoping for the kind of "this is it" epiphany that would make a reality television producer proud. Now I can't help wondering: Will we come across a long-lost cousin? Did anybody stay behind?

Helen has prepared a dossier for my mom and me, and points us to the National Library, around the corner from the Shelbourne. There, we present our list to Francis Carroll, a dapper, joke-cracking librarian. A far cry from the crotchety bibliophiles I'm accustomed to back home, Francis floats between the genealogy center and the stunning upstairs reading room, where patrons turn pages beneath a 50-foot sky-lit aqua dome ceiling decorated with molding as elaborate as a wedding cake. He gives us a refresher course in the lost art of microfilm viewing and a tip: Printouts from the machines in the genealogy center cost 15 cents instead of the reading room's 75. Like I said, Francis is a peach.

Our next stop, the National Archives, is located a few blocks away and has also been rejiggered in recent years to accommodate an increasing number of amateur genealogists. "Before, people were coming in and floundering in their research," says Paul Gorry, one of the experts on staff. So they created a room where researchers can consult with an expert like Paul for free. (The National Library offers the same service, which functions a bit like a meat counter: If it's crowded, you take a number and wait in line.) We find some Youngs in early tax records and in the Muster Rolls, a handwritten roster of able-bodied men and their weapons dating from 1630.

The next morning, after a lavish complimentary breakfast that includes a small bottle of Jameson meant to give the oatmeal a kick, we set off for Donegal. In addition to a rental car, our package includes nightly vouchers for a network of 1,000 B&Bs, which can be booked in advance or by showing up and winging it, for those unsure of where their investigations will lead.

I ride white-knuckled for the two-hour trip from Dublin to Galway as my mother gets the hang of our eco-friendly stop-start car, but eventually we start to relax and take in the fuzzy brown cows, riotous stands of hot-pink flowers, and signs for romantic real estate opportunities, including "4 acres and a derelict cottage." We redeem our first voucher in Donegal, where we meet Oliver and Tasma, then head out in the morning for some field work.

Along with searching for our own family, I wanted to know what it feels like to push off from a homeland into the unknown, so I reserved spots on a two-hour, $25 cruise out to Slieve League, the highest sea cliffs in Europe. Out on the water, the sun is shining, the boat is bumping along the top of the current, and the whole thing's feeling very sporting, like a Kennedy's Cape Cod afternoon—except for one detail that pegs us to the motherland. The white dots scattered across the sides of the precipitous peaks like cupcake toppers are, in fact, sheep grazing at an 80-degree angle. "We breed our sheep with Velcro," says Paddy Byrne, the boat's skipper, "and to have their right legs shorter than their left."

Just across the border in Omagh, Northern Ireland, the Ulster American Folk Park offers a less carefree perspective: a first-hand experience of rural life in Ireland and what it felt like to cross the Atlantic and arrive in the U.S. without cash, connections-or the faintest idea of how to cook corn, beans, and squash. A living history museum dedicated entirely to the topic of Irish-American immigration, the park is tailor-made for genealogists, with its lively historical interpreters, a life-size passenger ship where whole families would cram into a single wooden bunk for the 10-to-12-week voyage, and the specialized library at the on-site Centre for Migration Studies.

We spend the better part of an afternoon on the park's wooded paths and touring cozy 18th- and 19th-century cottages. It's one thing to study records and gravestones, but it's much more transporting to sit in front of a turf fire in a thatched roof hut from the 1700s. After the instant gratification of the Folk Park, traipsing around graveyards in County Donegal for the next few days is almost a letdown. My mom and I visit the parish listed on the gravestone, but neither of us feels chills. We do make friends along the way with a Presbyterian church clerk—himself a distant relative of our 15th president, James Buchanan—who welcomes us into his home and lets us page through the beautifully bound marriage registers with marbled endpapers that he's been entrusted with. (As pub-hopping tourists, we never would have crossed paths.) Over Irish coffees to raise our spirits (so to speak), my mom suggests we swing by another parish we came across in our research. Less than a quarter-mile from our destination, she stops to ask a farmer for directions and comes back to the car beaming. We've reached an area called Five Roads Ends. My mother grew up near a five-corner intersection in South Williamstown, Mass., that locals called Five Corners. Coincidence or synchronicity—my mother swears the farmer called this place Five Corners as well—we've found our connection across 300 years.

My mother looks around, giddy, and when we arrive at the church she peers into the windows like Nancy Drew. "This is it—they re-created what they had here in the New World," she says. In fact, this area really does look like the Berkshires, with purple mountains, rolling fields, and big, old trees—whereas most of the Irish countryside we've seen has been cleared for pasture. We may not have found any living relatives, but we've found what we were looking for—a bridge to our past. "I'm really glad we came here," she says, hugging me, "because there were moments when I thought this might be a bunch of crap." I laugh. Sure, finding a patch of earth that we feel connected to has strengthened our ties to Ireland—but also to each other.