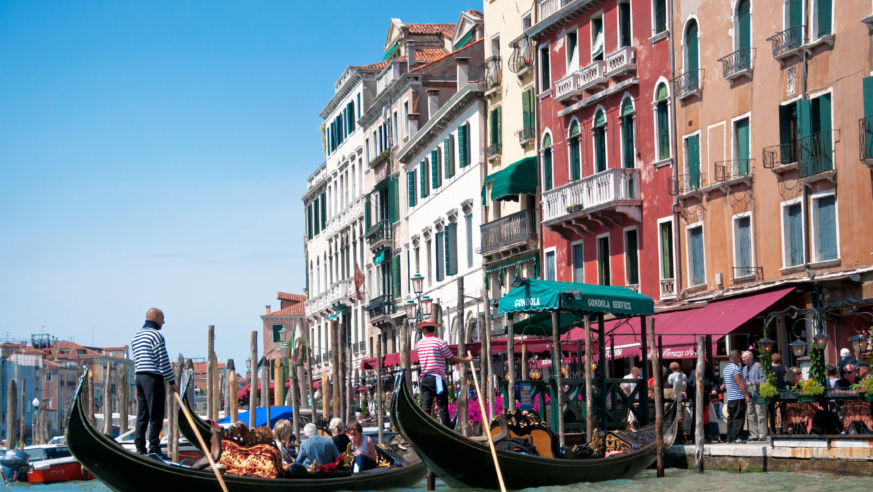 Sure, Venice is a dream trip. Just don't feed the pigeons!

Here's your cheat sheet to avoid embarrassment, fines, and even jail time when visiting other countries. From serious health and safety concerns to downright wacky old laws that barely make sense, you'll want to know each and every one of these peculiar rules.

Warning: You’ve got to add one more item to your list of travel essentials. In addition to packing like a pro, making sure your passport is up to date, and knowing your must-sees before you arrive, you should also make sure you understand the ways in which a foreign country’s laws can affect your vacation.

Relax, we don’t mean to scare you. In most cases, Americans don’t get dinged for accidentally breaking a minor foreign law, but there have been cases of fines and even jail time for some of the more serious offenses. As the saying goes, ignorance of the law is no excuse.

Some unusual foreign laws are rooted in perfectly legitimate safety and health concerns (for example, some countries are eager to micromanage your bathroom routine); others are rather odd and, in some cases, probably just strange historical stragglers that have never been taken off the books (let's just say your ability to hail a cab in London may be compromised if you're accompanied by a rabid dog). Here, a helpful (and often entertaining) look at some of the world’s strangest laws:

Don’t feed the pigeons in Venice's St. Mark’s square. If you haven’t been to Venice in a few years, this law may be a shock to you, and we’d hate to see you fined for trying to feed that iconic birds that flock to the square. While the law may seem draconian (and you may have fond memories of feathered friends landing on your head last time you visited the square), it is firmly rooted in a concern for Venice’s monuments and historic buildings: Not only is the amazing city under seige by rising ocean tides and decaying infrastructure, but pigeons' claws and droppings have been wearing away at all that beautiful old stone.

Don’t sing or dance in Rome. Whoa. What? Actually, this law applies to groups of three or more and we have no evidence of it being enforced. But in the unlikely event that you’re gung-ho to reenact scenes from Mamma Mia! in the streets of the Eternal City with two or more friends, you’ll want to ask your hotel concierge about getting a permit first.

Don’t jump in the Trevi Fountain (or any other fountain in Rome). Last summer, some late-night bathers made the news for jumping into the ornate landmark immortalized in the film Three Coins in the Fountain. But wading into any of Rome’s fountains comes with the risk of a fine. (We prefer to think of this law as "Don't be an idiot.")

Don’t eat gelato (or any other delicious Italian treat) at one of Rome’s historical sights. Boo! The slobs who dropped food, dribbled melted ice cream, littered, and in general posed a risk to Rome’s ancient marble and stone treasures have ruined it for the rest of us. We can't say we approve of this law, but do your snacking indoors or away from the historic districts.

Don’t run out of gas on the Autobahn. The actual law forbids drivers from stopping on the highway that’s legendary for high speeds. To avoid a fine, make sure you gas up before hitting the road.

SPAIN SAYS NO TO FLIP-FLOPS AND SPITTING

Don’t wear flip-flops when driving. You know, this one makes sense for drivers everywhere, doesn’t it? If you’ve ever tripped out of your flip-flops, imagine what it would be like to lose control of your feet while putting the pedal to the metal.

Don’t spit in Barcelona. Another example of Spanish ingenuity: Dude, don’t spit anywhere in the world!

GREECE REGULATES YOUR CHOICE OF FOOTWEAR

Don’t wear high heels at archeological sites. The amount of pressure that just one pair of pumps exerts on ancient stone and marble is significant; multiply it by endless visitors over the decades and sites like the Acropolis have got themselves a problem. Just one more reason to pack your comfy shoes for seeing the sites.

SINGAPORE'S LAWS ASSUME YOU ARE A CHILD

Don’t chew gum. Yup, this law is fairly well known because it has been enforced to the chagrin of visiting Americans. Just pretend you’re back in second grade. No gum allowed.

You must flush the public toilet. Um... of course we will.

Don’t eat during Ramadan. It’s a revelation to non-Muslim visitors that they are expected to fast during Ramadan; failing to do so can result in a fine.

PORTUGAL: WHAT THEY DON'T KNOW CAN'T HURT THEM

Don’t pee in the ocean in Portugal.Psst! We have absolutely no idea how they enforce this law.

Don’t place a postage stamp with the queen’s likeness upside down. Sure, your inner punk rocker may relish the idea, but if you get caught for playing Johnny Rotten, you may get fined.

Don’t hail a cab in London if you have the plague. That's right. And while you’re at it, don’t be asking the cabbie to carry a rabid dog or a corpse either, which are also illegal. We’re pretty sure these oddly specific laws date back to past centuries when the city was notoriously filthy and overcrowded and Londoners (and, presumably, their dogs) were shuffling off this mortal coil at an alarming rate. But, just the same, consider yourself warned.

Don’t insult the king of Thailand or members of the royal family. That includes stepping on Thai baht currency, which bears the king’s image. Even foreigners have done jail time for this offense.

DENMARK WANTS TO SEE YOUR FACE

Don’t wear a mask. A surprise to many Americans: Leave your Halloween costumes, Yoda heads, and festive-not-festive Guy Fawkes masks at home when visiting Denmark.