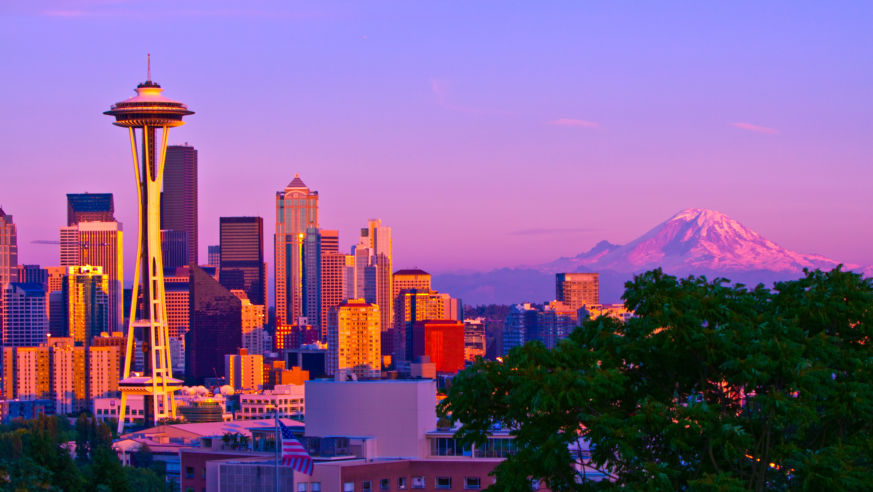 The Seattle skyline at sunset is a gorgeous perk of visiting the Emerald City.

There’s plenty of reasons to love the Emerald City. Some cost money, others are fabulously free.

Seattle can be expensive. Look in the right places, though, and there are still plenty of free ways to spend time in Emerald City without spending a penny.

Touristy, but justifiably so, Pike Place Market is one of Seattle’s top sights and absolutely free – except for the money you’ll be tempted to spend here. The range of stalls, from fishmongers and florists to food, demonstrates the Port of Seattle’s importance and why it became such a valuable jewel in the Pacific Northwest’s crown. Any day of the year this is a great place to shop and people-watch.

Waterfall Garden Park was one of Seattle’s first small ‘parklets’ or ‘pocket parks.’ Tucked quietly into the Pioneer Square neighborhood, it has a 22ft waterfall and is a great spot to take a break during a busy day of sightseeing.

In addition to free admission and parking, Frye Art Museum provides complimentary tours throughout the week. On your own or with a guide, explore the rotating collections of 19th- and 20th-century American, French, and German paintings and sculptures.

The Space Needle isn’t the only large-scale metal construction in the city; Olympic Sculpture Park, managed by the Seattle Art Museum, is home to over a dozen large artworks, with access free and open to the public every day from dawn until dusk. From the sweeping red Eagle to the unusual Echo, this is a great place to partake of Seattle’s art-loving culture.

The Hiram M. Chittenden Locks, more commonly known as the Ballard Locks, are more than just an effective link for ships moving between Puget Sound and lakes Union and Washington. In addition to watching the parade of boats using the locks to traverse the waterways, another popular activity is sea-life spotting at the fish ladder section of the locks.

The first Wednesday of every month, the Sorrento Hotel turns their Fireside Room into a social-yet-quiet literary occasion, when a mix of people claim the couches and armchairs to consume great written work. Everyone is welcome but the event is popular, so it’s worth putting a standing event on your calendar so you don’t forget to turn up early and snag a spot.

Covering 534 acres near the Magnolia neighborhood, Discovery Park provides a variety of terrains for those wanting a bit of outdoor time in the heart of the city. Choose between forested trails, the rocky beach and exploring the West Point Lighthouse – as far west as you can be within the city limits. All are free and beautifully preserved by the city for your enjoyment.

Throughout the summer months, Seattle’s neighborhoods take turns opening their gallery doors for the artistic-minded to explore at will. Pioneer Square galleries open the first Thursday, Belltown hosts on the second Friday each month and Capitol Hill’s event is on the second Thursday. In addition to free gallery access, many local businesses hold daily specials for these nights, making them perfect for a cheap evening out.

The Ladies Musical Club exists to further interest in classical music in Seattle through free performances throughout the city. From West Seattle to Wallingford, this women-only group selects and produces a variety of classical music styles, staging shows in smaller, community venues.

10. Get the locals’ view of the skyline

There are far cheaper ways to take in the Seattle skyline than by forking out for the Space Needle. Enjoy the view over Lake Union from Gas Works Park while families and dogs frolic on the grassy hills, or contemplate the free but priceless panorama of the entire skyline (Space Needle included) from Kerry Park on Queen Anne Hill.

On the first and third Monday of every month, the mics at Hugo Houseare open to any and all writers in the city through an event called Works in Progress. Listeners are also welcome, though we’ve heard that the stories are not necessarily family friendly – it is a public open mic night after all!

12. Get some free exercise

With the great outdoors on their doorstep it’s no surprise that Seattleites love their exercise, and there are plenty of ways to get some – many of them free. If you need somewhere to get back in cycling shape, try a few circuits on the Green Lake Park 2.8mi loop; while runners should head for Myrtle Edwards Park and hit the paths along the shores of Elliot Bay.

13. Get cultural at the Seattle Center

Nearly every weekend of the year, the Seattle Center plays host to a variety of events, including many cultural festivals collectively known as Festál. From the Irish Festival in March to the Polish Festival in July and CroatiaFest in October, you can immerse yourself in ethnic food, dance, and celebration, all without spending a dime on admission.

14. Watch the sunset or light your own fire

Pyromaniacs can indulge their fiery tendencies in Golden Gardens Park, one of the few public parks that allows open fires (in designated areas). The park also provides one of the best views for sunsets on those days where Seattle is graced with a cloudless sky. The only thing you’ll spend is time deciding on your favorite location to enjoy the moment.