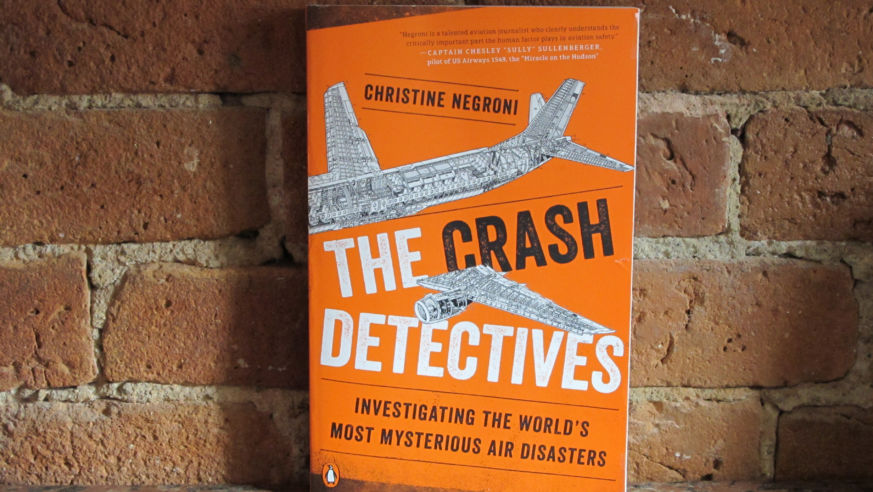 In "The Crash Detectives," journalist Christine Negroni examines some of history's landmark airline disasters and what we can learn from them

Who doesn’t love a good mystery? Speculation on crop circles, what went on in Roswell that night in 1964, and where Jimmy Hoffa and Amelia Earhart vanished to still occupy the collective mind all these decades later. Arguably one of the greatest mysteries of our present moment is what happened to Malaysia Airlines Flight 370, the airliner that fell disappeared on March 8, 2014 and is believed to be in the Indian Ocean. Terrorism? Technical malfunction?

Those questions dogged Christine Negroni, a longtime aviation reporter for media outlets ranging from ABC News and The New York Times to Air & Space magazine. She covered the disappearance of MH 370 for ABC News. She weaves the findings of her intense inquiry and study together in the “The Crash Detectives: Investigating the World’s Most Mysterious Air Disasters,” which was released by Penguin in September.

Part of what makes the book such a thrilling read is that it broaches technical engineering factors, but not too technically; she takes you into the quick-thinking minds of pilots and investigators, but not in a cheap-thrills way; she details high-profile disasters, but not in a sensational way; she takes a probing look at conspiracy theories and gives them rational consideration without, for lack of a better term, coming across as paranoid.

We caught up with Negroni to talk about air travel, investigative reporting, government agencies, conspiracy theories, and what it’s like to experience oxygen deprivation.

BUDGET TRAVEL: One of the things that makes this such a gripping read is that in addition to giving us the nitty gritty details of the Malaysia Airlines Flight 370 incident, you essentially chronicle a whole evolution of aviation engineering and progress. Was that your intention?

CHRISTINE NEGRONI: I thought the book would be focused on Malaysia Airlines Flight 370, but as I wrote it, various avenues would lead to other things. MH370 inspired larger questions, it raised all these conspiracy theories but in some cases, there are legitimate alternative theories. That was eye-opening for me. And I’ve been an aviation safety writer for 20 years.

BT: Can you tell me an example of something that was particularly eye-opening that you learned?

CN: I think it was about the National Transportation Safety Board, for one. They’re the geeks who show up and solve the mystery when US airlines or aircraft are involved in a disaster. The more I looked at other crashes, the more I realized the NTSB investigators were subject to the same political and economic pressure as other bureaucrats and investigators in other countries. They’re not always the heroes They might misconstrue the facts. That’s surprising and disappointing. It felt like, “Christine, smell the coffee! Why should the NTSB be different from any other agency?”

BT: In this day and age, emotions can run pretty high when it comes to air travel. People who’ve never feared flying might be worried about getting on a plane given all the threats. And the stress around all the rigamarole of checking in and going though security doesn’t help. When people hear about a book on airline crashes, it might unnerve them, but “The Crash Detectives” has plenty of positive takeaway. Can you explain the beneficial takeaway of the book?

CN: The point is you can learn from each accident and if you don’t learn, why do it? A disaster is really a lesson, we can learn from, that’s why investigate in the first place. What near-accidents show us, like with Sully Sullenberger and the "Miracle on the Hudson flight," is that people can save the day, they can do what machines cannot do. They can do something novel and be innovative. Sully is just one of many who’ve done this sometimes in dramatic ways, and sometimes in subtle ways that even they may not even know. The end of the book is sort of a testament to how, by learning from mistakes, we can excel and not just in aviation, but in the way we perform in all sorts of ways.

BT: You say that MH370 and the Miracle on the Hudson flight are yin and yang. What do you mean by that?

CN: In MH370 and the “Miracle on Hudson,” the accidents are the opposite, In MH370—if my scenario is correct, and the crew did in fact suffer hypoxia, they were unable to make intelligent decisions--there was no human controlling the plane that could fly. On the other hand, Sully had a plane that couldn't fly, so this was a case of humans stepping in and using their intellect to save the day.

BT: One of the interesting things to me about covering aviation versus another hard news realm, like technology or politics or the economy, is that it’s a huge industry, but each and every individual flight can physically affect each person differently, and in some cases that’s what accounts for an accident. You’ve made an effort to do really immersive research. Can you talk about some of your experiences?

CN: I went to flight school with Lufthansa pilot cadets. I did flight training at a private air school in New Zealand and I went through flight attendant training with Emirates in Dubai. I did hypoxia training with the pilot cadets from EVA, the airline of Taiwan. We did altitude training at 25,000 feet to familiarize ourselves with the symptoms of hypoxia, oxygen starvation. Hypoxia is sometimes called the "happy death" Because it makes you feel drunk and very happy, silly, stupid, a feeling of well-being.

BT: When I board a plane, it feels like I’m putting all my trust in the hands of the captain. A lot of people board an airplane and feel really helpless

CN: Every time there's an accident there's so much misinformation on television. It’s a joke, if it were not a disaster, it would be laughable. Pilots and lawyers do a lot of this. Pilots may know how to fly a plane, but they don’t know safety necessarily. It is also important that passengers recognize their own role in safety. There are very common sense things travelers can do. The most super-powered executive will get on a plane and surrenders. Maybe the airlines encourage it will all the rules, but it’s like for most passengers, their free will has been beaten out of them. If something unexpected happens, the dynamic is that everyone gets passive, they’re not sure what to do or how to act. But you’ve got to own your own safety, you’ve got to be able to respond if something happens. Passengers should start by listening to what the flight attendants tell you to do. Count the number of seats there are to the closest exit, and don’t leave things on the floor so that the person next to you will trip if they have to get out in an emergency.

BT: Despite all the horrific details of the headline-making disasters, it’s still pretty incredible to think about the many thousands of flights that take off and land around the planet every day. It never ceases to amaze me that we can travel halfway around planet Earth in 14 or 16 hours.

CN: The fact is that there's more risk riding a bicycle in New York City than flying to New Zealand. There are 100,000 flights a day worldwide. Flying is amazing. I wish people would look out the window and see how gorgeous it is out there. They can see shooting stars sometimes and the moon. The other day I took picture of a sunset from a plane, it was so beautiful, I almost cried. People climb mountains to see that kind of sunset. But we get on a plane and look at our devices or movies or whatever. I wish everyone would enjoy that special gift that is flying.