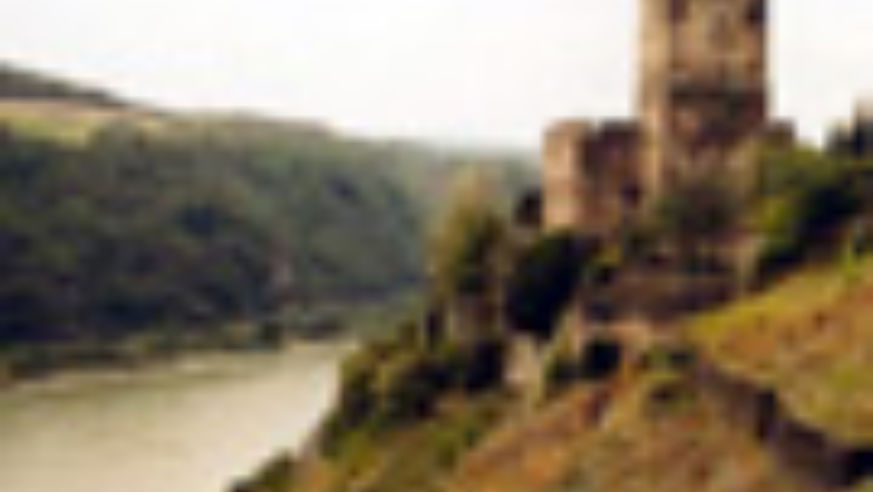 In Germany, a number of genuine castles--turrets, hidden passages, the whole deal--are more than just romantic backdrops. They're hotels, too. This is a knight that you'll never forget.

The Colmberg ranks as one of the Franconia region's best full-on medieval castle experiences; it sits prominently atop a 1,676-foot peak and has tall, impregnable walls and a courtyard flanked by a round stone tower. Ivy crawls up the faded peach plaster on one of the complex's giant, half-timbered buildings, and here and there the masonry is flecked with wildflowers. The interior is a maze, with short stairwells, tiny chapels, book-lined sitting nooks, and twisting hallways crammed with antiques. Around every turn you'll find thick dark beams, low arches, imposing staircases, iron candelabras, fires crackling in stone fireplaces that face giant leather chairs, and stuffed stags, brown bears, ermine, boars, and hawks.

The Colmberg sees its share of daytime tourists, busloads of whom detour off the nearby Romantic Road, the popular, 200-mile byway that snakes through medieval villages and scenic countryside between Würzburg and the Bavarian Alps. Things quiet down substantially at night. Each room is different--one has a Japanese canopy bed, another has modern furniture with a vaguely art nouveau influence. The Honeymoon Suite has over-the-top rococo decor, with gauzy curtains, wrought-iron filigree, and other ornate details. One of the nicest rooms, with a sleigh bed, stone walls, and deep-set windows, is named Schöne Else after the wife of a local burgrave, a relative of Friedrich VI--who ruled the Brandenburg Mark, which later became the core of the Prussian Empire. Colmberg (near Rothenburg ob der Tauber), 011-49/9803-91-920, burg-colmberg.de, from $95.

"Along the Rhine, there are castles in every corner," says Wilma Bartsch-Reichelt, owner of the 13th-century Gutenfels. "But I do not run a public restaurant. I do not give tours. My castle is a home, and only guests are allowed in." The ban on tour buses gives Gutenfels an exclusive, peaceful feel.

The castle was largely rebuilt from ruins between 1888 and 1954, and the wood-paneled walls sometimes recall a 1960s basement den. Still, the rooms, which are named for different Rhineland noblemen and women, come with faded Oriental runners, creaky wood floors, leaded-glass windows, and curtains hanging over the heads of the beds--details that add a bit of medieval-style class. Many rooms have trundle beds or odd bunk beds set into the walls--like extra-wide berths on an old train's sleeping car--making the castle a great option for families. The dining room fits the bill of a bona fide baronial hall, with a pair of enormous stone fireplaces dating back to 1200, a beamed ceiling, chandeliers, and a contemporary, cartoonish mural of medieval scenes.

In the gorgeous main courtyard, a flagstone terrace is adorned with little statues. Above the terrace, two levels of wooden balconies are dripping with potted red geraniums. The grounds are full of fabulous gardens, including a sunken area that is flanked by turrets just inside the outer wall. There's a small table in one turret that's perfect for an afternoon picnic. The view looks over one of the Rhine's most photogenic spots: an island in the middle of the river sprouting the little baroque tower of Pfalzgrafenstein Castle. Kaub (near Wiesbaden), 011-49/6774-220, rhinecastles.com/hotel-burg-gutenfels, from $145.

Owner Christa Probst is likely to greet Americans with an amazed, "How ever did you find us?" The Eifel region, west of the Rhine and southwest of Bonn, with its rolling farmland and strings of tiny, round lakes filling ancient volcanic craters, is a popular escape among German weekend motorcyclists and countryside trekkers. The closest that foreigners explore is generally the castle-lined Mosel River valley.

There's been a burg, or fortress, in the center of the village of Daun since the Celtic era. It's been destroyed and rebuilt several times over the past 2,700 years. The current, A.D. 1712 incarnation--creamy yellow walls with wooden doorways, a gabled roof of mossy slate tiles peppered with tiny dormer windows--has been welcoming guests for 22 years. The interiors have for the most part been modernized, and the rooms are spacious and classy, with easy chairs and headboards upholstered in richly colored tapestries, and Oriental rugs scattered over parquet floors. Bathrooms are sleek and large. Some rooms, like No. 124, are marvelously crisscrossed by wood beams, which cut down on the usable space but create a highly atmospheric effect. Rooms on the second floor (which Americans would call the third floor) tend to be smaller, many with modular, white-lacquer furnishings and cream-colored duvets. If the tasty but rather pricey restaurant is too rich for your pocketbook, walk down the drive and turn right onto the town's main drag. At the end of the block is the Rengener Stübchen, a cozy bierstube and restaurant serving simple dishes and grilled meats. Daun ( just north of the Mosel Valley), 011-49/6592-9250, daunerburg.de, from $160.

Construction on the Hirschhorn first started around 1200. The work continued for centuries, and the castle slowly rambled its way up the steep, forested banks of the Neckar River until 1632, when Friedrich, last of the Knights of Hirschhorn, died. Legend holds that the Knights' reign ended because Friedrich had been cursed by the mother of his cousin, whom Friedrich killed in a duel. The fact that a plague rolled through town in 1635 and left fewer than 25 residents alive apparently wasn't taken into consideration.

Today, the castle's crumbling walls extend from high ramparts down into the red roofs of the village below. The calls of sparrow hawks mingle with the distant rush of the Neckar. The Oberrauner family, which manages the huge castle complex, lives in the building over the main gate. Margret runs the reception desk, while husband Josef is in charge of the kitchen. The eight rooms in the main castle building have better river views and a bit more character--cherry-stained furniture, gauzy curtains pinnacled over the headboards, and subtle designs carved into the stone windowsills--than the 17 largely modern rooms in the Marstall, the quaint old stable down the hill. Most guests spend their time ensconced with a mug of beer or glass of Riesling on the dining terrace, which juts from the main building like the prow of a ship, providing amazing views up the swift river. Hirschhorn (between Würzburg and Mannheim), 011-49/6272-92-090, castle-hotel.de, from $132.

In a suburb just across the Rhine from downtown Bonn, a city with a population of more than 300,000, the Kommende Ramersdorf is surrounded by a thick forest, adding that crucial fairy-tale barrier from the outside world. At the end of a short drive, the woods open up to reveal a mishmash of Renaissance turrets and baroque spires, the result of the castle's late-19th-century remodeling. Past the gatehouse, the grassy grounds are dotted with a stone bench under a tree here, a stone sculpture there. Stretching back from the castle is a long, U-shaped brick building--the former stable--with a French restaurant downstairs and a second story converted into guest quarters. Antiques in rooms have lovely carved or inlaid details. The tiny windows don't let in much light, making large and bright room No. 1 the best of the bunch. The aging baths are a bit stodgy, though perfectly serviceable. The main part of the castle--a warren of rooms maintained in a kind of dusty splendor--hosts conferences and serves as a display for antique furniture (mostly Biedermeier) and artwork up for sale. One drawback: A busy road runs past the property, and though guests can't see the road from the castle, there is a distant hum of traffic much of the day. Thankfully, the noise disappears by late evening. Oberkasseler Strasse 10, Bonn Ramersdorf (across from Bonn), schlosshotel-kommende-ramersdorf.de, 011-49/228-440-736, from $110.

Staying at Liebenstein feels a bit like you've been invited to your eccentric Uncle Günther's ramshackle country castle. The grounds are a glorious mess of romantically crumbling stone walls, ramparts, towers, and gateways. One steep-roofed building slumps against a central stone tower. Low ceilings and cramped spiral staircases keep guests hunched over, and everything--doorways, steps, floors, and hallways--is slightly askew. Kids will love hunting for ghosts and discovering hidden passages. The Gothic-arch motifs set into dark wood furnishings are painted bright blue and red. Random suits of armor and crossed swords decorate the stucco walls of the restaurant, which offers sweeping Rhine views and schnitzel-and-sausage cuisine. The breakfast-room windows also take in the river, past a foreground of trees, broken walls, and the white tower of Sterrenberg, the "enemy brother" castle next door. The lore holds that, back in the late Middle Ages, Liebenstein was built for the younger of two brothers whose feud over a woman split the Sterrenberg line forever. Kamp-Bornhofen (near Koblenz), 011-49/6773-251, castle-liebenstein.com, from $105.

The 1,100-year-old Veldenstein is owned by the state of Bavaria. The giant Kaiser brewery occupies a quarter of the little pastel-housed village in the valley below the castle walls. Appropriately, the local brew goes well with the castle's hearty German food, served on warmer days at outdoor picnic benches. During meals Oliver and Katrin Betzelt, who've managed the property since 1988, joke with guests and take turns chasing out the black spaniel and bobtailed cat that sneak in to beg for scraps.

Veldenstein doesn't have the fanciest of interiors. Most of the rooms directly beneath the peaked red roof are rather bland. Some rooms on the floor below have a bit more style--half-tester beds with fabric draped above the heads or, even better, a canopy bed surrounded by wood furnishings. A stay here is all about the simple pleasures of small-town life--climbing the tower for panoramic views or meandering along the weed-choked ramparts to sit on an old soldier's bench and watch fishermen work the lazy bends of the Pegnitz River. Burgstrasse 12, Neuhaus auf der Pegnitz (east of Nürnberg), 011-49/9156-633, burghotel-veldenstein.de, from $65.

High in the hills above the city of Coburg, several miles down a twisting country lane from the village of Haarth, lies the Hohenstein, a Renaissance castle completely rebuilt after its 14th-century incarnation was burned to the foundations during the farmer revolt of 1525. After World War II the castle served as a retirement home for (extremely lucky) postal workers, and in the early 1990s the Hohenstein was converted into a hotel. A long gravel driveway curls to a wide stone staircase and the guard tower's gargantuan front door, surrounded by ivy. A friendly black-and-white cat named Susi greets arrivals and follows whoever pays her the most attention to their room, to try to cadge a spot on the bed for the evening. Past the guard tower lies a courtyard that's a study in different types of German castle architecture: a mélange of half-timbered walls, craggy medieval towers, wrought-iron lamps, flying staircases, gutter spouts sculpted into dragons' heads, and baroque stonework. The only sight that somewhat spoils the mood is the modern glassed-in porch of the restaurant, a popular spot for locals celebrating special occasions. The restaurant's chefs, Michael Kötterl and Stefan Wandt, prepare gourmet German and French cuisine that matches the royal surroundings.

The 13 guest rooms are scattered throughout the complex, and each is unique. A few, including the Lichtenstein Suite, are riots of gilded rococo stuccowork and crystal chandeliers. A favorite is the Freiherrenzimmer, a sizable chamber with a high wood-beamed ceiling, plank floors, and 17th-century windows set with painted glass medallions. The extensive wooded grounds, laid out in the 18th century in a Romantic style, are littered with mossy low ramparts, tumbledown outbuildings, and lichen-spotted statues. Hohenstein (outside Coburg, north of Würzburg), 011-49/9565-949-494, schloss-hohenstein.de, from $142.