Get your French on for Bastille Day 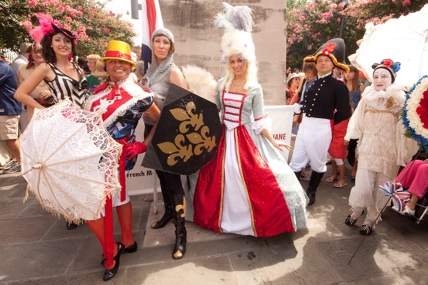 You don't necessarily have to board a transatlantic flight to get your Francophile fix for Bastille Day.

July 14, France's Independence Day, has become just as much of an excuse for us to indulge in all things French — baguettes and brie, champagne and wine, Serge Gainsbourg and Edith Piaf, anyone? — on this side of the pond as it has in France.

In fact, the French government is encouraging it with the launch this year of Destination France Day, a new annual tradition aimed at positioning Bastille Day as a worldwide event to celebrate France as a travel destination. For its kick-off year, parties are being hosted in Paris, New York and Shanghai, with guests in New York encouraged to wear something blue, those in Paris wearing white and in Shanghai, red (in honor of the French flag).

The soirée bleue in New York will feature a blue-themed fashion show and live musical performances at the Hudson Terrace. The soirée blanche in Paris will take place at a private apartment with views of the Eiffel Tower and the Bastille Day fireworks. And, in Shanghai at the House of Roosevelt, the soirée rouge will feature a French-themed photo exhibit and performances. For more information about Desination France Day, contact the French Government Tourist Office.

But there are other ways to celebrate your inner monsieur or mademoiselle closer to home. Bastille Day has become an annual custom in many cities across the U.S. There is the Bastille Day Los Angeles Festival on July 17, and Bastille Day on 60th Street in New York on July 10. Chicagoans celebrate with a Bastille Day 5K & 8K Run, Walk and Block Party.

And if you want a replica of the real thing, why not head to Paris Las Vegas? Or, perhaps pack up the car and head north to the French-speaking Canadian cities of Montreal or Quebec City. Or, if all this talk of France has inspired you, try your luck with Air France's late summer sale. Pourquoi pas?

This summer, travel with your little one—and your sanity

The International Olympic Committee this week selected PyeongChang, South Korea to host the 2018 Olympic Winter Games, a decision that will put the Asian peninsula nation in the spotlight in the coming years &mdash; something South Korea desperately wants. In recent years, South Korea has been pushing to market itself as a viable vacation destination, but it has had challenges, namely that it shares a peninsula with the sometimes hostile North Korea, and competes with China, Japan and Southeast Asia for travelers' attention. But this announcement could help South Korea drum up the kind of attention and excitement that might help the country emerge from the shadows of its neighbors. PyeongChang, a mountain region in northeastern South Korea, beat out Munich, Germany and Annecy, France, for the Winter Olympics (PyeongChang got 63 votes, Munich 25, and Annecy got seven). And VisitKorea, the country's tourism marketing organization, is already touting Pyeongchang as the "Alps of Korea" (interesting considering that Annecy is in the actual Alps), home to several ski resorts and parks. The decision was in fact a major coup for South Korea, which had already bid for the Winter Games twice, once eight years ago, when it lost to Vancouver, Canada, which hosted the 2010 Winter Olympics, and again four years ago, when it was announced that Sochi, Russia will host the 2014 Winter Games. But this isn't the first time South Korea will be hosting an Olympics event. Seoul was the host city for the 1988 Summer Olympics, which were hosted in Asia two other times, in Tokyo in 1964, and in Beijing in 2008. Japan is the only country in Asia that has hosted the Winter Olympics &mdash; in Sapporo in 1972, and Nagano in 1998. "PyeongChang presented a strong and inspiring project that enjoys massive support from the government and the public," stated IOC President Jacques Rogge. "I have every confidence that PyeongChang will deliver on its commitment and host excellent Games in 2018." "The South Korean project will leave a tremendous legacy as PyeongChang will become a new winter sports hub in Asia," added Rogge. More from Budget Travel: What happens when the Olympics move on? How to Score Tickets to the 2012 Summer Olympics North Korea welcoming U.S. tourists year-round

The Budget Travel Convert...Reporting from Greece

We can now travel to Cuba!

Finally, all Americans can now travel to Cuba, so long as they go with a licensed tour operator performing "people-to-people" trips. Although the Treasury Department still requires travel to Cuba to be "purposeful," you no longer have to be pursuing a degree program or be a journalist to go there, thanks to policy changes made by the Obama administration earlier this year. The trips are, however, meant to be educational, so you'll follow busy itineraries with meaningful interaction with the locals. In other words, you're not just hanging on the beach in Havana for a week. So far, the Treasury Department has only issued eight companies with people-to-people licenses. One such operator is Insight Cuba, which is offering several trips, including a long weekend in Havana, with 4-star accommodation, all meals, full-day guided activities, and in-country transportation, from $1,695. Each trip is limited to 16 travelers. Other outfitters are also planning people-to-people trips to Cuba, including the Harvard University's Alumni Association, Learning in Retirement, and Corcoran Gallery of Art and College of Art and Design. According to the The New York Times, there are currently 35 tour operators whose applications are still pending, including the National Geographic Society, the National trust for Historic Preservation, and Collette Vacations. MORE FROM BUDGET TRAVEL Should the government ease all restrictions on Cuba travel? Cuba prepares for an end to the travel ban Travel to Cuba: Highlights

More than 400,000 visitors may descend on Washington, D.C.'s National Mall in late August to witness the dedication of the Martin Luther King Jr. Memorial. What do travelers need to know to plan a visit? The four-acre site is set between the Lincoln Memorial and the Jefferson Memorial. It is the first piece of construction to be placed on the central axis of the Mall that doesn't commemorate a war or a president. It will feature a 28-foot-high granite statue by Chinese sculptor Lei Yixin, along with a crescent wall engraved with King quotations chosen by historians and writers. The social realist sculpture has been completed, but the site as a whole, funded by private donations, still needs $8 million for finishing touches. We hope it rises to the occasion. The dedication ceremony takes place on August 28 at 11 a.m., preceded by a planned concert at 10 and followed by another concert around 2 p.m. Free standing room areas will be open nearby, but tickets have already been given away for the seats in the stands. Expect long lines to form early in the morning. Giant television screens may be set up for guests who can't see the ceremony up-close, but details are still being worked out. Assuming all things go as planned, visitors will want to book now for lodging in the city during the weekend before the Labor Day holiday. The popularity of the upcoming event, along with customary family trips during summer peak season, is jacking up prices temporarily. Consider Budget Travel's picks for affordable hotels in the city and its environs. Be sure to also catch up on "The 20 Best-Kept Secrets of Washington, D.C." from our April issue. MORE FROM BUDGET TRAVEL The disappearance of cheap red-eye flights Open secret websites for booking hotels Rental car companies charge frequent flier mile redemption fees