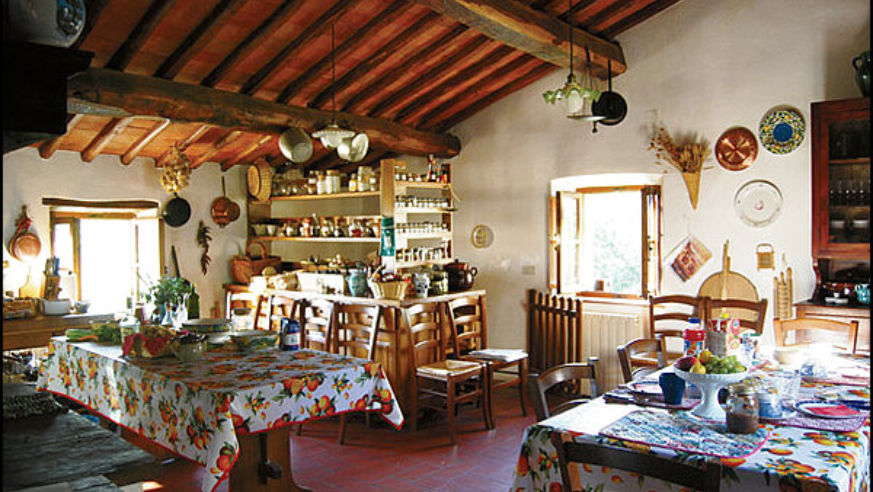 Two sisters based in Tuscany teach their students valuable lessons&mdash;beyond making gnocchi from scratch, stuffing tomatoes, and toasting like an Italian.

A week after I finished college, I was seated in the kitchen of a 13th-century villa in Chianti, wearing a crisp white apron. I was with my mother and three aunts, and we were learning how to crank the handle on a pasta machine just so to make perfect, thin sheets for ravioli. An open window overlooked the Tuscan hills, and we were sipping Chianti before noon.

For the five of us, getting here had been a months-long quest. As a graduation gift, my mom, Debi, and aunts Sally, Kathy, and Patti chipped in for an all-girls trip to Italy. We're Norwegian, and perhaps in a backlash against smoked fish and boiled potatoes, we'd long shared a love of nearly everything on the Italian menu. The highlight of the stay was to be two classes at Toscana Mia, a school run by Paola and Simonetta de'Mari, sisters in their 50s, out of their family's Florence apartment and estate in the town of Gaiole in Chianti. The de'Maris offer a number of options—from joining a one-day class in Florence to staying in the Tuscan villa, on four acres of vineyards and olive groves, and cooking nonstop. We signed up for two classes—one in Florence, one in Chianti—that would bookend our visit. We'd flown in from four states, and finally, here we were, rocking a mezzaluna over a pile of fresh basil. We had arrived.

My contribution to planning the trip was a bit of Florentine expertise (drawn from a few months spent studying in the city). My companions had all been to Florence before, and we longed to return—if for no other reason than to eat. I'd searched hard for the best cooking school around. The sisters and their setup at Toscana Mia reminded me of Strega Nona, a beloved book from my childhood about a grandmotherly sorceress who conjures pasta from a magical pot by blowing three kisses at it. Like Strega Nona, I envisioned Paola and Simonetta creating stunning meals from the simplest ingredients and dispensing Italian culinary secrets straight from the source.

But before getting our hands dirty, we had to work up an appetite. We'd rented a well-priced two-bedroom apartment near Florence's Duomo. The rooms facing north had views of the massive cathedral. Our balcony, facing south, overlooked terra-cotta-tiled roofs fading into the hillside beyond the Boboli Gardens. We ate our way through the city—Caprese salads, wood-oven Margherita pizzas, scoop after scoop of gelato. We even tried cold tripe salad—when in Rome, right?

For the first class, at our request, we were going to learn to make gnocchi from scratch. That's one of the great things about Paola and Simonetta. You tell them what you'd like to learn (within reason), and they'll accommodate, mixing and matching recipes passed down through their family. Their father, Luigi, an army general, hails from southern Italy, and their late mother, a countess, grew up in the north. Their repertoire, as a result, is a mixture of several cuisines—unusual in a country whose regions have such distinct plates.

Ready to work, we walked northeast from the city center to the de'Maris' apartment near Piazza Savonarola, a welcome window into a neighborhood where real Florentines live. Paola immediately gave us our tasks: kneading gnocchi dough; stuffing tomatoes with bread crumbs, garlic, and herbs; and mixing the ingredients for a simple cake made with lemon, ricotta, and saffron. Hours later, we took off our aprons, sat down with Luigi (who speaks next to no English), and devoured it all. The sisters were warm, approachable, and loving. They chuckled at our wide-eyed American questions, like "We're going to start drinking Chianti already?!" or "You call that a pinch of salt?!"—it was like adding two Italian aunts into the fold.

A few days later, we headed to the de'Maris' Chianti property. This time, we were part of a group of nine students. We got to know each other over bruschetta and chicken liver crostini. And then we rolled out sheets of ravioli and formed them around a mixture of ricotta, spinach, and nutmeg; roasted pork loin with fresh sprigs of rosemary; and whipped egg whites for a tiramisu. Once the aprons came off, we refilled everyone's wine glasses, celebrating our newfound skills.

Outside of the menus, which we've all re-created to varying degrees of success since the trip, Paola and Simonetta taught us many valuable lessons. We learned that as far as Italians are concerned, you can never have too much salt. Or garlic. Or pasta. We learned that a bowl of handmade gnocchi should have pieces that vary in size and shape. So, if you order it at a restaurant and your bowl arrives filled with gorgeously uniform dumplings, they were surely store bought and, thus, are inferior. We learned that you can judge a gelato shop by its banana gelato, which should be slightly gray in color, never an artificial yellow.

Most important, we learned how to toast like an Italian: Look directly into the eyes of each of your companions, one at a time, raise your glass, and say, "Cin cin" (pronounced "chin chin"). That was three years ago, and ever since, the five of us haven't stopped toasting each other with eyes wide open and a hearty "Cin cin!"—and then collapsing with laughter.

Getting There
Fly nonstop from U.S. hubs to Rome and then take a 1.5-hour rail trip on Trenitalia to Santa Maria Novella in Florence (airfare from $669, train from $127).

When to Go
Toscana Mia offers classes year-round, except the week before Christmas.

Booking Options
Half-day courses start at $202 per person for a four-hour session. If you choose to stay at the villa and take classes for five days, the cost (for lodging, meals, five classes, transfers, two guided tours, and more) adds up to $447 per person per night. welcometuscany.com.

COOKING SCHOOLS ACROSS THE GLOBE*

Oaxaca, Mexico
At Seasons of My Heart, TV star and cookbook author Susana Trilling helps students cook five courses per class, including one of the region's seven varieties of mole. seasonsofmyheart.com, from $50.

Phuket, Thailand
Pat Tienthong shares traditional dishes like laab kai, a Thai salad made with minced chicken and mint leaves. Her school, Pat's Home, operates out of her Phuket apartment as well as her hilltop bungalow above the city. phuket.com/thai-cooking, from $45.

Meknès, Morocco
In a three-story riad outfitted with individual cooking stations, students at Savor Morocco master delicacies like harira, a hearty chickpea and meat soup, and chicken tagine over semolina pastry. meknescookingschool.com, from $35.

* All prices are per person for a half-day cooking class

NEXT: SUMMIT A MOUNTAIN >>