Great (but not yet free) fares to Australia

Looks like those normally laid-back Australians are worried about one thing—the downtrodden global economy's effect on tourism. As The Age reported last week (and travel blog Jaunted picked up), the Australian government is mulling over a plan to pay for tourists' flights, as long as the tourists spend a certain amount of dough once they land (it would be something like $3,200).

There's no guarantee that plan will pass—but it's already possible to get yourself to Australia cheaply these days. Qantas, the country's national carrier, just cut one-way fares from L.A. and San Francisco to several cities, including Sydney, Melbourne, and Brisbane. Flights start at $299 each way, or $598 round-trip, before taxes (which we saw running about $120.) The deadline to book is by Friday—so act fast. Travel is through Oct. 24.

United Airlines has a competing sale, with rates from L.A. to Melbourne and Sydney starting at $299 each way before taxes (also around $120). Book by Monday for travel through June 15. Remember that the more flexible your dates, the more likely you are to get a deal (travel on weekends will almost always be more expensive).

You can get more info on Australia's official tourism site and even plan a One Week Walkabout package.

(Need to get inspired? Try watching the epic Australia; it's now out on DVD. Read what we said about it the 2008 edition of Movie Quest.)

Hundreds strip 'naked' to win free Aer Lingus flights Participants got "strategically placed shamrocks" to cover up a bit. What is it with Irish airlines? [Telegraph] Ryanair offers cash reward if you invent their next fee. And we thought the paying to pee was just a publicity stunt. [upgrade: travel better] Take five native New Yorkers&hellip; The Guardian asks for (and critiques) five locals' advice on hanging out in the city. Immigration Explorer A county-by-county map shows the origins of first-generation immigrants . [New York Times] Fear of Flying Completely non-actionable advice for making it into the air. [Morning News] Scoring a Restaurant Table Online OpenTable.com, Restaurant.com, and a host of others. [Wall Street Journal] Australia Says 'Mayday, Mayday, We'll Pay You To Visit Us'. A proposal that the Aussie government pay for your flight. [Jaunted] Sears Tower to be renamed Willis Tower. The nation's tallest building has a new name, but will anyone use it? [Chicago Sun-Times] Man sues American Airlines for revoking his lifetime travel pass. He paid $250,000 20 years ago for lifetime first-class seats. [Gadling] 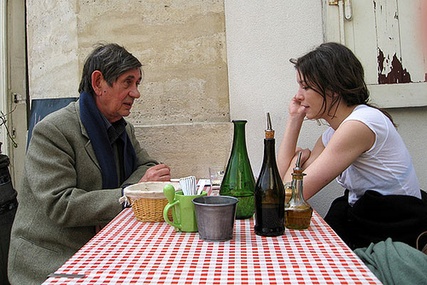 A long and luxurious lunch is sometimes just what the doctor ordered. Other days demand a quick bite on the run. Between the splurge and the sandwich lies the average d&eacute;jeuner, running &euro;10&ndash;25 at most places. Keep to the low end of that scale by steering away from touristy joints and by following some of these tr&egrave;s fran&ccedil;ais lunch tips. &bull; Skip the soda. French people rarely drink the stuff, and almost never touch it during meals. It's usually expensive, around &euro;4 ($5.20) for a small iceless glass that doesn't come with a refill. Do as the locals do and order un carafe d'eau. This pitcher of tap water is free and, contrary to reputation, even more popular than wine at lunchtime. You may have to ask your server twice, always following this with s'il vous pla&icirc;t. &bull; Order less food. I felt obliged, when I first started dining in Paris restaurants, to order the full three courses (entr&eacute;e-plat-dessert) at every meal. Later I realized that the locals were tailoring the formula to fit their midday hunger: a starter + main, a main + dessert, or just simply the plat du jour. The money and calories that you save will serve you well later on at the p&acirc;tisserie. &bull; Tip like a Frenchman. As a former waitress, it took me a long time to shake the habit of overtipping in Paris restaurants. I knew that French waiters made a real salary (unlike their American counterparts, who earn only half the minimum wage), but I still felt cheap in only leaving small change. Nevertheless, locals leave no more than &euro;1&ndash;2 per person for a typical lunch. Most often, a &euro;2 coin is perfectly acceptable for two people. So keep some change handy: You'll be saving money and following local custom at the same time.

Questions for an editor going to Rome?

I'm leaving in a week for Rome, where I'll be checking out some new affordable places to stay, tackling the Vatican in an afternoon, and searching for my own local favorites. I've got my questions, but I'm wondering what you would like to know about Rome? Maybe it's something about getting around the city, Roman etiquette, or non-touristy lunch spots. Now's your chance to ask, and I'll see what I can fit in.

We asked, and you came through with gorgeous photos of Ireland's emerald countryside, craggy coastlines, majestic castles, cities like Dublin and Cork&mdash;and even marching bagpipers in Waterford's St. Patrick's Day Parade. See the photos here. And Happy St. Patty's!