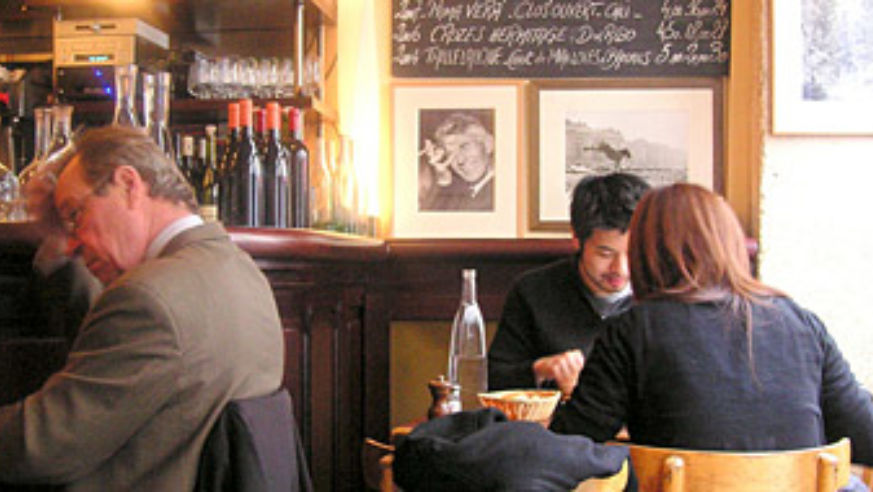 A funny thing happened last year while I was living on rue de Belleville. The street suddenly became hip. Not because of me, of course, but because Gourmet's correspondent in France, Alex Lobrano, penned a lengthy article spotlighting the lesser-known quarters of Eastern Paris. He wrote about Belleville with respect, or at the very least curiosity, and it was a source of some local pride. But it was the source of some anxiety, too. Would our cafés be overrun with tourists? Would we still be able to book a table at our favorite small bistro?

I needn't have worried, because the fact remains that very few visitors are willing to venture "all the way" to Belleville. Never mind that Belleville is only a ten-minute subway ride from the center. The perception remains that this neighborhood is far away. It also has a reputation for being filthy, a rep that dates back to Belleville's industrial days and that has persisted throughout waves of twentieth-century immigration. The accusation is not entirely untrue—sidewalks and garbage bins do, in outlying areas, receive less city attention than in the postcard center.

Some people also stay away from Belleville because it doesn't feel like Paris. On this hill, the geraniums have been replaced by graffiti, and bakeries are outnumbered by Chinese barbecue. The local faces reflect the country's immigration past: Greeks and Armenians from the 1920s, German Jews from the 1940s, Algerians and Tunisians from the 1960s, and most recently (and visibly), the Chinese. This sort of diversity makes some travelers feel insecure, but I can testify that Belleville is a safe and friendly place.

Belleville is unabashedly populaire—of the people—with a strong sense of working-class pride. Its legacy as a hotbed of rebellion and creativity survives today. The area is packed with musicians and there are more artists working here than in any other Paris quarter. (It's no surprise that the annual Portes Ouvertes festival is held here.)

To discover this neighborhood, I recommend taking the subway line 11 to Pyrénées. As you begin to descend the rue de Belleville, keep your eyes open for a glimpse of the Eiffel Tower twinkling in the distance. One of the first sights is on the southern side of the street at 72 rue de Belleville. Here, a plaque marks birthplace of the Edith Piaf, subject of last-year's Academy Award-winning film La Vie en Rose. Unveiled by cabaret star Maurice Chevalier, the plaque reads "On the steps of this house was born in the greatest destitution Edith Piaf whose world would later take the world by storm."

A few steps further down the hill, you'll see the rue de Rébeval snaking off on your right. This up-and-coming street is home to a growing number of good restaurants, my favorite of which is Le Chapeau Melon. Run by Olivier Camus, this wine shop and restaurant serves outstanding meals on Tuesday through Saturday nights. The four-course menu €29 ($40) offers no choices, so be prepared to put yourself in the capable hands of the chef. Pick a bottle of vin naturel (untreated organic wine) from the shelf, or ask them to pour you something by the glass (92 rue Rébeval, 19th arrondissement, 011-33/1-42-02-68-60). Zoë Bouillon, a cheap and cheerful lunch place, is further down the street at 66 rue Rébeval. This brightly-colored soup bar also serves fresh salads and desserts, along with wine and good coffee.

Coming back to the rue de Belleville, cross the street and then make an immediately left to find one of the best bistros in Paris. Le Baratin is a poorly kept secret that's frequented by journalists, chefs on their day off, and in-the-know food travelers. Their two-course lunch at €16 ($22) is one of the best deals in the city. Dinner a la carte is also outstanding—traditional bistro fare tweaked by the creative hand of Raquel Carena—but be prepared to spend closer to €45 ($61) per person. The bill at night has a tendency to climb because of their exceptional selection of natural wines (3 rue Jouye-Rouve, 20th arrondissement, 011-33/1-43-49-39-70).

Continue south along the rue Jouye-Rouve and you'll hit the Parc de Belleville, one of the city's more interesting parks. The panoramic view from the top (at rue Piat) is what earned this neighborhood the name of belle vue. In good weather, the park is filled with people reading, kissing, playing soccer, eating a picnic, or simply gazing out over the horizon. It's a long and sloping park, descending all the way to the bottom of the hill and dotted with fountains and flowering trees along the way.

When you exit the park (after a short nap in the grass), you'll want to check out large-scale murals in the place Fréhel at the intersection of rue de Belleville and rue Julien Lacroix. The one on the left was created in 1993 by Ben Vautier and depicts two workers lowering a giant blackboard that reads 'Il faut se méfier des mots' (beware of words). The other work—a painting by Jean Le Gac that's several stories tall—portrays a detective who's looking for clues along the rue Julien Lacroix.

Continuing toward the bottom of the rue de Belleville, you'll see a pack of Chinese eateries and a good number of divey cafés. The most historic of these is La Vielleuse (2 rue de Belleville), but my favorite is Aux Folies. This building at 8 rue de Belleville used to host performances by Edith Piaf, Maurice Chevalier, and other stars of the cabaret scene. Its lively terrace today serves as a microcosm of the neighborhood, mixing old-timers, young hipsters, and plenty of middle-aged "bobos". Sitting here on a sunny day, drinking a cheap demi (small beer) and watching the motley procession of people along the rue de Belleville—this has come to feel utterly like Paris, and also a bit like home.

We asked Gourmet 's European correspondent, Alec Lobrano, for his advice on dining cheaply but well in Paris (55 reader comments)