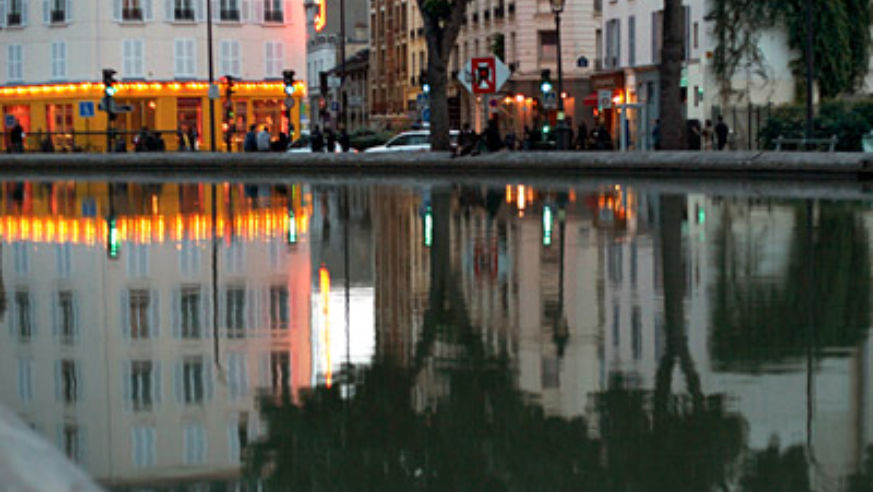 Back in the day (the early 1800s) the Canal Saint-Martin was dug for the express purpose of relieving dysentery. How romantic! Connecting two big rivers—the Ourcq and the Seine—the canal provided fresh water and freight by boat. Two hundred years later, its primary purpose is pure leisure.

Winding gracefully through the 10th arrondissement from a point near République, the "open" portion of the Canal (some parts are underground) is perpetually lined with picnic baskets. Parisians of all ages, and an increasing number of visitors, come here to sip rosé, stroll hand in hand along the water's edge, and reenact the stone-skipping scene from Amélie.

They also come here to shop. The west side of the canal has become a destination in recent years, with fashionistas flocking to The Kooples (32 rue Beaurepaire), Médicine Douce (10 rue Marseille), Antoine et Lili (95 quai de Valmy) and Stella Cadente (93 quai de Valmy) and Agnès B (13 rue Marseille for women, and 1 rue Dieu for men). I also love the design bookstore Artazart (83 quai de Valmy) for glossy coffee-table tomes and a range of Moleskin notebooks.

After shopping, it's nice to kick back with a drink at hipster central Chez Prune (36 rue Beaurepaire). This café is a neighborhood institution, along with its rival across the water, Le Jemmapes (82 quai de Jemmapes). The latter specializes in Belgian beer, sold in takeaway cups for sipping along the water.

When appetite strikes, there are plenty of cheap and cheerful options near the canal. My absolute favorite, which is open only for lunch, is the Cantine de Quentin (52 rue Bichat, 011-33/1-42-01-40-32). They offer a two-course menu on weekdays for €14 ($19.50), with updated classics like smoked duck breast with carmelized apple. Another haunt is Le Verre Volé. This shoebox-sized bar à vins specializes in natural wine and serves a small but delicious selection of charcuterie, cheese, and hot dishes. They're always packed, so be sure to reserve (67 rue Lancry, 011-33/1-48-03-17-34).

If you're ready to take a break from French food, Maria Luisa and Pink Flamingo both make great pizza, with the latter delivering by bike anywhere along the canal. For delicious and cheap Cambodian, the locals line up nightly at 8:00 p.m. to give their name at Le Cambodge. They then head to wait by the water's edge until the restaurant calls with a ready table. Brand-new on the scene is Rosalito (52 rue René Boulanger, 011-33/1-77-35-92-11), a tapas bar from the same owner as (foodie fave) Da Rosa. Small plates range from €2–9 ($2.80–$12.50), with homemade sangria for €5 ($7).

And finally, as I wrote about in my earlier blog post "Paris Bakery Buzz", no trip to the canal is complete without a stop at Du Pain et des Idées. Christophe Vasseur was named the city's best boulanger and sells his wares at a beautifully restored hundred year-old bakery. Try the chausson à la pomme fraîche—it's unlike any apple turnover you've ever had (34 rue Yves Toudic).

More from our Affordable Paris series