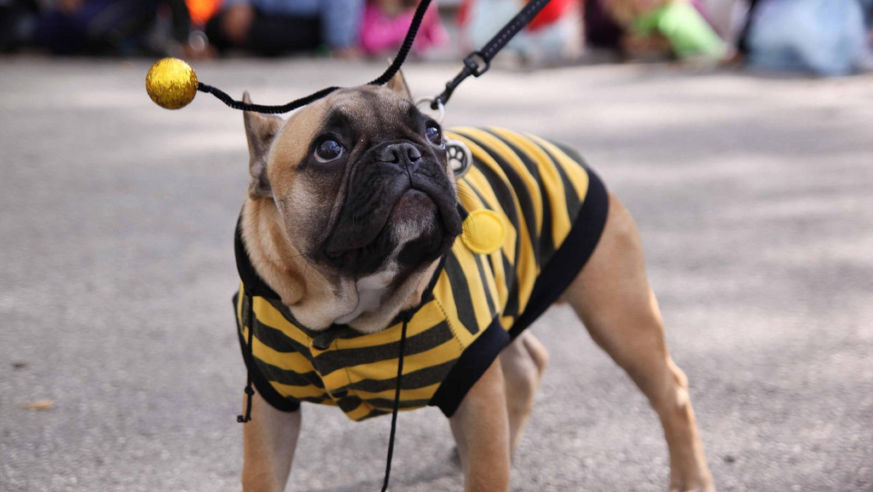 Is there anything cuter than a bulldog dressed up as a bee?

Ok, imagine the most creative Halloween costume you've ever seen—now imagine that same costume on a dog. That's what the Great Pupkin is all about. (See costumes from previous years!)

For fourteen years the residents of Brooklyn have been dressing up their pooches for a Halloween celebration that culminates in a contest and prizes for the most outrageous getups. The event is sponsored by Fort Greene PUPS, a collective of pet owners in Fort Greene, Brooklyn, and draws 300-400 guests annually, making it the largest of its kind in Brooklyn.

If you'll be in New York for Halloween it's worth the trip to Brooklyn to witness the event. The contest takes place on Saturday, October 27 (rain date: Sunday, October 28) in Fort Greene Park, which is located between Dekalb and Myrtle Avenues in downtown Brooklyn (closest subway stop is the Q/R at Dekalb Avenue). Registration opens at 11am and judging starts at noon sharp. Fortgreenepups.org

Just out of curiosity, I did a quick Google search to see how many other communities organized costume contests for critters. It seems that there are plenty of organizations that encourage folks to send in photos of pets in costumes, but just a handful of contests where participants gather and are judged in person. But there are a few such events. Ocean City, New Jersey, for example, decided to get in on the action a couple of years ago and is on their third dog costume contest, which will take place on October 20. The Humane Society of Sarasota, Florida is on their 15th year of hosting a pet costume contest, which is happening this year on Saturday, October 27. In Little Rock, Arkansas there is a pet costume contest on Saturday, October 20 with winners such as Most Creative Costume and Pet/Owner Look-A-Like. I'm sure there are others that happen across the country too—if you know of any, please share them with us here!

Regardless of how you feel about Halloween or pets or the intersection of the two, you're bound to get a kick out of this slide show, which gives you some idea of just how invested folks get in the Great Pupkin contest. I dug through Fort Greene PUP's archives to put together a slide show of some of my favorites: Lady Gaga, Big Bird, Dr. Seuss. Someone decided to dress up their lab like a tennis ball.  Someone else built an entire float around their pup to make it look like she (he?) is the ruler of the sea...and the list continues.

Will you be traveling with your pet for Halloween?