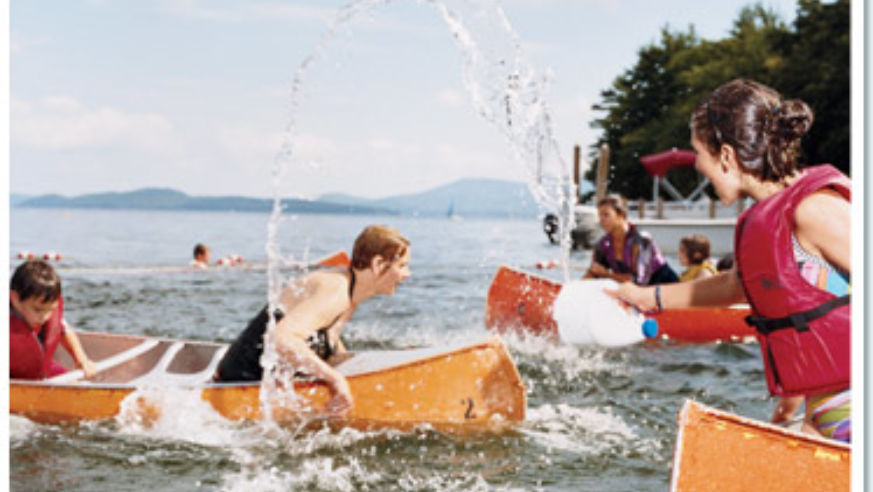 In an era when the family dinner is hard enough to schedule, a week at family camp has real appeal. We visited one in New Hampshire and asked campers to tell us why it floats their boats.

Picture the classic sleepaway camp...cabins in the pines, a fully outfitted lakefront, kids with bug-juice mustaches. Add parents and even grandparents to the mix, and you have a curiously little-known phenomenon: Family Camp, weeklong programs in which all ages are welcome. We visited New Hampshire's Sandy Island, a 112-year-old, YMCA-owned property in the middle of Lake Winnipesaukee. As campers sailed, fished, and clobbered each other at tennis, we got them to tell us what keeps them coming back here summer after summer.

Seth, a pilot with Delta, comes with his two daughters while his wife stays home. "She says camp is too much like camping"

Norm, the family patriarch, wisecracks, "The only thing I've ever caught on this island is a cold!"

Adam is known for grabbing the karaoke mike and doing a long, soulful late-Elvis imitation for a pack of 6-year-olds.

Millicent is the one on the sidelines in morning stretch class, doing her own extreme-yoga positions.

Why is Caroline smiling? She won the camp limbo contest!

Duncan Begg, a mechanical engineer at Penn State's Applied Research Laboratory, designs torpedoes for the Navy. Suffice it to say, he's a natural at sailing, a skill he picked up racing Lightnings as a boy on Long Island Sound. Friends lured Duncan to Sandy Island when he was a college senior. A few years later, he returned to camp with his then-girlfriend, Patti, an elementary school music teacher. These days, whenever the wind picks up on Lake Winnipesaukee, the whole family (including their 18-year-old daughter, Victoria, who had to be at school this past summer) hits the water. "Sometimes we have to do a bit of nudging," says Duncan, "but once we're all out there, braving the elements, we instantly go into 'relax' mode."

Years attending: 23
Favorite ritual: Every summer, for a good workout, Duncan and Patti walk the mile and a half around the island in the water—waist deep aside from the short section they actually have to swim.
Reason to wish for a rainy day: "There's always a fire going in the lodge," Duncan says.
Sandy Island souvenir: Patti's braided wristlet made by her pal Patrice: "Last summer, my friends and I joined the teens and had our own friendship bracelet craze."
Banner event: The salad bar's debut 10 years ago.
Their cabin: On the Rocks. Perfect, explains Patrick, because they can "walk out the front door and catch crayfish right off the shore."
Why We Come: "After seven days at Sandy, it feels like so many unnecessary stressors have been stripped away. I always leave determined to make real life feel more like camp." —Patti

At the age of 26, when Alice Erickson met her future husband on the Sandy Island dance floor, she was already one of the old-timers. "I was 9 when I first came with my family," says Alice, now 85. "We had kerosene lamps, and everyone bathed and washed their clothes in the lake." Over the years, she's welcomed the addition of electricity, plumbing, and refrigeration ("we used to get blocks of ice from the lake"), and she's watched the saplings in front of the lodge grow into towering pines. During her 71st year at Sandy, Alice played canasta and cribbage with her daughter, son, and daughter-in-law on the porch overlooking the lake. She also rediscovered shuffleboard. And she never missed a dance.

Years attending: 71
Shuffleboard score: Alice 17, Tom 8
Greatest camp improvement to date: Flush toilets.
Amazing fact only Alice seems to know: John Updike and his first wife worked at Sandy—he in the office, she in the store. Updike's 1962 short-story collection, Pigeon Feathers, opens with "Walter Briggs," in which a couple reminisce about a family camp. It's filled with descriptions of people Alice recognizes, including "a chain-smoking failed minister" who ran the place and a camper with "nostrils shaped like water wings." As for Updike himself, "I wish I had paid him more attention," says Alice.

Singles tennis, mixed doubles, log wars, basketball championships, the big softball game—at virtually all the camp sports competitions, you can bet that bank manager Jim Geuther will be the first to show, and his kids (once they roll out of bed) will be right behind him. Jim's wife, Laura, came to Sandy with her family as a child. She and Jim, high school sweethearts who still live in their Ohio hometown, have been bringing their family to the island since 1997. Along the way, the Geuthers have explored plenty of vacation alternatives, including sailing the Abaco Islands in the Bahamas, their all-time favorite. "But everyone agrees," says Laura, "Sandy is a very close second."

Years attending: 13
Year-round camp reminder: Jim's psychedelic boxer shorts, worn under his banker's suit—"On Wednesdays at camp, everyone tie-dyes up a storm."
Favorite food: The Sunday omelets. "The rest is marginal," says Kate, "but there's always peanut butter and Fluff."
Request to the management: Bathrooms in all the cabins.
It happened here: "During capture the flag, Dad collided with a player and then had no idea where he was," says Dan. "Now, it's the one game he skips."
Why We Come: "After 13 summers, we have lifelong friendships with so many other families. I'm sure that someday our kids will want to share Sandy with their kids." —Laura

THE FIRST-TIMERS
Donald Fraser and his 5-year-old daughter, Fiona, from Rosendale, N.Y.

What's it like to be a newbie camper at the age of 52? That question arose for Donald Fraser after his wife, Lori Gross, a former Sandy Islander, called the camp on a whim and lucked into a cabin thanks to a last-minute cancellation. And so, with daughter Fiona, the family (Lori is a massage therapist and Donald an educator at a historic mansion) drove north, lugging a cooler of blueberries and energy bars. Although concerned the place would be cliquey, they made their first friends on the boat ride over. And Fiona immediately settled into the Little Red Schoolhouse, a gingerbread-trimmed building where kids 3 to 5 spend their mornings singing, painting, and planting seeds. Freed up, Lori headed to her old hangout, the crafts cabin, while Donald put his name at the top of every sign-up sheet. By the end of the week, he had taken tennis and sailing lessons and tried to get up on water skis, all firsts for him. Next year's goal? "Learning the camp dance steps."

Years attending: 1
Talent-show performance: Donald and Lori played an old-time Appalachian banjo duet. The two passed most afternoons strumming on a bench under the pines.
Craft-shop creations: A silver pendant and a T-shirt with a batiked dragonfly.
Favorite hangout: The kid-filled sandy beach on the island's northern end.
Fiona's description of camp: "It was like heaven."

In 1982, when Britt Ward and his (now ex-) wife first arrived at Sandy, it was 14-year-old camper Liz who showed them the shuffleboard court and other key attractions. In 1995, Britt and Liz, each newly divorced, were the only single parents during their week at camp. And each had a young son, so they "kept crossing paths at all the activities," says Britt. Their wedding took place two Augusts later at the Sandy Island outdoor chapel, with the entire party, including bride, groom, and fellow campers, in tie-dye. And in quick succession, their kids Michael, Richard, and Aurora arrived—and joined the fun.

Years attending: Liz: 32. Britt: 28. As a combined family: 13
Most useful lessons learned: How to swim (Michael), how to dance (Aurora and Richard), how to open a bottle using a lighter (Devon).
Secret perk: No need to write letters home—at least 30 relatives from Liz's family come the same week every summer.
Annual highlight: The water carnival, a day of canoe wars, shaving cream races, and log fights.
Favorite camp dance: Liz's vote: Rock Lobster. "We jump around, we spin, and at one point, everybody gets down on their knees and starts banging on the floor."

THE NATURALISTS
Maggie and Jeremy Weiss, and their son Shiloh, 3, of East Calais, Vt.

Maggie Weiss hails from a family that's been coming to Sandy Island for 50 years, not a single summer missed. In fact, she made her first visit while in her mother's womb. "It's a real community," she says. "One year, word got out I was planning to pierce my nose, and the whole camp tried to counsel me against it." She ignored the advice, and returned with a pierced lip, too. In 2005, she and Jeremy Weiss, an organic-seed technologist, were married on the island in a silent Quaker-style service. Maggie is now a graduate student in speech pathology, and she and Jeremy grow most of their family's food. At Sandy, the fare may be a tad processed for their taste, but they get to take a real break—check in with four generations of relatives, play guitar, stroll the woods, and give their boys, Amariah, 11, and Shiloh, 3, that first taste of freedom Maggie remembers so well.

Years attending: 32
Memorable camp moment: The summer Jerry Garcia died, Maggie was 16: "That night, the most unforgettable bloodred full moon appeared over the lake."
Wish list: Better coffee, organic food, more yoga.
Thing we most look forward to: Says Maggie, "I love hearing the water lapping on the rocks outside our window at night."
Why We Come:"We're all family; it feels as if there are 100 sets of eyes looking after each of the kids on the island." —Maggie

BEHIND THE SCENES
This story was shot last August during week six at Sandy Island Family Camp, situated on its own private island on Lake Winnipesaukee in New Hampshire. Campers stay together as families in cabins with bunk or twin beds and screened windows; a few setups have private bathrooms, but most are communal. The nearest airport, Manchester-Boston Regional, is an hour and a half away. The 10-minute boat ride to the island leaves from the Sandy Dock in Mirror Lake, N.H. Camp reservations can be tricky to come by, but slots are often available at the beginning and end of summer. There are organized kids' programs for ages 3 through 12.